Just one week left to catch this exhibition at Kyoto University Museum: 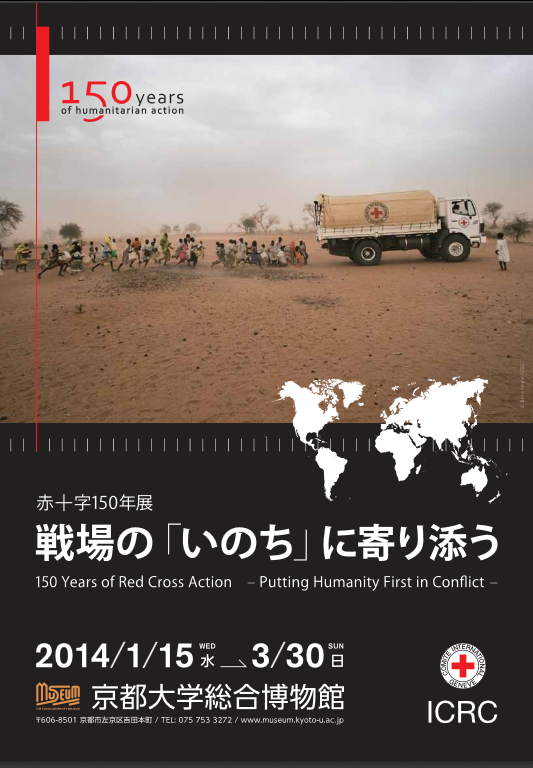 “In 1863, the International Committee of the Red Cross (ICRC) was founded to save wounded on battlefield. This then gave birth to the International Movement of the Red Cross and the Red Crescent. In 1864, the First Geneva Convention was drafted, which later developed into four conventions as World War II showed the disastrous consequences to civilians without such protection. Nowadays, the Geneva Conventions are the only truly universal treaty, which every state on earth has signed.

As in the past 150 years, the nature of war and other crises evolve continuously, raising new challenges for humanitarian action. As the guardian of international humanitarian law, the ICRC has the sole ambition to protect and assist victims, serving the most vulnerable. Civilians must be protected and human dignity has to be respected at all times, even in conflict. The human cost of conflict and violence remains unacceptable.

Everyday, innocent people are caught in battle and lose their lives; families are separated by conflict and desperately seek news from relatives. Everyday, children are forcefully recruited by armed militia and sent into combat; and everyday women face sexual humiliation and violence. People are deprived of their freedom and sometimes are the victims of natural disasters compounding their suffering.

Marking the 150th anniversary the ICRC proudly presents ‘150 Years of Red Cross Action’. This exhibition displays historic and current material from conflicts all over the globe; highlighting the ICRC’s enduring effort. The exhibition shows the power of human strength from those suffering, along with the changes that can be made through cooperation, resilience and compassion – young or old, we can all make a difference!

Looking to the future, as humanitarian needs evolve, so too will the ICRC.”