The upcoming show by Damo Suzuki’s Network at Urbanguild is definitely one you shouldn’t miss… Believe Me! 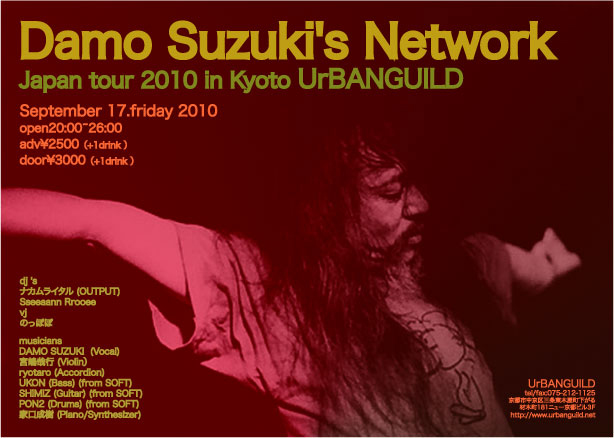 Suzuki is best known as the vocalist for Cologne based band Can from 1970-1973 – taking over from the original vocalist Malcolm Mooney following the recording of their first LP Monster Movie.

The following 3 records by Can that featured Suzuki on lead vocals (Tago Mago, Ege Bamyasi and Future Days) are regarded as their best and most influential, and are praised for their experimental sound – combining spontaneous composition free jazz, cut and spliced production, live sampling, ambient passages and…. the unique singing style and lyrics of Damo Suzuki. These are groundbreaking recordings that still sound fresh 40 years after they were released.

After leaving Can in 1974 Suzuki retired from music – but returned in 1983 forming The Damo Suzuki Unit. Since then he has been bringing together different sets of musicians (interestingly described as “sound carriers” ) to perform with him building up a network as he tours around the world. Details about the activities of the Damo Suzuki Network can be found here.

For the performance at Urbanguild the core of the group is made up of members of SOFT: Ukon on Bass, PON2 on Drums, and SHIMIZ on Guitar. Take a look at this clip of one of their live performances – it really has a kind of slow build up and subtle rhythmic shifts reminiscent of Can.

The other members of the group are ryotaro on Midi Accordion, 宮島哉行 on Violin, and 家口成樹 on Piano/Synthesizer.

So expect some free flowing improvisatory workouts with Suzuki’s stream of consciousness vocals floating through the mix!!

The evening’s entertainment will also include DJ’s ナカムライタル (OUTPUT) and Myself. In addition there is a VJ: のっぽぽ.

We’ll be spinning discs until 26:00 if the flyer is to be believed! So…. make sure you have your free-form experimental dancing shoes on!!

Time: ２０:00 – ２６:00
Tickets in advance: 2500yen+1drink/On the door: 3000yen+1drink
Location: To find Urbanguild, from Sanjo Dori go down Kiyamachi Dori (this is the narrow street running alongside Takase stream) Urbanguild is on the east side (left hand side as you walk down from Sanjo) after approximately 150 metres. It’s on the 3rd floor of New Kyoto Building – access by elevator or stairs. Here is a map.

Thanks Sean! I shall be posting videos from Sean’s JunKroom event last Friday later in the week.