Each year, as the anniversary of the 3/11 disaster in Tōhoku approaches, anti-nuclear protestors here in Kyoto hold a rally and march to protest the government’s pro-nuclear policies. On Saturday March 7th this protest will take place once again. A year ago Ted Taylor joined this same rally and reported on it for our book, Deep Kyoto: Walks. As the marchers once again gather in Maruyama Park, the time would seem opportune to revisit that report. We join Ted as the demonstrators begin to move from the Park into the streets of Kyoto…

Excerpt from A LONG MARCH by Ted Taylor

…Most around me are in their 30s or 40s, being political only to the extent that they want a safe home and future for their children. As there are fifteen reactors just to the north of us here in Kyoto, they have great reason for concern. Regardless of personal beliefs about whether or not nuclear power is safe, the Fukushima disaster proved how unsafe they can be under current conditions. While the marchers here today are most certainly against even a single one of the fifty inert reactors in Japan coming back online, an even larger percentage of Japanese takes a more pragmatic approach, and would accept some of them back online as a temporary solution until other means can be found, though with greater safety protocols in place. As I walk I ponder this, and the passing buses and automobiles douse us in their exhaust, a reminder of equally unpleasant alternatives.

We’ve moved up Shijō-dōri by now, following the parade route that the yamaboko floats take during Kyoto’s renowned Gion festival. The festival began as a purification ritual to appease the gods thought to cause fire, floods and earthquakes. Perhaps in this nuclear age, our group of walkers serves as a new type of float. Today too, our procession is being observed by the thousands of people out shopping and sightseeing, many of whom have bemused looks on their faces. None are more amusing than the confused looks on the faces of foreign tourists. A worker at one of the tourist shops stands out front offering samples of yatsuhashi to passersby. For a moment I’m tempted to break ranks and taste one of these famed sweets, as it seems like a very Kyoto thing to do.

Our bit of street theater merges briefly with the crowds just coming out of the Minamiza, and then we’re off again, crossing the river and making an eventual right turn onto the bustling Kawaramachi. As the chants now turn to “Kyoto o Mamorō!” or “Protect Kyoto!” I look up this canyon of towering steel and glass, wondering if there is anything left to protect. 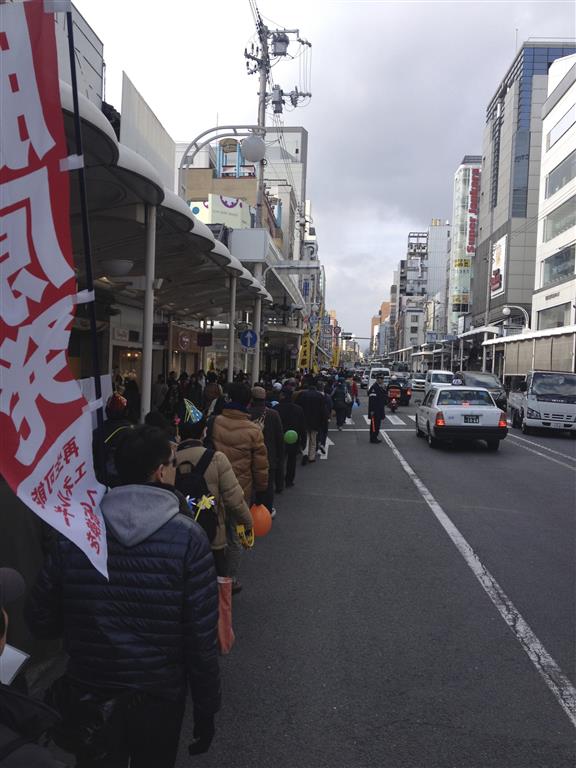 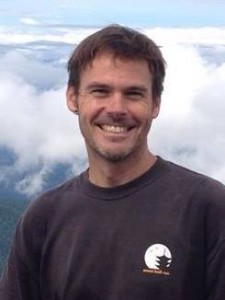 Based in Kyoto, Ted’s work has appeared in The Japan Times, Kyoto Journal, Resurgence, Outdoor Japan, Kansai Time Out, Elephant Journal, and Skyward: JAL’s Inflight Magazine, as well as in various print and online publications. A Contributing Editor at Kyoto Journal, he won the top prize in the Kyoto International Cultural Association Essay Contest. He is currently at work on a series of books about walking Japan’s ancient highways. Ted blogs at www.notesfromthenog.blogspot.jp.