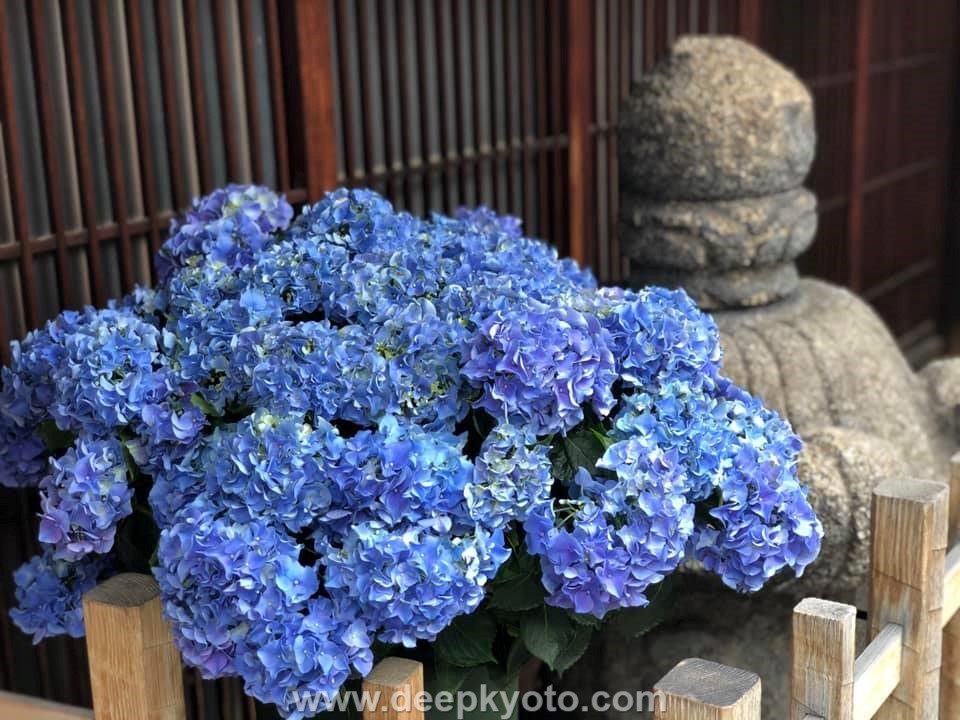 Rainy season and the living is claggy. It usually arrives in June, and while it doesn’t rain all day every day, the humidity tends to build and build so that when the rain does fall it brings with it great relief. The clouds do tend to linger, which can create a feeling of claustrophobia, but unlike the flat skies of the summer months to come, the clouds do add a bit of texture and depth to photos.

Over time, you learn to schedule around the rain. Twice I choose a day to do this month’s walk, and twice I have to cancel. But as the coming of rainy season also heralds my annual pilgrimage to renew my international driver’s license (before my usual summer trip abroad), I was forced to leave the house, and a personal errand once again dictated the course.

Kyoto-ites will recall the frustration of having to trudge all the way out to Fushimi to visit the Licensing Center, but luckily things have shifted to the center of the city. So I find myself starting near Kyoto Station, then follow Karasuma and wrap around Gojo-dōri to where it just about meets the broad Kawaramachi.

Lying one street west of Teramachi, Gokomachi crosses land previous owned by the temples there, their holdings having been stripped by Toyotomi Hideyoshi when he rebuilt Kyoto in the late 1500s and sought to diminish the power of the powerful Buddhist hierarchy. They would have been witness to frequent reminders of Hideyoshi’s strength, since he designated Gokomachi as the street up which he would march his army on his visits to the Emperor.

The quiet neighborhood betrays none of that today, though I appreciate the triangular face of the Shōei building that faces the southern end of the street like the poised edge of a waiting sword. Just up from the corner I note a small torii gate made of wood that has been affixed to the wall of a small restaurant, a familiar talisman expected to stop the intoxicated from urinating there.

With the rains, hydrangeas are simply everywhere. I come soon to the head offices of the Masugi company, established in 1713 as a manufacturer of ‘smoking devices,” which would have included the little kamasu pouches to carry one’s tobacco. In about 1920, this technology was shifted to the making of fashionable handbags. I enjoy the fact that there is a bicycle rental shop across the street, for smoking while bicycling is almost de rigueur with Japanese men over 70.

These days, young people are educated not to smoke, and evidence can be found in the textbooks on display in the Kyoto Municipal Museum of School History. Incredibly, within one year of the end of the feudal system there were already 64 primary schools across the city, including this one, Shimogyo Number 11. Closing in 1998, it was repurposed as a museum six years later. When speaking of Japanese education, the name Ninomiya Kinjiro inevitable comes to mind, and figures of the little lad can be seen throughout the country, reading a book as he walks along with a load of firewood on his back, never missing the chance to study. The multitasking certainly paid off, and the boy grew up to become a famous economist and agricultural reformer, in the waning days of the
Shogunate.

At Shijō, I note that the figures of the twinned Wind and Thunder Gods Fujin and Raijin have been removed from the building from which they looked over strolling shoppers. It is a sad fact that as Shijō itself goes more upmarket and attracts those ubiquitous name brands, some of Kyoto’s character goes out not with a bang, but softly, on a breeze.

The grid of streets that follows is arguably one of the most interesting, with local shops standing shoulder to shoulder. One could do worse on a rainy afternoon than to zigzag around and explore. For example, on this block alone is the London Art Factory, (which grabs my attention with its logo like the London Underground); Sidewalk Gokomachi, which is a take away tea window (contributing to the sidewalk eating trend that infuriates the locals; the old Kinmata Ryōkan, an exclusive machiya kaiseki place that is now a national treasure due to its origins as an inn for medicine peddlers back in 1801; and Yak & Yeti, favored Nepalese curry joint of long-term expats.

I Frogger-walk across over a bustling Nishiki market (and if you don’t get gauged there, you can always visit SCAMP BodyPiercing & Scarification further along Gokomachi). A little sweet shop on the corner counts itself among the Foodie Top 100 worldwide. The feeling of rainy season is enhanced by a noren emblazoned with the entire text of Miyazawa Kenji’s famous ‘Not Losing to the Rain,’ a poem that resonated in the poet’s native Tohoku after the crippling 2011 triple disaster. And in it I too find inspiration, for as I continue my walk, I intend very much to “Watch well and listen closely.”

Another shop has a name that keeps the rain theme: Shopping Season. A little alley leads off into a warren of little shops that feed the parallel Teramachi shopping arcade. There is also the “Shiawase no Pankeki,” or Happy Pancake, which must do a booming business on International Pancake Day, traditionally held on the day that precedes Lent. Finally, there is the souvenir store The Souvenir Store, whose logo seems inspired by that of The Gong Show.

And with that, the nature of things changes. First there is the unpretentious Cinq Ryokan, which has that cool, traditionally-restored-Kyoto look that I’ve written of before, though this one predates the current guesthouse explosion by many years. There is also the inspired St. Andrews church, which on closer look proves to be a wedding chapel. Up at Sanjō, I spy a delicatessen, though sadly not of the type I miss from the days of my boyhood on the American East Coast.

An array of vintage and second hand clothing shops leads me the rest of the way to Oike. Over that boulevard, I find the Spanish restaurant La Masa, whose tantalizing aroma reminds me that the clock is ticking closer to lunchtime. The shop is a noticeable exception to a street very rich with French food. I’ve counted at least four restaurants and two cooking schools by now.

All these reminders of France leads me to notice a little brick church, authentic this time, the structure dating to 1913. Equally uplifting (to me) is Café Mole, which I used to patronize regularly on my (pre-resident) visits to Kyoto. Run by the bass player for the local band Soft, a man whose fingers can not only produce some intricate and hypnotic rhythms, but can whip up a pretty tasty curry.

An Italian place holds its own against all the French, and one with the geographically incongruous name of Macedonia Yuki. That surname, the 170-year old Miso makers at Kantoya, and the Jokei-ji temple bring things back to the East. The latter, like the churches I’d passed before, is closed to the public. However, peeking over the locked fence I see that the temple does run a café/bar, about which I’m unable to solicit further information.

The trees of the Imperial Palace grounds have grown taller with each block, and on this final one they begin to tower. On the corner is a sign whose cheery surf-like logo reads, Hang-out, Optional Shop. But I didn’t feel the need of their services today.

I am tempted to pop into the street’s eponymous Gokomachi Building, namely Dolch, one of two French restaurants there. As I’m eyeing the street-side menu, I realize I visited this building about 15 years ago, in the company of Michael, senior editor of Deep Kyoto Walks. Along with the numerous legal offices typical for this part of town, there was a small bar tucked away in the back corner. I no longer remember the name, and find no hint in any of the signs hanging outside. The old place must have closed. [The bar was named Sons and closed a number of years ago, but the owner is now active as driver for Kyoto Conductor Tours! Ed.]

Michael was a regular of sorts, and he knew people by name. The owner even knew which vinyl LP to play for him. I think I was still commuting to Kyoto in those days, and envied him the feeling of being a local. Amid the conviviality, we pondered how places like this can exist, when they rarely draw more than a dozen or so patrons on an average night. It is a labor of love really, where the owner barely gets by, but pouring drinks and chatting with familiar faces is a better option than long hours stuck in an office somewhere. Plus, it makes for an excellent place to escape the rain.

Also by Edward J. Taylor:
* Walking through the history of Kyoto’s “Oil Alley”: Aburanokōji
* From Industry to History on Kyoto’s Muromachi-dōri
* A Stroll Along Teramachi: Kyoto’s “Temple Street”
* Tracking the Changes on Kyoto’s Bukkoji-dōri
* Shinmachi and the Giants of Gion Matsuri
* Ambling Down Kyoto’s Yanaginobanba Street
* Strolling in Kyoto: Takeyacho & Ebisucho
* Following the flow of the Takasegawa on Kiyamachi Street
* An In-between Day on Kyoto’s Ainomachi
* Miracle on Third Street: Walking Kyoto’s Sanjo Dori Part 1
* Miracle on Third Street: Walking Kyoto’s Sanjo Dori Part 2
* Looking for the Lost on Kyoto’s Higashi-no-toin
* From Bike Pound to Buddha on Rokkaku-dō Dōri
* A Detour Through the Quiet Life on Kuromon & Koromonodana Streets
* Finding Old Magic on Kyoto’s Tominokōji
* Walking into the Light on Manjuji-dōri