Andy Couzens will be providing video artwork for the “Voices for Umekoji” event this Friday. As a late addition to the program he didn’t get a mention on any of our promotional material, which seemed awfully unfair – so I decided to interview him and put him up here. Enjoy!

DK: From where do you hail?

AC: I’m from a place called Stanwell, which is next to Heathrow Airport. I lived a lot in South London.

DK: When and why did you come to Kyoto?

AC: I moved here in 2005 with my wife and son, we have since had a daughter. After living in London I needed to find a smaller city. Kyoto was always the likely candidate. If I get the urge for big, I can get it in 30 minutes.

DK: But what made you move all the way out to Kyoto (as opposed to say – Slough) when you already had a wife and child? Is your wife Japanese? Was there something about Japan specifically that pulled you out here?

AC: Yes, my wife is Japanese. I was impressed that Japanese kids could walk along the streets here, whereas in the UK we pretty much lock our kids up if someone as much blinks in a weird way. As for Slough, growing up 2 miles from Ali G country, I didn’t fancy going on a tour of British comedy haunts.

DK: What are your main artistic and creative pursuits?

AC: I have always enjoyed drawing and when I was about 9 a local artist took me under his wing and taught me the basics to oil painting. I have a love hate relationship with paint as a medium for myself. When I was studying art I fell for artists like Bill Viola, Gary Hill and Bruce Nauman. Sound and Video are perfect for me as I can use them to exploit my training in other mediums.

DK: What training have you had in other mediums?

AC: I studied drawing, painting and sculpture mainly. During my first few still life classes, the tutor asked us to only draw the negative space, which is the area around the objects you’re looking at, this had a profound effect on how I viewed the world. I like how when you look for negative space in your everyday environments the world is automatically converted into the series of abstract forms it actually is. We do it involuntarily all the time, when we zone out at work, on the train etc. Also, I worked at The End nightclub in London for over four very interesting years. It had one of the greatest sound systems in the world. I heard many of the so called superstar DJ’s, but I wasn’t so into the whole club scene. It was basically a beautiful sweaty circus. But the amazing experience of being exposed to such an overload of the senses 5 or 6 times a week pushed my ears and eyes towards that confused state that my work seems to now exist in. I want people to both zone in and zone out while they view it.

DK: Could you give me a brief history of Amalls no skcaj? 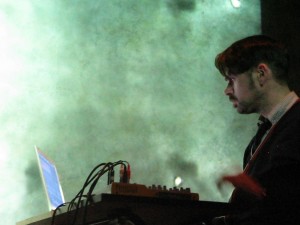 AC: Amallsのskcaj started as GG Jackson, it was a collective of three that only ever played twice. We formed as a tribute to Michael Jackson. Michael Migliacci left Japan last March, but Sean Roe and I decided to continue playing together and renamed ourselves Amallsのskcaj. We try only to draw from the MJ palate, so all sounds and about 90% of the video is sourced from Jackson. We have only ever played live, we have never rehearsed and we rarely discuss what we will play or do. It is a complete improvisation in sound. The video I make before, but I try to only use each video once. On the occasion that I can’t produce another I will make at least a small adjustment. We just decided that, as we began as GG Jackson which had a starting point of Billie Jean, we should just continue focusing on taking Michael Jackson and presenting him probably in a way that is maybe more representative of the madness of the King of Pop than anything you will find on his unmolested treatments – ahem! I mean recordings. My own wish is to be invited to play at an official MJ convention. I attended one once at Hammersmith Palais, but that’s another story.

DK: How do you like the arts scene here?

AC: I love it! It’s such a welcoming and nurturing environment. People generally come to events with an open mind and leave with it opened further. There are always some very interesting one-off collaborations. Urbanguild is of course an intergral part of it all. The fifth Beatle as it were.

DK: How has your creative work changed or developed since coming to Japan?

AC: I had always dabbled here and there, but meeting Michael Migliacci and the friendship that blossomed from that meeting actually focused me on pulling my finger out. I owe him a lot, but he owes me money.

DK: Really? Have you done any work with dolphins?

AC: I have neither worked with nor had anything akin to a relationship with a dolphin beyond crying during that- movie-about-dolphins-that-I-can’t-for-the-life-of-me-remember-the-name-of-right-now. I have to admit that I am more than a little confused as to the thinking behind placing dolphins in a watery prison in the landlocked city of Kyoto!

As are we all, Andy! Come see Andy’s video artwork at “Voices for Umekoji” at Urbanguild this Friday! For advance tickets (1500 yen – includes one free drink) click the ATTENDING or MAYBE ATTENDING on the Facebook event page OR buy your tickets at Tadg’s Irish Bar and Urbanguild.