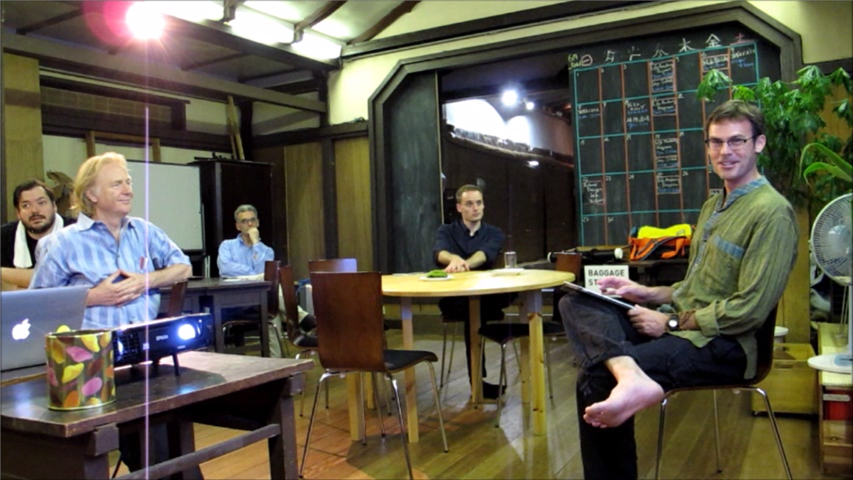 On Wednesday evening we held our second Kyoto Bloggers meeting at the very excellent Impact HUB. I will write more about the event and about Impact HUB itself later, but today I want to share with you a short video of Ted Taylor reading from our ebook, Deep Kyoto: Walks. Ted gives a brief explanation of how and why he wrote the piece and then a reading from the piece itself. I have posted the text of the excerpt below.

Across Purple Fields
by Ted Taylor

Few embody living with spirit like toddlers. They make their way through the world tentatively, each day bringing with it new experience and wonder. Every endeavor is full, unselfconscious, perfect. Watching my daughter as we get ready to go out, I once again feel more than a little envious of this.

It helps me realize that I’ve been approaching Kyoto from the wrong perspective. When I first moved here, after twelve years in a small rural Japan Sea-coast city, I found Kyoto crowded, busy and filled with noise, a judgment made as I raced on my bicycle from one entertaining distraction to another. Yet recently, slowing down, I have begun to find the spaces in between. For as the Buddhists teach, it is in those spaces that satori lives, just as it does in the spaces between the breaths.

Perhaps I place too much emphasis on the subject, but it strikes me how little I hear Zen discussed today, in relation to this city in which it flourished. When I came to Japan twenty years ago, it was hard to separate the two, for it was an interest in Zen and meditation that brought me here in the first place. Yet after a number of years of sitting and practicing some of its related art forms, it began to dawn on me that Zen was less about the materialistic packaging of “culture,” and could instead be found in any act to which one brings complete awareness. And for my daughter, every act is performed in such a state. There is profundity in her putting on her jacket.

The margins of her world are limitless, an idea reflected in her name, Sora, which means ‘sky’ (a nod to New Mexico, the place of her birth), but also can be read as ‘emptiness,’ in the Buddhist sense. Sora’s world is measured not with the mathematical precision of adults, but measured by whatever she is engaged in. And like all adults, I’m afraid I’m guilty of often wanting to escape the oft-unpleasant immediate, and move instead toward pleasurable yet contrived diversions.

Sora is already standing in the entrance, shoes on, ready to make an escape of her own. And this house is conveniently located as if with the idea of escaping in mind. A seven minute walk to the east and I’m on a subway, moving south toward other train lines that take me to my beloved outdoors. I can claim that the walks to be had there are filled with spirit, but more often than not, I look at these as a respite from the mad pace of the city.

An escape indoors is also close by. A seven minute walk to the west brings me to a Zen temple that offers meditation nearly every morning, and on many a morning I can be found atop one of the round cushions placed at odds to the room’s squared corners. A poet who greatly inspires me used to meditate here a number of decades ago. I like to think that he and I have collaborated on the sheen of the temple floor, brought to a high polish by the focused sliding of feet in walking meditation.

These days, I find more meditation in my walks with Sora. I follow her lead, being ever the student. Unlike the timed sessions at the temple, our walks are timeless. It is impossible to predict how long they will take, or what the world will offer up. But always, the route is the same. Two blocks over, one block up…

…I step from my front door and look immediately upward. Living as I do in a traditional machiya, the view of the sky is limited to a single window, and I actually have to go outdoors to see what the weather is doing. Often I’ll have some idea due to the weather within the house. Property tax in Kyoto was once measured in the width of a structure, so machiya were built long and thin and are affectionately referred to as ‘eel’s dens.’ My own house is six small rooms lain end to end, the windowless inner rooms holding the winter’s cold a little too effectively. Now, as I look upward, I think yet again that the one thing I most dislike about Kyoto is that even out on the streets you can’t really see the sky. The roads are narrow, above which tall buildings are bound by a tangle of power lines. So it is a good thing that Kyoto has plenty at ground level to delight the eyes.

Based in Kyoto, Ted’s work has appeared in The Japan Times, Kyoto Journal, Resurgence, Outdoor Japan, Kansai Time Out, Elephant Journal, and Skyward: JAL’s Inflight Magazine, as well as in various print and online publications. A Contributing Editor at Kyoto Journal, he won the top prize in the Kyoto International Cultural Association Essay Contest. He is currently at work on a series of books about walking Japan’s ancient highways. Ted blogs at www.notesfromthenog.blogspot.jp.