This month Edward J. Taylor continues his ongoing exploration of Deep Kyoto’s streets (and takes me along with him) for a stroll along Yanaginobanba Street. 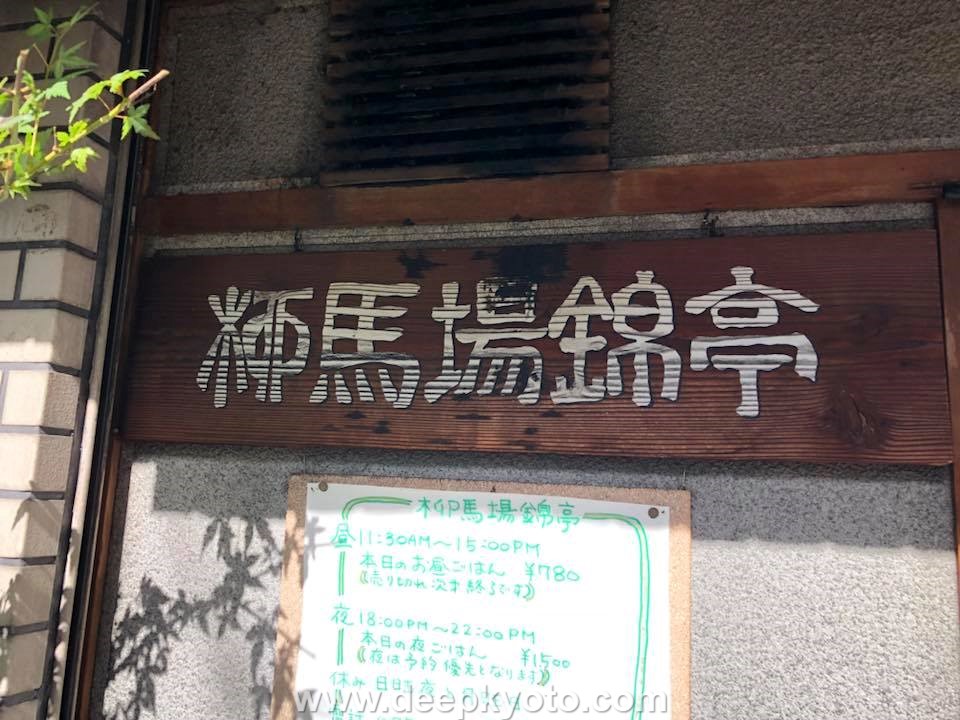 I’d originally planned to follow up my previous piece with another one related to the Gion festival, but the idea grew less interesting the more I thought about it. Not only would it be boring to read, it would be even more boring to walk. Maybe this lack of enthusiasm was due to the heat, as Japan was suffering through a record-breaking heat wave, a seemingly unending series of 37-degree days.

Yanaginobanba seemed a better choice. While not really packed with old landmarks or famous sites, it had a name that always brought to mind Richie Valens’ best-known tune. Or at least to my mind, and to that of a friend who had lived for years on the street, Michael, the Chief Editor of Deep Kyoto Walks.

It seemed appropriate to ask Michael to join me on the walk. Keeping mindful of ones surroundings in order to write about them is always more challenging with a companion, as the conversation inevitably drifts to topics far and wide. I thought it a good idea to sit a while in a café first and get a lot of the catching up done, then move along in pursuit of the interesting.

I met Michael at Yanaginobanba’s northern terminus with Marutamachi. The high heat had persuaded him to wrap a white towel around his head. The only thing missing was a pair of those flared Aladdin trousers favored by workmen who navigate constructions sites. The initial couple of blocks led us past the County Courthouse on our left, with every old house on the right hung with a sign for judicial scriveners. 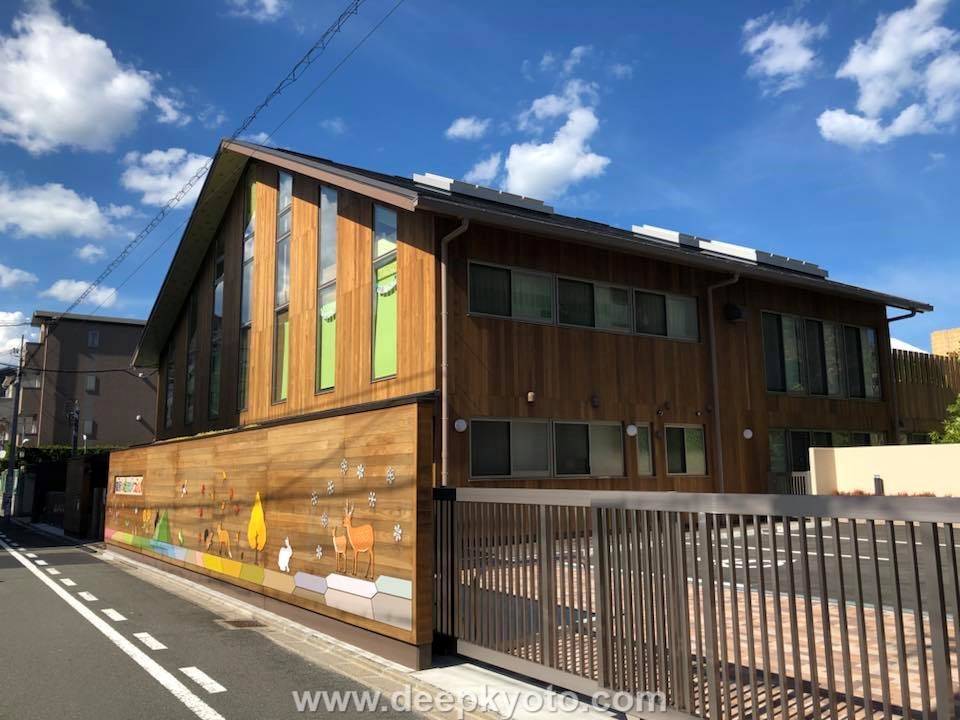 Next up was an adjacent schoolyard that no doubt serves as the site of justice of another kind. I remember reading once that American pre-school teachers will immediately break up a fight over a toy, while their Japanese counterparts will hold back awhile to see if the kids can work it out for themselves. Little wonder, I though at the time, that the US has such a litigious society, so used they are to a mediary getting involved. 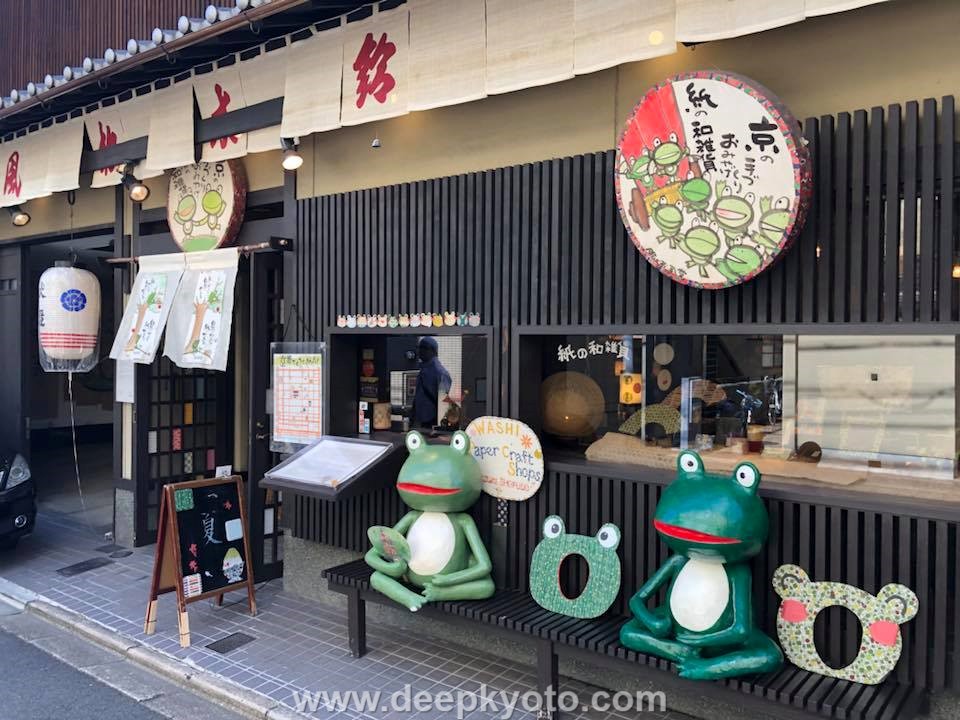 One judgment I came to on my own was a strong liking for Thai restaurant Bangkok Garden, just across the street from the school grounds. I remember having an excellent meal there one night, then had lost the location for the next dozen years. Oddly enough, Michael too had a similar story.

But our next meal we’d share together, at the Café Montage, whose name also rings in a song from a film. One of its lyrics says that “To show it all would take too long,” which was equally true of the processing of our coffee. Traditional cafes in Japan tend to take great care over the brewing of their drip coffee, which is best sipped and savored with a book and an empty afternoon. Café Montage also takes great care in their music, hosting live events, and decorating one wall with a large selection of classic music records. As we caught up over the next hour (versus an intended twenty minutes), Brahms became a welcome third-party.

Immediately after stepping outdoors into the heat, perspiration returned to our brows, now just a little bit higher. I recall making some kind of John Stuart Mill reference in front of the Mills antique shop across the street, and later Michael and I both professed our liking for the literary Café Bibliotic Hello! around the corner of Nijo. 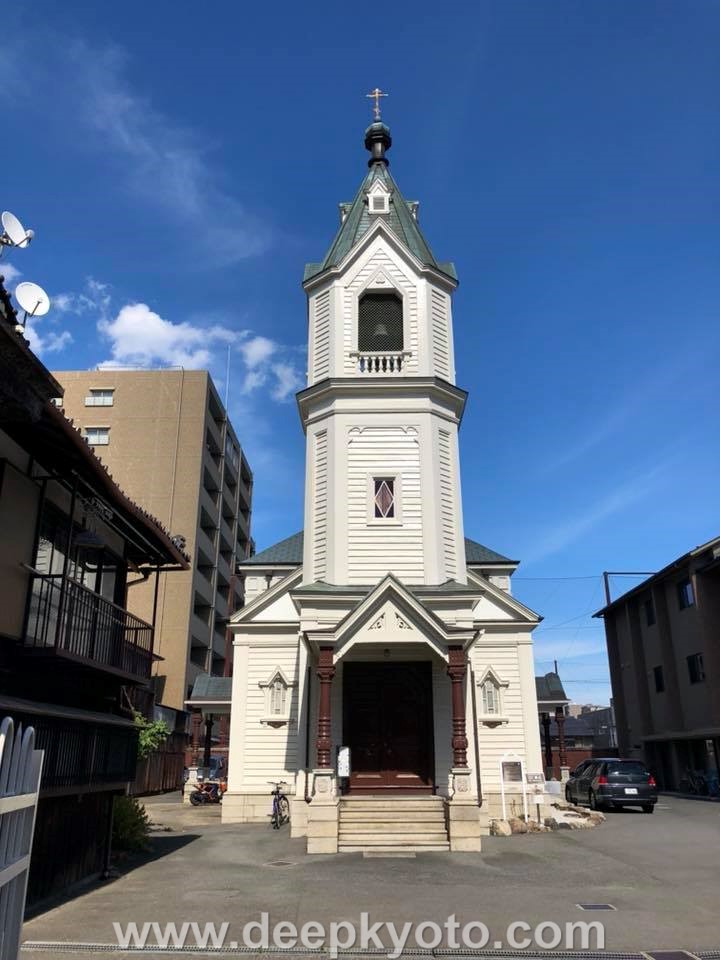 Just behind the café stood the Kyoto Hallast Orthodox Church. Built in 1903, not long before the Russo-Japanese War, the church later helped ease the suffering of Russian POWs held in Kyoto. An ironic though not unsurprising location. This block was once fraught with brothels, rebuilt in an easy-to-supervise location after the area was devastated during the 15th century Onin Wars. Brothel areas were often accompanied by willow trees, and the world of the courtesan was traditionally known as karyūkai, or the “flower and willow world.” The shade of these trees made for a pleasant place to ride horses in the adjacent riding grounds, leading eventually to the origins of this street’s name, Yanaginobanba. 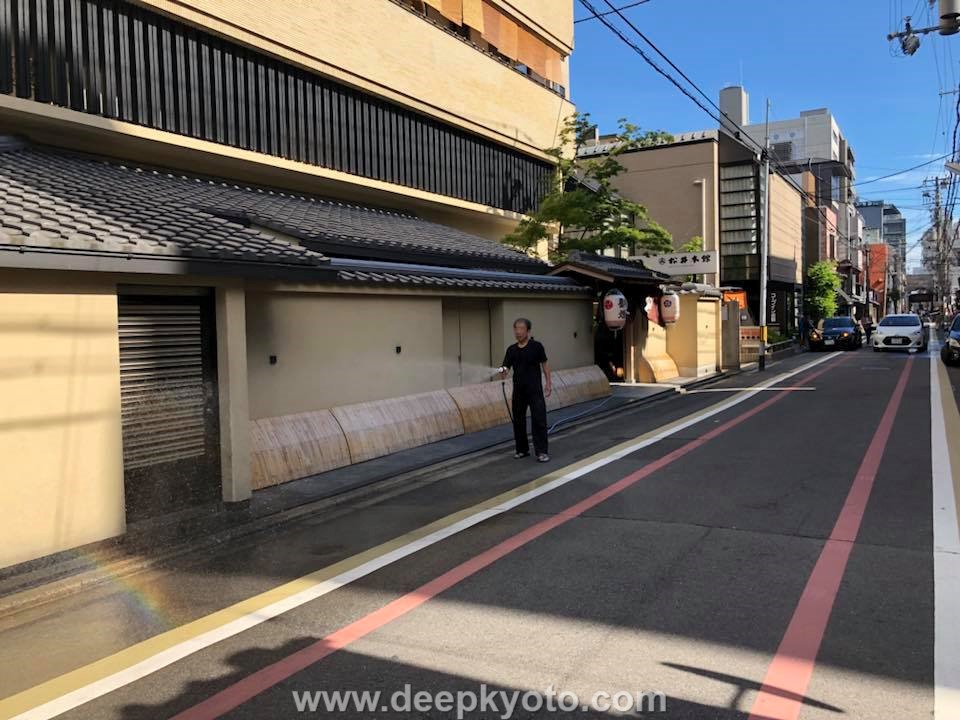 Opting instead for shanks’ mare, I was for the first time doing one of these strolls walking south. I noted the usual neighborhood patterns I’ve mentioned in earlier columns, though today they appeared in reverse. This first residential stretch grew more and more posh as we neared Oike-dori, including two remarkably large and attractive pre-schools, one of which was like a massive wooden cabin. (Perhaps some of their mothers belong to the Soroptimist International club next door.) Nearly hidden amongst the stained glass at the intersection was a placard for a type of cherry tree that blooms even in winter; a fine metaphor for the continued growth of a child. 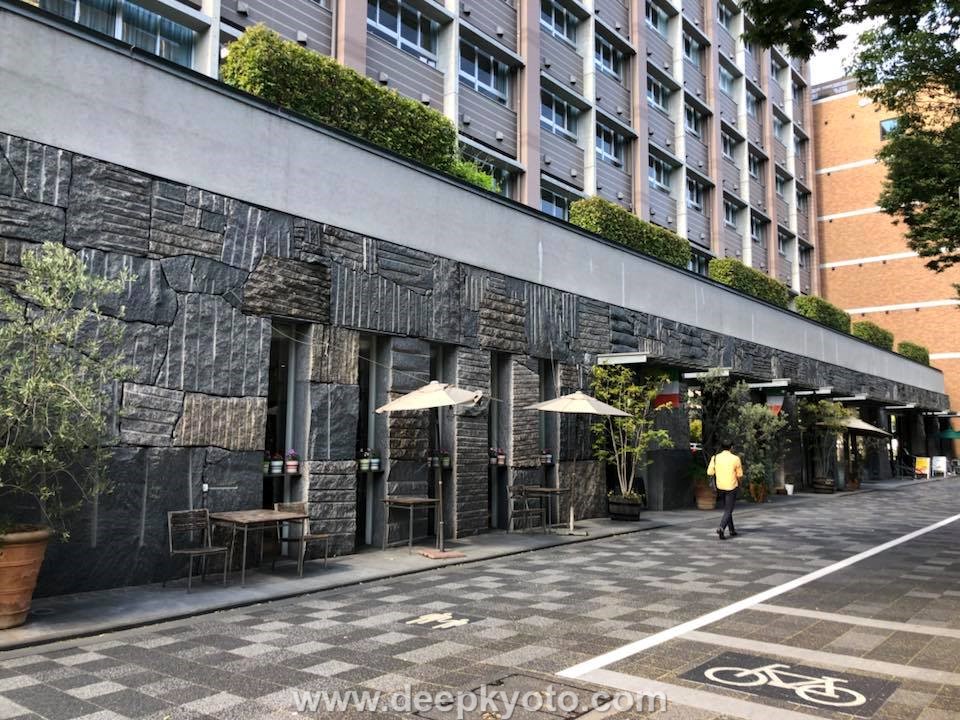 From Oike all the way to Shijō was a near unbroken chain of trendy eateries, so many that the names and cuisines must change every year or so. At the time of writing, Spanish food seems to be pretty popular, though French continues to reign supreme, as it has for decades. Café Quarirenge was another attractive little café down a little alley to the right, whose rustic structure would be pretty cozy on a winter’s day. 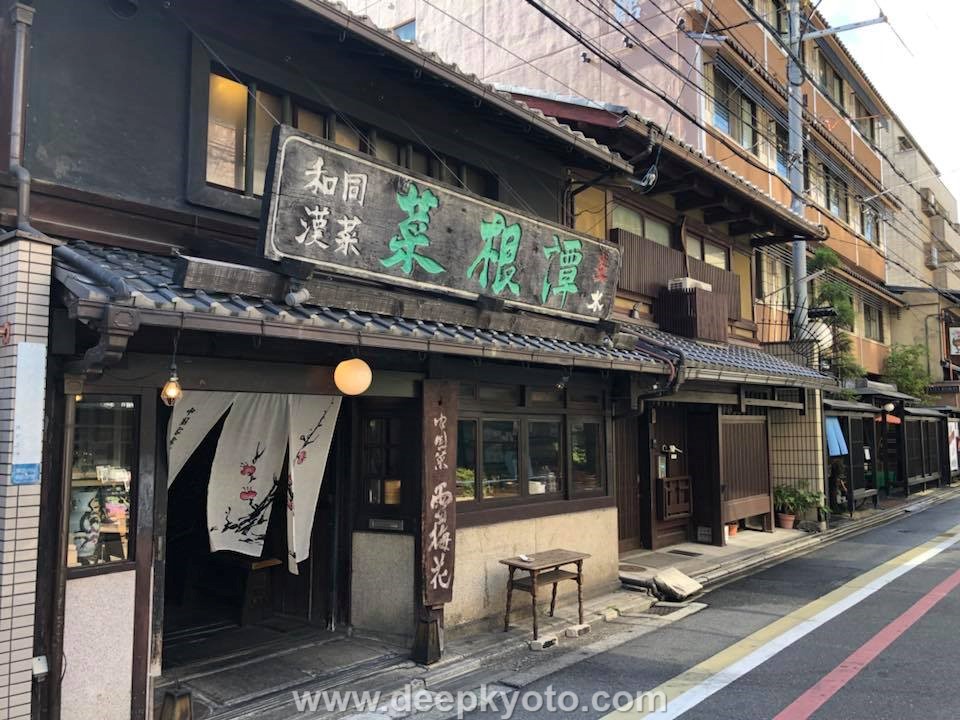 Oddly enough, it had taken us half the walk to find something authentically Japanese. There was a cluster of old buildings just above Sanjō, with an unagi shop, another selling antique kimono, and a third serving seafood from Nagasaki’s Gōtō chain of islands, long a stronghold of hidden Christians. This last restaurant most likely was connected with the next-door Christian classroom, though its name “Mustard Seed” brought to mind a well-known Buddhist parable, one emphasizing the impermanence that even the most trendy eatery must one day face.

The intersection with Sanjō was easy to spot due to the fine stonework of its Taisho era structures. The century-old Nippon Life Insurance building is now a tangible cultural heritage building, and the adjacent YMCA from the same year bears a little known plaque mentioning that it was here that Japanese basketball was born, the league taking on a decade later the catchy name of the “Kyoto Hot Ball Association.” 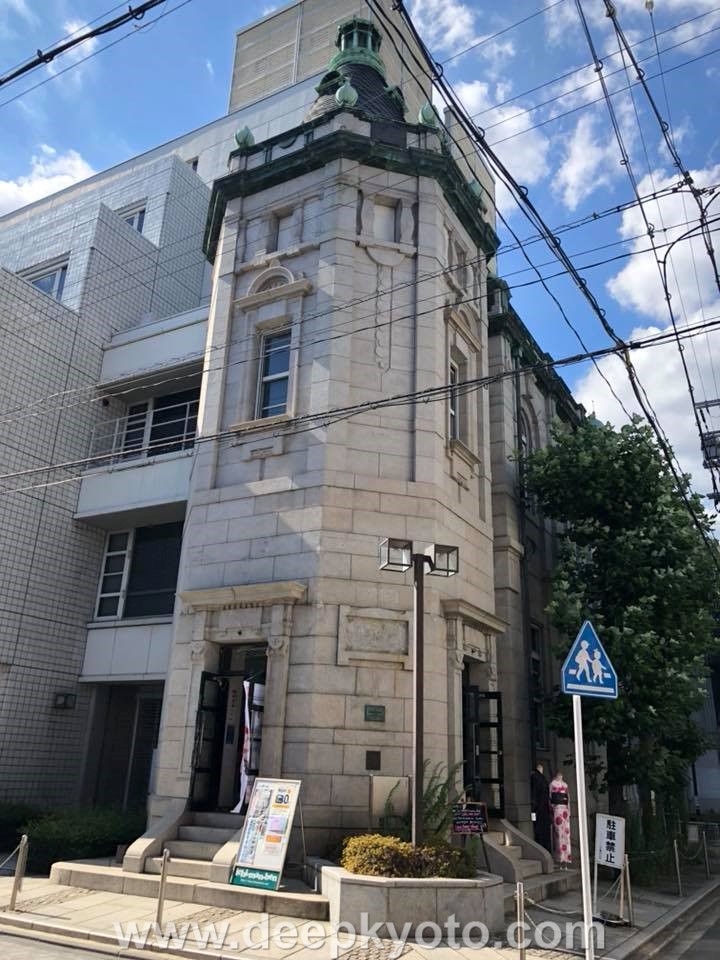 The theme of tradition continues toward Shijō, both in the form of actual old shops, or in nouveau guesthouses built in a traditional look. We pass the birthplace of the wife of legendary hero Sakamoto Ryoma, then Nishiki market, then the well-loved live house, Kyoto Muse.

The plethora of restaurants and cafes is making me think how livable this section is, and the residents of the luxury flats that have colonized the area south of Shijō would of course agree. Michael lived down here, though in a flat of an older vintage. As true history has been somewhat lacking on today’s walk, I happily let him focus on his own. He mentions the shop “77” and its chocolate and beer, which was a good spot to get a warming cup of cocoa after a round of Christmas shopping. A Thai place now stands on what was once the best pizza joint in town. A gallery called Otera House always intrigued him, but was never open, and the beautiful house on the corner with its lovingly tended vertical garden is now a tiny carpark. Similarly, the trees in the park near Yanaginobanba’s southern terminus have been removed, yet a handful of kids brave the heat to run its now desertified grounds.

We reach that terminus at the busy Gōjō. Despite a sluggish pace due to the high humidity, the walk itself had gone pretty quickly. But nowhere as quickly as the rate of change in even this, the most traditional of Japan’s cities. Yet although Tokyo gets the press for being high-paced and ultramodern, real change in Japanese society has always originated in Kyoto, which continues to move headlong into some sort of future, at the pace of a horse perhaps not in full gallop, but in more of a dignified trot. 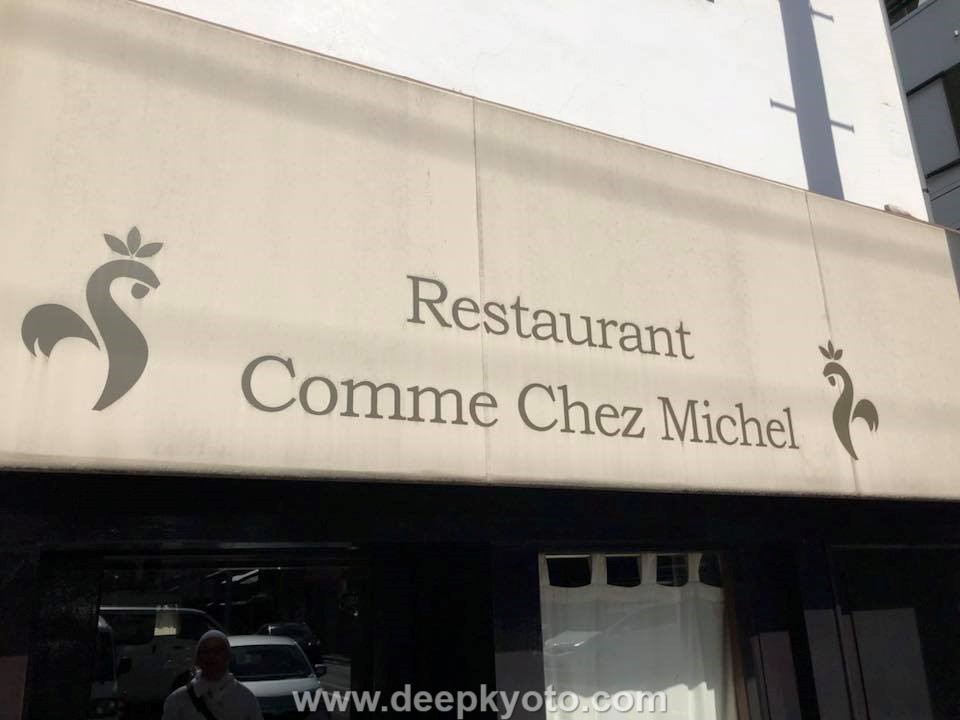 Also by Edward J. Taylor:
Walking through the history of Kyoto’s “Oil Alley”: Aburanokōji
From Industry to History on Kyoto’s Muromachi-dōri
A Stroll Along Teramachi: Kyoto’s “Temple Street”
Tracking the Changes on Kyoto’s Bukkoji-dōri
Shinmachi and the Giants of Gion Matsuri