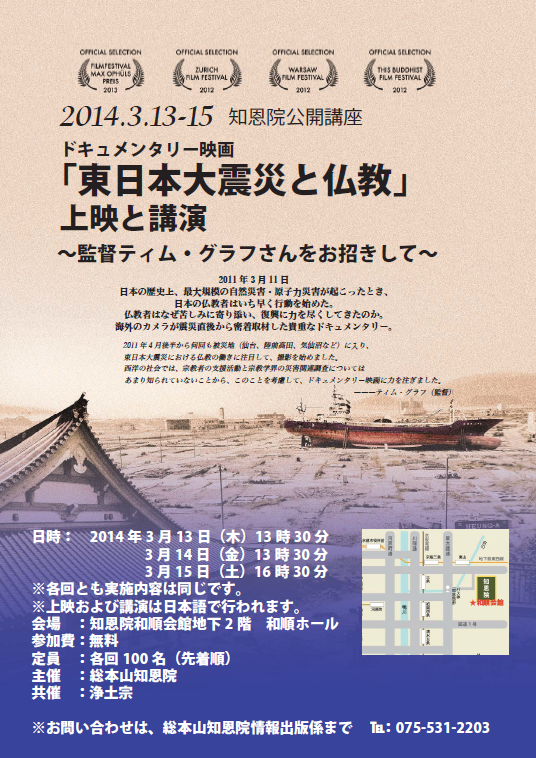 From Souls of Zen via Jean Downey:

“We are delighted to announce that Chion-in, the head temple of Jodo (Pure Land) Buddhism in Japan will show Buddhism after the Tsunami this March in Kyoto!”

From Ten Thousand Things: Souls of Zen – Buddhism, Ancestors, and the 2011 Tsunami in Japan follows the “greatest religious mobilization in Japan´s postwar history.” Filmed from March to December 2011, the documentary by Tim Graf, a graduate student at Tohoku University, and director/cinematographer Jakob Montrasio  explored  the everyday lives of Buddhist professionals in the disaster zone, and Japan’s tradition of ancestor veneration in the wake of 3/11, focusing on Soto Zen and Jodo Pure Land Buddhism.

Chion-in Wajun Kaikan, B2 Floor, Wajun Hall
Free and open to the public!
Details in Japanese at the LINK

Buddhism after the Tsunami – The Souls of Zen 3/11 Japan Special (Classroom Edition) – Trailer from Tim Graf on Vimeo.