My word! I think I have to see this! 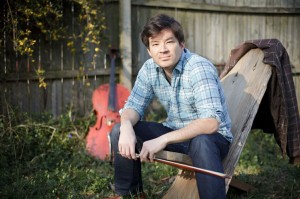 Nick Takénobu Ogawa, an Atlanta-based and nationally renowned cellist and composer, is a classically trained artist that has created his own style of music for the cello. He incorporates bluegrass, blues, and other non-traditional sounds that exemplify ways of using the rich sound and dynamic range of the cello to make new, interesting, and beautiful music. While living in Kyoto, Japan, Nick taught himself to sing and play at the same time, and began seriously writing music. He has lived and performed in New York, Philadelphia, Vancouver BC, and is now a regular in the Atlanta music scene. Nick performs using his middle name, Takénobu, which means “Iron-Will” in Japanese. Takénobu is a traditional Japanese name that comes from the combination of the Kanji in his father’s and grandfather’s first names.

Takénobu will be performing in Kyoto Japan on May 22nd at Ooh La La, May 25th at the FLAME at Papa Jon’s Eatery, and May 28th at the Kyoto Muse.  To listen to Takénobu’s unique sound, please visit listen.takenobumusic.com