It’s almost a year ago now that I interviewed Roger Walch and Ted Taylor during the making of the movie “Children of Water”. Regular readers may remember a wide-ranging discussion about story-telling, old movies, jizo statues, and very, very creepy kokeshi dolls. The movie will have its premiere showing in Nara on July 19th. See the details on the poster below: 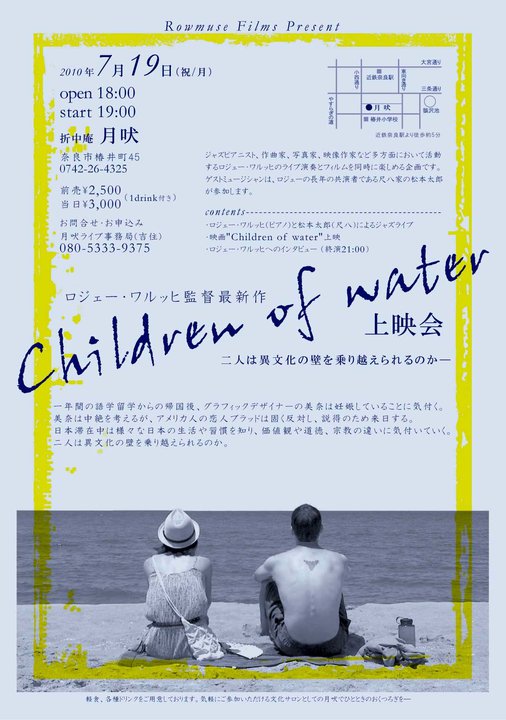 Actually Roger likes to call this its “pre-premiere” as he will have a bigger premiere in Kyoto in the autumn. Says Roger:

Synopsis:
After one year in an ESL-course in the US, Mina (a Japanese graphic designer) returns to Kyoto and discovers that she is pregnant. She contemplates abortion, but her American boyfriend Brad strongly opposes and flies to Japan to convince her to keep the baby. During his stay he not only gets to know life and customs in Japan but also different moral and religious values.

There will be a shakuhachi/piano performance before the screening.

The location in Nara is a Restaurant called “Geppo”. It is 5 minutes on foot from Kintetsu Nara station. One block south of Sanjo-dori and a bit East of Konishi-dori.

Related: The Children of Water interview