An Interview with film-makers Roger Walch and Ted Taylor

I love film-making… I love to think of stories, to make a film, to edit a film, to put the sound track together… And as soon as I’m finshed with a film. I want to do the next one…
(Roger Walch)

Last week Ted Taylor invited me to dinner with the makers of the movie “Tengu” in the izakaya “Tengu” (do you see what they did there?). I spoke to Ted and to the director Roger Walch about their new film project: “Children of Water”. They had just completed a long day location shooting at Itami airport, the Kamo river, Yoshida yama, and in front of Tengu. Though tired, over a bite to eat and a few beers they waxed enthusiastic about their new movie. Roger explains the plot as follows:

After one year in an ESL-course in the US a Japanese graphic designer returns to Japan and discovers that she is pregnant. She contemplates abortion, but her American boyfriend strongly opposes and flies to Japan to convince her to keep the baby. During his stay he not only gets to know life and customs in Japan but also different moral and religious values. 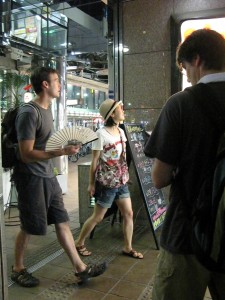 Ted: It’s a cross-cultural thing. He’s trying to come back and save the relationship and he wants to have the kid, but she thinks he comes to support her. She thinks he’s coming to be kind like “oh I’m gonna come with you and be at your side while you have it”. You know. Whereas, he’s coming to prevent her from having it and convince her to come back to the US, she’s more businesslike about it,
Michael: She’s already decided?
Ted: She’s more black and white about it, right. And he’s more like no, no, no! He’s there to keep the relationship alive and she’s just dealing with the baby situation so again they’re not communicating. Roger was saying first he was just gonna do rooms and shooting in rooms, but now he wants to shoot a couple of days around Kyoto because he said, well you know we should show some Kyoto… He is using this as a platform to show more about Japanese culture – so things related to children and the death of children like jizo [see note at end of article] and kokeshi…
Michael: Kokeshi?
Ted: Kokeshi is like – you know those kokeshi dolls.
Michael: Yeah. How do they relate to that?
Ted: Um, in particular up in Tohoku, in the old days when farm families didn’t have enough, they would have an unwanted child, and they couldn’t feed it and they would basically starve it to death or kill it. They would get a kokeshi doll that would basically be a representation like the spirit of the kokeshi doll is actually in…
Michael: That’s where kokeshi dolls come from? That’s horrific! I thought they were just like cute little dolls.
Ted: Yeah. Exactly and that’s the reaction I think. And that’s why… the Tohoku region is basically putting the kabash on that, they are really keeping that fact underground now because kokeshi dolls are considered a folk art for that region. A lot of tourism is based on people buying that as omiyage. So were people to know these represent the spirit of a child, people would not be buying these things… “Ko” [子] is child and “keshi”is like kesu [消す].
Roger: Kesu. Like “erase a child”.
Michael: It gets creepier every time you talk about it!
Roger: You can hardly find any reference to it on the internet because in northern Japan they are now –
Michael: How did you find out about it?
Roger: It’s just logic. You look at the name. The Japanese characters.
Michael: But to find out that that’s what it was for you must have done some research.
Roger: Some Japanese told me and … it’s like the ubasuteyamas [姥捨], you know. Where you throw away your grandmother in the mountains…
Michael: There was a short story…
Roger: Yeah, Narayama Bushiko “The Ballad of Narayama”.
Ted: It’s a brilliant film. Have you seen it? I’ll give you a copy…
Roger: There’s two films, a black and white film and the remake by Imamura Shohei in 1983. And that’s a very good movie. I think it’s one of my favorite movies. It’s about when the old men, old women reach the age of 70 they have to make space for the young generation.
Ted: Like Logan’s Run?
Michael: I was just about to say that! (laughs)
Roger: Kokeshi is a little bit like this ubasuteyama. You know in Japan, until 100 years ago to kill your own child was not a big deal or a big sin. It’s just if you couldn’t feed them… The same happened in Europe.
Michael: There was a lot of rural poverty wasn’t there?
Roger: Yeah poverty and especially in the countryside, if you live in a valley and in long winters… so that’s one explanation of the kokeshi. Of course the officials of Yamagata and Akita will not admit it. Kokeshi are a big export. …A good friend of mine, a French guy who lived in Kyoto, his name is Eric Faure and he wrote three books on Japanese cults and demons and spirits so he’s an absolute specialist on Japanese ghosts and demons and myths and legends and everything and I talked to him about kokeshi too. I brought up the topic and I said I need a kokeshi doll as a prop for my movie and he said never ever get a kokeshi doll at an antique store, he really urged me never ever get a kokeshi doll at an antique store, never ever get a second hand kokeshi doll because it could be possessed by the soul of a child.
Ted: If they were new they would be fine because they are technically pure but if you were to buy them at an antique shop you are technically buying a fetish item that has the spirit of a child in it.
Michael: Eek!
Ted: Yeah. It’s like Chucky yeah.
Roger: There is a famous temple in Kyoto, not far from Horikawa/Imadegawa and it’s the doll’s temple. It’s where you bring your possessed doll! It’s a little bit north-east of Imadegawa/Horikawa. The temple is run by nuns, and there are dolls with growing hair… behaving strangely . If you have a doll that is possessed they do the exorcism and they destroy it for you.
Ted: So we’re using the film as a springboard for that, this fantastic, supernatural element of Japan, but it’s not so overt like the whole Tengu naked kitsune thing. It’s more like this is just part of the culture…

[Roger and Ted co-wrote the script for “Children of Water”. I asked Roger about the script writing process…]

Roger: I outlined the script and I wrote some basic dialogues, or my ideas for dialogues… he [Ted] kind of works them out and puts them in his words… a little bit more eloquently than my English. Basically I laid down the story…
Ted: I do have to say, if you’ll allow me to be immodest for a minute, I tried to write an emotionally powerful scene without having a whole lot of faith in it. But then when we acted it, it was quite powerful. I got kind of emotional and there was a great sense of anger in both of us… I could feel it building in me as we were acting so that was really cool. I mean again you know I’m not an actor, I don’t know what to do as an actor but to be able to create an emotion out of nothing, for the first time to ever do that, it was like wow – we actually acted. She and I, neither of us are pros but it was like wow we actually created emotion. And Roger said he was watching the dailies that night and he said yeah it was really good. The words were good. The way we conveyed the words were good. So I was really happy. And I told Roger that. My words are my strength not my acting. I have more faith in what I write. That’s why I’m happy to write. Because when we are saying the words later, when we are filming it I can feel more confident in what I’m doing when I try to convey these words.
Michael: So when will the film be finished and ready to show?
Roger: That’s a good question. A very good question. We will have to finish shooting with Ted by the 4th of August because we leave for Switzerland on the 5th. And then Ted will be gone. You know he leaves in September. So in September we will do some location shots or just her alone. I’ll do some things in September. Then editing and everything, post production, probably end of the year, beginning of next year.
Michael: And distribution?
Roger: Yeah! Always the question. Showings are still undiscussed. (laughs)
“Tengu”, is generating some interest… we show it here and there. I had screenings in Tokyo and Nagoya and I’ll show it in Switzerland in August, and…
Ted: Bringing it to New Mexico next year…
Roger: Yeah right, and I’ll show it in Tokyo again in October and December… I’ll send it to festivals and everything but there is no distributor. …It’s a short film and it’s a very current theme so it’s easy to send to short film festivals. The problem is I love film-making but I’m not a business man, I love to think of stories, to make a film, to edit a film, to put the sound track together…
Michael: But actually selling it is a weak point?
Roger: Yeah, totally, totally, totally. I’m totally not interested in that at all. So what I need is a producer..
Michael: A Brian Epstein?
Ted: Yes, yes yes. A Colonel Parker.
Roger: And as soon as I’m finished with a film. I want to do the next one. I don’t want to sit back for two years sending it to all the festivals – it bores me to death!

Note: Jizo or Ojizosama is a kind of  Buddhist saint, considered to be the patron of children, particularly those who die young. His statue can be seen everywhere in Japan, by the roadside, in temples, shrines, up a mountain or in a forest. Often he is dressed in a red bib or decorated with childrens’ toys to make his appearance less fearsome to the spirits of the children he will guide into the afterlife. More recently in Japan he has been worshipped as the guardian of the souls of stillborn, miscarried or aborted fetuses. These are known as 水子 “mizuko” or “children of water“.

You can see trailers for Roger’s previous body of filmwork on his website here: rowmusefilms.com. Roger is also an accomplished musician. He writes his own soundtrack music and performs regularly as a pianist with a shakuhachi player, percussionist and trombone player. You can see some of his musical work here: shakuhachipiano.