One Night of Musical Protest Against the Kyoto Aquarium

Kyoto’s Mayor Kadokawa has given Orix Corporation the go-ahead to build a massive aquarium/dolphinarium on Umekoji Koen, a public park. On Friday January 21st The Commitee to Protect Kyoto (京都を守る会) will be hosting an awareness raising musical event at Urbanguild to let people know what they can do to protest against this ridiculous decision. We have a fantastic and eclectic line-up of traditional, folk, rock and pop musicians! You really don’t want to miss this wonderful show! 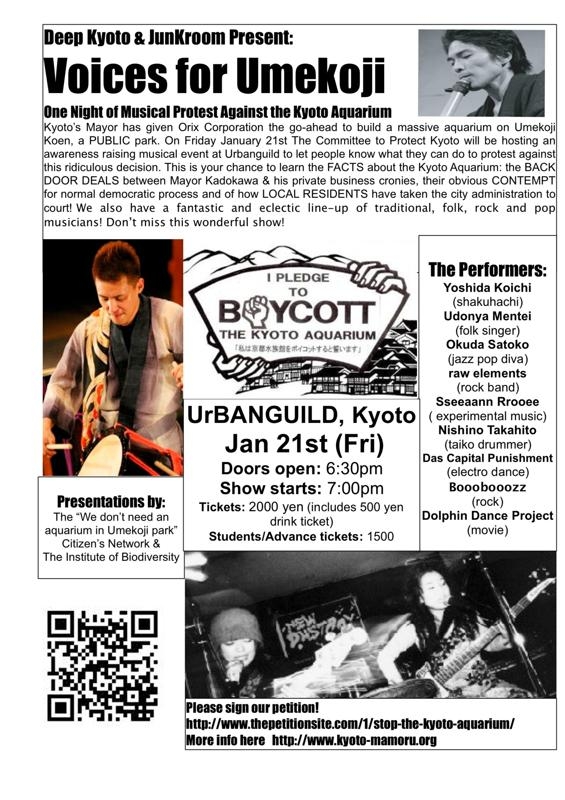 A brief synopsis of our position:

Besides issues such as the cruelty of keeping dolphins in confined conditions, the 5,400 tons of carbon dioxide that the building will exude per year into the atmosphere, and the lack of vision in developing this city with its unique position in Japanese history and culture, there is the issue of public accountability. Umekoji park is very popular with the local people but the aquarium that will be built on it is not. The plan for the aquarium was made behind closed doors between the city administration and private business with very little public input and despite strong public protest. There is something inherently wrong with a system that allows the city mayor to arbitrarily dispose of public land in this fashion.

Now, there are those who say, “Look they’re already building this aquarium. You can’t stop it now. Isn’t it a done deal?” Well, no doubt we can’t stop the Kyoto Aquarium being built. But we have to try. This beautiful city of Kyoto, is considered the “heart of Japan”. How can we not fight for it? And if we can focus enough national and international media attention upon this, perhaps the city administration will be more careful about making this kind of decision again.

+Presentations by:
The “We don’t need an aquarium in Umekoji park” Citizen’s Network/「梅小路公園に水族館はいらない」市民ネットワーク
The Institute of Biodiversity/いきもの多様性研究所

Location: To find Urbanguild, from Sanjo Dori go down Kiyamachi Dori (this is the narrow street running alongside Takase stream) Urbanguild is on the east side (left hand side as you walk down from Sanjo) after approximately 150 metres. It’s on the 3rd floor of New Kyoto Building – access by elevator or stairs. Here’s a map.
Tel: 075-212-1125

For more background information in English: