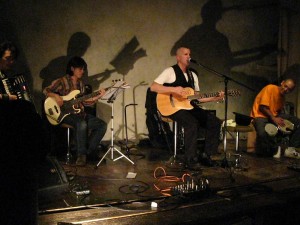 I’ve been getting news from various quarters of a charity gig on November 13th featuring several local musicians including our old favorites raw elements. As it happens on Tuesday evening I went to see raw elements play a wee gig at my favorite live house Urbanguild. There’s a video of their performance at the end of this post to whet your appetite but first the good word from Jennifer L. Teeter:

Keep your calendars open for “Get on the Mat!” a charity concert for Nepalese Orphans to take place in Kyoto on Saturday, November 13 at Honen-in Temple.

Performances include shakuhachi/calimba player Robbin Lloyd , +RAW- elements featuring Max and yun-han and Shohei Kuratsu on sax (click here to listen to one of their collaborations), and accordion/trumpet duo Garage.

This is one of several annual events to raise money for the Laliguras Children’s Home in Kathmandu, including a concert and a charity walk (organized by Kevin Ramsden). 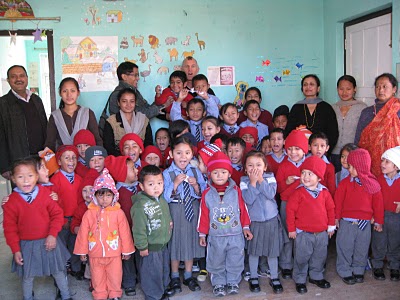 According to event organizer and +RAW- elements member Max Dodds:

‘Get On The Mat!’ is part of a series Kevin started years ago and has included Get On the Desk/Bus/etc., which refers to the goal of the charity event at the time. The children consist of five boys and five girls, most of whom are orphans and had nowhere to go. We provide all of their expenses: food, clothing, health, education and shelter. Part of the proceeds will also go into a fund we are starting to build a school in Kathmandu. This is a long term goal; however, we are committed to meeting the needs of ten kids at a time until we can expand. We also have ten sponsor families in Kyoto who pay for roughly half the costs. Occasionally when they need something else, we arrange to buy it with any funds we have left over from the charity events. These have included a generator, a mini library, medical expenses, and soon a laptop. The goal [of the event] hasn’t changed this time, so we are going to get on the tatami mats at Honen-in.

When asked about what prompted him to start organizing these events for the Nepali orphanage, Max responded:

Initially I was doing gigs and donating proceeds to charity when Kevin approached me about organizing music for his events. It has led to our collaboration in the laliguras project. (‘Laliguras’ refers to a Nepalese flower.)

Max also explained how his relationship with the Nepalese orphanage began:

I have visited the orphanage once so far (Kevin has twice). I met the director in Kyoto some years back and made a connection with him. I started sending books and school supplies at first and later generated a little money from small charity events. Kevin expanded everything by asking friends to sponsor a child and the orphanage grew from there. 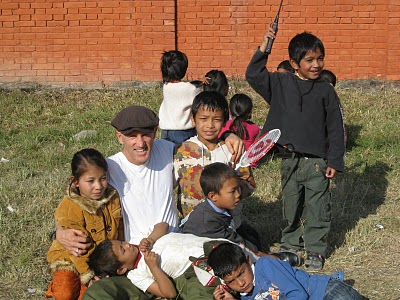 I made an instant connection when I met the children. Even though we cannot communicate linguistically, we played in a park for a few hours one day, running races, arm wrestling, playing badminton with ancient racquets, singing and laughing, and I look forward to seeing them again, hopefully next year.

Other than live music, baskets from Zimbabwe will be sold to help fund the Zienzele AIDS children organization. Items will also be sold to support a Guatemalan women’s empowerment NPO.

The entrance fee is only 2000yen – a small price to pay to bring smiles to the faces of the children of Nepal. Hope to see everyone there!

Thanks Jen! Here are some more details from Kevin Ramsden:

There will be three sets of live music (the mellow variety) in the main hall, as well as momiji (hopefully) and some items for sale for various charities. Doors open at 18.00 and music starts at 18.30. Honen-in do not allow food or drink to be consumed on the premises, so please think about eating early or late. All are welcome, so bring the family. The donation for the evening will be 2,000 yen per person (high school age students and above only need to pay – little kids free, but mum and dad can chip in a little bit more if they feel generous).

To find Hone-In go south from Ginkakuji along Tetsugaku-no-michi (The Path of Philosophy) and after a 15 minute walk you should see a sign on your right for 法然院. Cross the canal and you’ll find yourself on a side street. Go left again and you’ll find the entrance on your right leading up through the woods. Alternatively, coming directly from Shirakawa Dori, just go in a straight line east from Fresco Supermarket till you get to Tetsugaku-no-michi and then follow the directions as above. Here is a map.

Here’s that video I promised. This performance features max, ryotaro and yung tsubotaj of raw elements + special guests kota and kanji from the band Dodo. The song is called “Whisky is thicker than blood” and it’s a cracker!