Sean Roe‘s next JunKroom event will take place on Friday December 18th at Urbanguild. I dropped him a line via facebook. 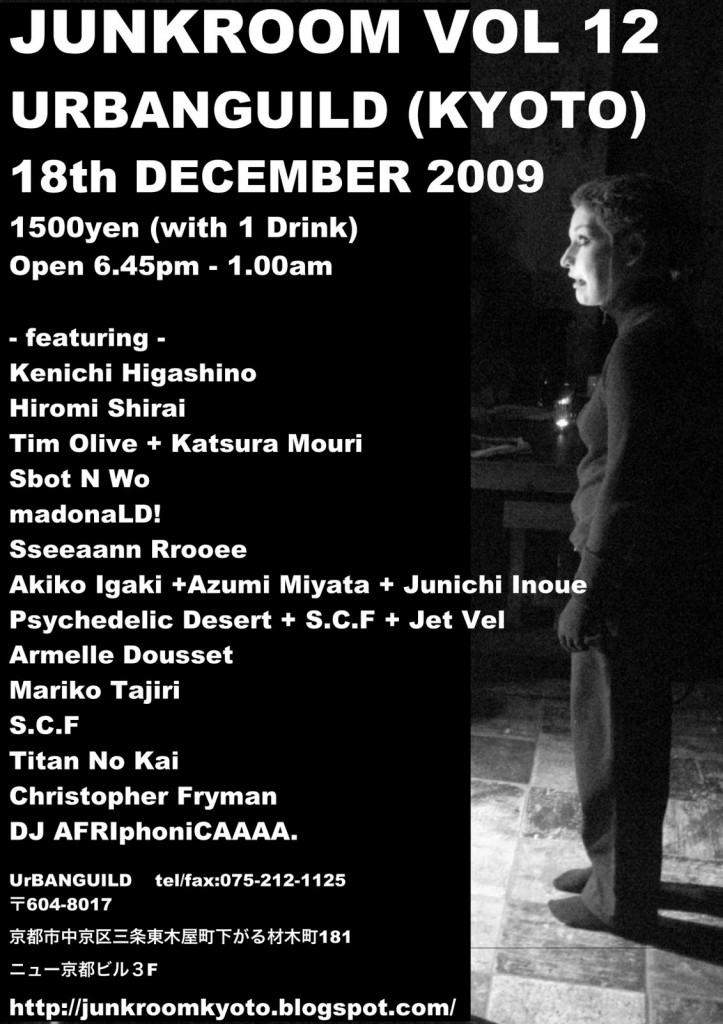 Deep Kyoto: Your last event (For Gaza 2) was jam-packed. Are you expecting similar crowds?

Sean Roe: Usually we get a good crowd at the JunKroom events (about 80-90 people) The last For Gaza event had crowd of about 130! Thanks to everyone who came to that event. This JunKroom event is going to be a party to celebrate two years – our first show was almost exactly 2 years ago at Aoi Recycle shop on Kitayama Dori. Many of the performers from the 1st event will be joining us again for this show. I’m going to dust off the Mirror ball and make sure I have some Fela Kuti records in my bag.

DK: Just how popular are you now with Urbanguild for bringing in so much custom?

SR: I dunno – it’s a great space and the events that take place there are very varied. They’ve been very supportive and accommodating. As an independent non commercial live space, its definitely worth investigating if you’re interested in local music and more experimental / multimedia or dance type events. It’s my favourite live house in Kyoto so I’m happy to help them back.

DK: You currently have 16 artists listed for this event, with the possibility of even more. You probably don’t want to but if you had to pick out the three unmissable highlights what would they be?

SR: Almost impossible to single out anybody… but I’ll try. It might be better to see the event as a continuous single performance with a large number of performers. The set up will be a little different to normal. Some performances will take place on the main stage, but I’ve asked other performers to make use of the entire space. Titan no Kai have risen to the challenge, and will mingle with the audience. They did something similar the last time they performed at JunKroom vol 6 creating a feeling of tension, excitement and dread (!) amongst the audience- like being on the set of a theatrical piece produced by the ghost of Shuji Terayama. 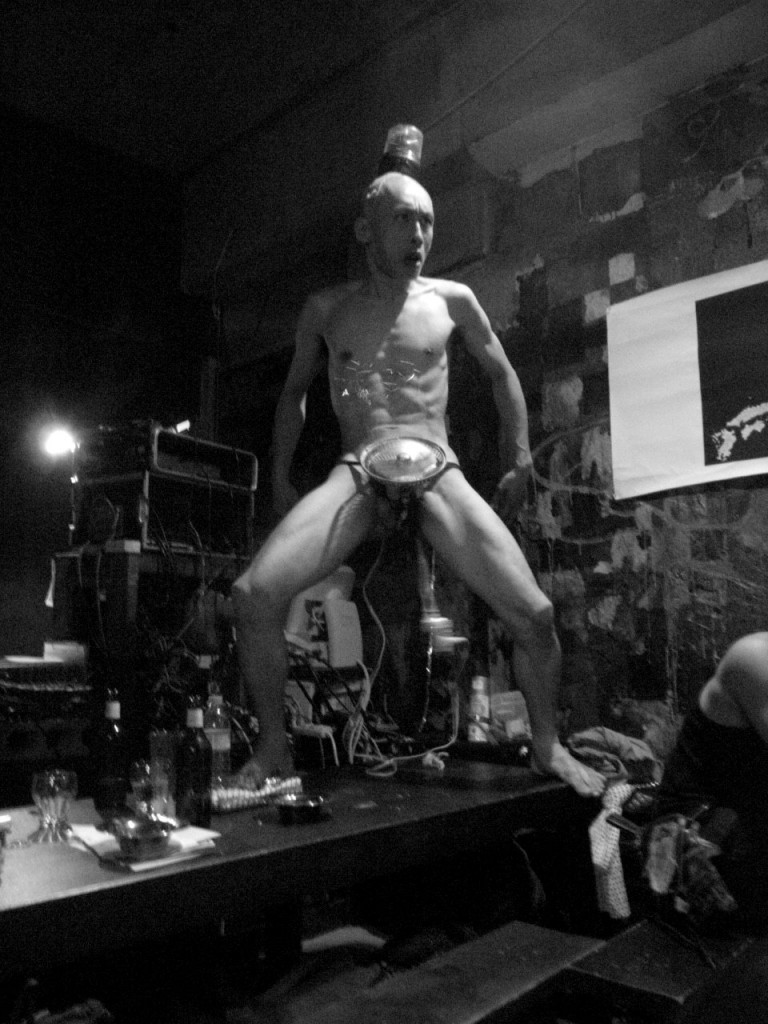 I’m intrigued by the work of Sbot N Wo (from Canada) who are visiting JunKroom as part of their tour of Japan. I’ve seen some clips of their performances on YouTube and I ‘m looking forward to seeing them perform live. As it happens, theres a lot of multi-media, interactive and video work work being presented at the event this time, (Sbot N Wo, Mariko Tajiri, S.C.F, Junichi Inoue, Armelle Dousset). In contrast to the use of technology, we’ll also have Bangladeshi picture scroll story telling by the remarkable performer Kenichi Higashino. There’s sooooo (another o) much to see on the night, so the best thing for the readers of Deep Kyoto to do, is to check out the artists profiles on the JunKroom blog and follow any links to get a better idea about the works of the performers.

DK: And as the event starts at six thirty and finishes in the wee hours – what time would they (the unmissable highlights) be playing?

SR: All the performances will be unmissable! So far as the timetabling goes, we have a lot of performers visiting from Kobe (Hiromi, Kenichi and Mariko) and from Osaka (Psychedelic Desert, Tim Olive, Jetvel) so these artists will almost certainly be on before 10pm (so they have time to return home by train) The venue is usually pretty packed by about 9.00pm or 9.30pm so I think that might be a great time to unleash Titan No Kai onto an unsuspecting audience! The final timetable won’t be decided till just before the event though.

DK: Tis the season! How about Donald the Nut doing a Naked Santa?

SR: Well… Donald the Nut has chosen a new persona for this months event. He will perform as MADONAld! While he’s not afraid of performing in a Santa outfit (see photo below from Junkroom vol 1) I’m expecting him to do something irreligious this time (God Willing!) 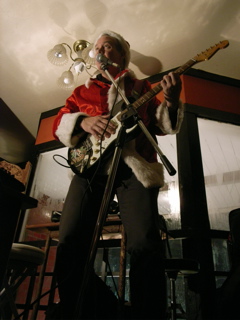 DK: You are also organizing a record fair at Urbanguild in early January. Can you tell us more about that?

SR: The record fair will definitely take place on 10th January (Sunday) at Urbanguild. It will start at 11.30am and finish at around 10.30pm. The general idea is to have a regular record/cd/book fair until 6.30 for which there will be no charge to visitors, but after 6.30pm we’ll charge 1000 yen at the door as we’ll have a combined Record fair and JunKroom event (Vol 13). I’m finalising the line up now and will post the details on the JunKroom blog in the next week or so. This should be an interesting event and 11th Jan (the day after the event) is a public holiday so we’ll definitely continue later than 10.30pm. I’m looking for sellers though. If you want to get rid of books, cds, or records and you’re interested in participating in the event as a seller, please get in touch with me through the JunKroom blog or the JunKroom records blog, where you can also find more details about the event.

Thanks Sean! JunKroom Vol 12 is at Urbanguild on December 18th. Doors open at 6.30pm. The event starts as soon as you walk in and finishes when you leave.
Ticket Price 1500yen (includes 1 drink!)

To find Urbanguild go down Kiyamachi Dori from Sanjo for approximately 150 meters. Urbanguild is on the east side, on the 3rd floor of New Kyoto Building. Access is by elevator or the stairs. Here is a map.

Related articles:
An Interview with Sean Roe
For Gaza Vol. 2

All images in this article are used courtesy of Sean Roe.