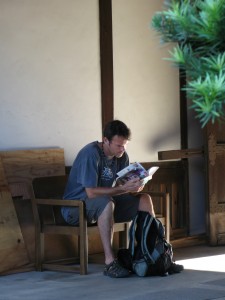 Deep Kyoto friend and contributor Ted Taylor recently completed a two and a half month hike along the Kumano Kodo and the Shikoku 88 temple pilgrimage. Returning briefly to Kyoto before continuing his travels he stopped for ten days at the Kyoto Vipassana meditation center.  Today he sent me a report on his experiences there. Ted writes:

I found myself sharing dormitory space with six other men, none of whom would talk to me.  Which is no surprise really as we`d taken a vow not to speak during the 10 days which make up the Vipassana meditation course.  The Center is about 90 minutes north of Kyoto, at the end of a lovely drive into a remote valley.

The silence part isn`t really the problem (which may surprise those who know me).  It is the sitting:
ten and a half hours a day, split into 90 to 120 minute chunks.  In which to sit, and sit, and sit.  The body begins to fidget and whine like a two year old.  The mind begins to yell “Boring, boring, boring!” like Rick from The Young Ones.  Which is exactly the point.  The goal is to recognize that thoughts and bodily sensations, both positive and negative, are temporary and fleeting.  The only constant is Reality itself, which we`ve lost track of, as we gird ourselves with tasty food, cultural events, and the Internet. (No disrespect intended, Deep Kyoto.)

After the initial orientation session where we listened to a recorded voice telling us the rules (which I quickly dubbed, `The Dharma Initiative`), we mounted our cushions for the first time.  And did little else.  The recording had actually used the phrase, `confine you here`, and it did indeed have the feel of prison:  seemingly unending hours spent staring into space, with the main diversions being tasty meals,  long showers, walks in the yard, and light stretching.  We weren`t however allowed to read, as any reading or writing materials, (plus cameras, iPods, cell phones, etc) were confiscated on the first day.  The only reading allowed was the constant flow of thoughts, most of these being monotonous at that.

The one voice we did hear was that of S.N. Goenka, who created this course.   In the evenings, we watched videos of his dharma lectures, which were thought provoking, witty, and easy to understand.   During the 3 daily one-hour group sittings. we also heard his meditation instructions, which were spoken with a slow, emphatic manner, in this weird Bela Legosi voice, the words trailing off as if the sentences themselves were narcoleptic.  During the other meditation sessions, we had the choice to sit in the main hall, or in our dormitory room.  I found the latter to be greatly beneficial, as we were given permission to stretch our legs, or to lie down for a few moments if we chose.  To do so in the main hall, was noisy and distracting, detracting from one of the goals of the course, which was to pretend that you were doing the course in isolation.  In the true isolation of my room, I found my meditation to be much deeper.

The effects of the course became apparent quickly.  With no distractions, the mind grows quiet, and becomes more equanimous.  You don`t seem to be bothered by your dormmate`s snoring, or by the cold, or by the fact that you don`t get dinner.   And these positive effects remain.  The scenery on the train ride home was a study in beauty.   Every note of the music on my restored iPod was perfect.

With my background in zen and yoga, I do have some issues with the methodology of the course, but I put these aside as best I could and accepted what Vipassana had to offer.   To my  supreme benefit.   I highly recommend this program, though not to the faint of heart (or leg).  This course is the extreme sport of the meditation world, filled with hardship and pain, yet offering great reward.  Though that could just be my mind playing tricks on me.

Kyoto Vipassana Center is located in the north-western part of the prefecture, 90 minutes by train from Kyoto station. To find out more about the Vipassana center, check out their website here. You can read more about Ted’s continuing adventures on his wonderful blog: Notes from the ‘Nog.