In our final post of 2018, Edward J. Taylor completes his walk on Sanjo in the company of friend Max Dodds. Together they contemplate the shared memories of our collective history and wonder how the present will be remembered in times to come. The first part of this walk can be read here. 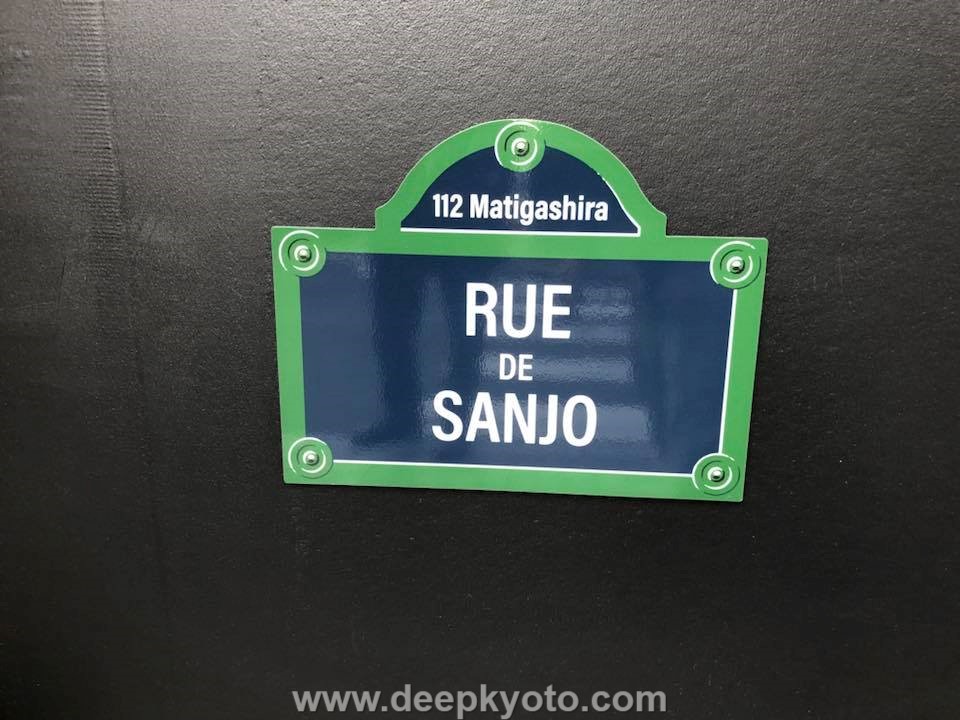 As we carry on up Sanjō, I recognize Max’s point that most of the road west of Karasuma is a desert of sort. Over these walks I’ve noted a sort of striation to Kyoto, and as one leaves the thriving town center behind, what one is exposed to is a more mundane set of concrete houses built over the last thirty years. But this first block shows promise. The Sumizubaki isn’t much older than the bland concrete boxes around it, dating to just 1979, but the original architectural intent had been to create something that would have looked at home in Meiji-era Kyoto. The wooden building has unique columns that are almost Corinthian, former home of a trading company whose bespoke high ceilings offer a spacious look to the shops within. The wine bar on the first floor is a good place in summer to sit and chat, and a few years ago, editor Michael Lambe and I did just that, discussing the initial idea that ultimately became the Deep Kyoto: Walks book, and by association, this very post.

The Korean themed Somushi Kochaya also has a literary connection for me, as it hosted the release party for the Korea issue of Kyoto Journal. The beautiful structure and wrap-around earthen wall would look right at home in the Korean countryside. There is a more Japanese approach to tea in the Iyemon Salon across the street, behind what is known as the Tree of Prosperity to neighborhood residents (for a reason I’ve been unable to discover.) Any prosperity for Iyemon Salon would certainly be derived by the warmth of the open space, and the staff’s enthusiasm for tea culture.

The road descends down a slight hill, leading to Horikawa-dōri through a rather featureless section of the city. A bit of charm does remain, like the dapper haberdashery, and the faux-French look to Brasserie Vapeurs, set temptingly at the back of a small lane. Ironically, this area had once been the center of the fashion industry, from the Heian period until the late 1500s when Hideyoshi decided to move them out of this strategically ideal location. One holdout from the time was the Onishi family who made iron kettles in which to brew water for Hideyoshi’s second-favorite pastime, tea ceremony. (The general’s favorite, presumably, was squeezing victories out of his enemies.) The Onishi Seiwamon Museum houses a good selection of their 400-year history. Perhaps they once tempered their iron with water from the Tachibana spring just a block away, in front of what is now a sweet shop bearing the same name.

Arguably the oldest and most beautiful building has since 1834 been the home to incense makers Hayashi Ryushodo. We’re drawn to a vermillion tray of powder out front, and a few kewpie doll-looking figures which are actually incense themselves, though the friendly young woman sitting on the tatami mats behind the counter jokes that she feels bad lighting their heads on fire. Her father, the 6th generation incense-maker, sits nearby, quietly attending to his craft.

We cross Horikawa and enter the covered Sanjō arcade. A handful of shops were opened here in 1915, their number steadily increasing over the subsequent century. Most remarkably, nearly every shop appears to be in good economic health, something that can’t be said for similar arcades throughout the countryside. Whereas the earlier section had been all Meiji, this one is recognizably Showa, which delights me, as I too have gotten caught up in the Showa period nostalgia, brought about by my love for 1950s and 1960s Japanese film. This is dangerous I suppose, for I am harkening back for I time that I never experience firsthand, coming to Japan six years after the period finished. This all gets me thinking about whether there will be a Heisei nostalgia, and what architectural features will be later identified with it. Sadly, it might be the same boring concrete facades that I’d just been walking through, which I dismiss so quickly in these pieces.

Max too appears to love this arcade, in particular the old dusty storefronts, at odds with the tidily remodeled living quarters above them. And nearly inevitably, there is always one family who went full out and built something so modern that it destroys the uniformity (I’m looking at you, Okada-san).

The older shops are busy with older patrons, namely those purchasing items useful for the annual year-end housecleaning. The kitcheneries and food markets will get busy closer to the holiday itself. Some of these Showa facades have been utilized by cafes for their old-time charm. Sarasa 3 is a familiar face, but there are many others now, including a few which offer take-away, to be enjoyed in the sunny park midway up. This used to also host the Kyoto Craft Beer festival in summer, something many Kyoto residents hope will someday return.

Newer shops have also taken hold. Most puzzling is the “Hip Hop and Soul” school that actually has desks lined up, in front of a woman teaching at a whiteboard. Two others that catch the eye are the Gandhi Mart and the nearby Prince of Peace vintage shop, which may or may not have something to do with Christmas. A couple of places are most certainly capitalizing on New Years, like the shop selling cards, and the rice shop next door taking orders for kagami-mochi, the two-tiered rice cake that demarks both the new and outgoing years. There’s also a surprisingly large number of clock shops on a road on which time seems to stand still.

At the arcade’s far end at Senbon-dōri, we reverse direction and walk halfway up the arcade for a coffee at Ran Hotei, run by a friend of Max and I. Randy tells us that the shop dates to 1910, and he has done a nice job honoring that historical look, while creating a comfortable space that includes large sofas and evocative music. Eventually our conversation turns to other friends, most of whom have left Kyoto at some point. But a part of them still remains here, at least in memory. But isn’t that all that history is, simply collective memory? Little wonder then, the diversity of elements by which it can be measured.

Also by Edward J. Taylor:
* Walking through the history of Kyoto’s “Oil Alley”: Aburanokōji
* From Industry to History on Kyoto’s Muromachi-dōri
* A Stroll Along Teramachi: Kyoto’s “Temple Street”
* Tracking the Changes on Kyoto’s Bukkoji-dōri
* Shinmachi and the Giants of Gion Matsuri
* Ambling Down Kyoto’s Yanaginobanba Street
* Strolling in Kyoto: Takeyacho & Ebisucho
* Following the flow of the Takasegawa on Kiyamachi Street
* An In-between Day on Kyoto’s Ainomachi
* Miracle on Third Street: Walking Kyoto’s Sanjo Dori Part 1