“Porta Chiusa” the Swiss Interdisciplinary Unit who performed at the last JunKroom are making a return visit to Kyoto on 19th May.
I really recommend them!! They will be performing at the Live spot “Rag” which is on Kiyamachi Dori about 150 metres north of Sanjo Dori. 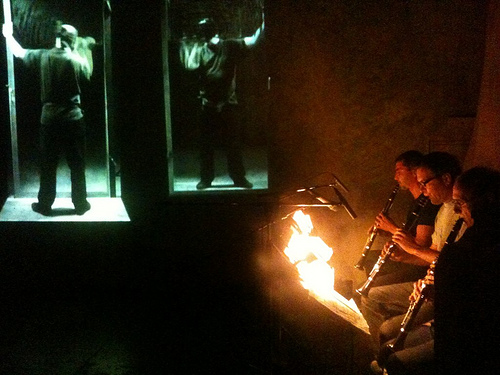 Here are a few details:

The “Porta Chiusa” composition by Paed Conca will be produced live in concert by clarinetists Hans Koch, Michael Thieke and Paed Conca accompanying the three works of art (back projected Video). The Video which acts as a backdrop to the 3 clarinet players consists of three parts: 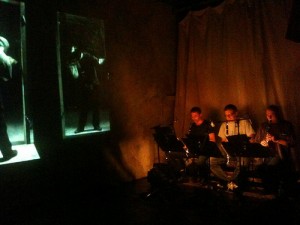 a)The blindfolded artist Giovanni Di Stefano will try to paint a glass door out with black oil chalk. This performance has been filmed from both sides of the door. The artist attempts to cover the entire glass surface of the door so that no transparent space is left.

b) Heike Fiedler, Author and Performer has created a text piece (Forteressensiemangerneles) in various languages, which “plays” with ideas relating to marginalization and oppression. 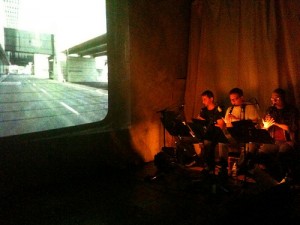 c) The Filmmaker Giorgio Andreoli took footage in 2008 during the deportation of repelled asylum seekers at the Zurich/Kloten Airport and edited them into a movie collage. Intentionally the faces are not shown.

Thanks Sean! Here’s what Porta Chiusa have to say about their own work:

This interdisciplinary performance bases on the conflict that we are living at the beginning of the 21st Century in a world, which is still built upon national states, within which the people are not treated equally; in which we still speak about color and race and within which nutrition, health and access to education are still greatly conditioned by hierarchal classification. Therefore the theme is the conflict between the “recognition of the inherent dignity and of the equal and inalienable rights of all members of the human family is the foundation of freedom, justice and peace in the world,” (Declaration of human rights from December 10th, 1948) and the fact, that exactly this dignity is increasingly being violated. LINK