Here’s one for the movie buffs. Kurosawa Akira’s classic movie Rashomon will be screened at Kyoto Prefecture International Center on September 11th,  and – here’s the crucial bit – with subtitles! 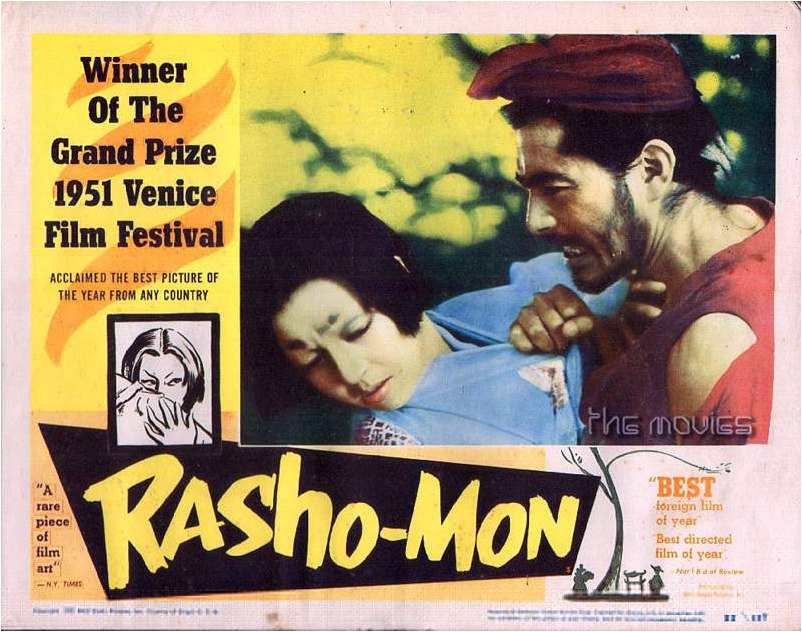 Two other classic Japanese movies will also be shown at later dates. Here’s the good word from KPIC:

In coordination with the Japan Foundation, three outstanding examples of Japanese cinema are being made available to the foreign community. These films, with English subtitles, are not available through every-day rental stores here in Japan, so this is a rare opportunity. Rashomon is being shown in recognition of the 100th anniversary of its director, Akira Kurosawa’s, birthday (1910 – 1998).

Rashomon, September 11 (Saturday afternoon);
Synopsis: This masterpiece by Kurosawa is based on two stories by Akutagawa Ryūnosuke. In 12th century Japan, a travelling samurai and his wife are kidnapped by the notorious bandit Tajomaru. Rape and murder follow. After Tajomaru is captured and put on trial, four different witnesses give four radically different accounts of what occured in the forest.

The Munekata Sisters (directed by Ozu Yasujiro), Friday October 8.
Synopsis: Setsuko is married to the alcoholic and unemployed Mimura. Secretly she has always loved Hiroshi but they both failed to declare their love before Hiroshi left for France several years before. Now he has returned and Setsuko’s sister Mariko, despite her own feelings for Hiroshi, tries to reunite them.

The Twin Sisters of Kyoto (directed by Noboru Nakamura), Friday November 26.
Synopsis: Based on the novel The Old Capital

by Nobel prize winner Yasunari Kawabata, this is the story of the adopted daughter of a Kyoto merchant who discovers she has a twin. They were separated at birth and now live in radically different social spheres

All of these movies have a Kyoto connection. To help put them into a historical and cultural context they will be preceded by a short introduction and followed by a group discussion.

Time: Starting at 1:30 p.m., there will be an introduction of background information, followed by the film showing, and then an open discussion, finishing at about 5:00 p.m.