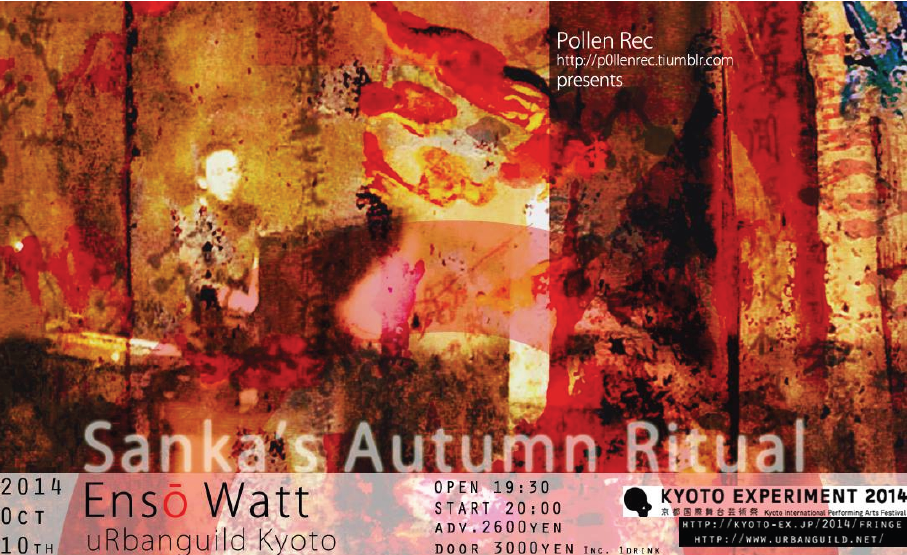 Thanks to Marguerite Paget for sending the following information:

Initiated in 2014 by the sound designer Samuel André, the Ensō Watt artist collective is born in Kyoto from the encounter of artists coming from different countries and raised in entirely different artistic universe, from classical music to electro, improvisation and sound design.

A hundred years after Stravinsky’s revolutionary “Rites of Spring,” the members of this artistic collaboration pursues the experience-cum-experiment by focusing on Japan’s seasonal cycles, especially celebrated by the little-known mountainous tribe, the Sanka.

SANKA, can be translated from Japanese by “Mountain Cave” or “the one who
come down the mountain”. They are a mysterious, some say magical group of
people, who retreated, wandering in small bands through the mountainous regions of Honshu when the rice farmers arrived from the Asian continent in the third century. The Sanka are sometimes called the Japanese Gypsies. Little is known of their history. Although they are mentioned in Japanese chronicles from the 11th century, much of the information about them is vague.“Being a secluded community their cultural development grew far outside the social framework of the rest of the country. They developed their own language
based on natural sounds ie: the hum of the cicada, and their daily lives became dominated by rituals and esoteric rites.” Chris Mosdell

For SANKA’S AUTUMN RITUAL, Ensō Watt celebrates, autumn season in three acts. The music is inspired by the poetry of Chris Mosdell; it navigates between improvisation and conducted improvisation live by Yannick Paget, based on scored music’s elements. The performers, positioned in the audience, generate an immersive, musical surround-experience (broadcast on 4 speakers). More than just a musical experiment, the event is also shot live via a series of 6 cameras, and is processed and projected on 2 screens during the performance.

The exploration of the season’s cycle started this summer with the SANKA’S
SUMMER RITUAL (2014 July 18th at Urban Guild) :
Act I : rites of dragon fly, driving the dream machine. Act II, rites of the hundred
wind chimes, rites to refresh the earth, rites of the great fire dance. Act III the insect « hum » of humanity ritual, dance of the sacred peach.

Ensō Watt will conclude the cycle next year with winter and spring. A cycle that is meant to continue through years…

Why Ensō Watt ?
Ensō: 円相, in Zen Buddhism, an ensō is a circle that is hand-drawn in one or two uninhibited brushstrokes to express a moment when the mind is free to let the body create. The ensō symbolizes absolute enlightenment, strength, elegance, the universe, and mu (the void). It is characterised by a minimalism born of Japanese aesthetics.

Watt: reflects the electric energy impulsed by the musicians and the artists of this collective.

Ensō Watt is a space of experiment and overture where frontiers between
musics, classical, electro or sound design melt, where scored music meets
improvisation, where arts (music, image and poetry) enters a free dialogue, where the melting pot of culture is a strength. And so what? with this unique spirit breathed by Kyoto city everything’s possible, isn’t it?