At the end of this week our good friend the artist and poet, Stephen Gill, will be displaying his ike’ishi or “live stones” along with eight other artists at the Yukososha gallery. Stephen says, 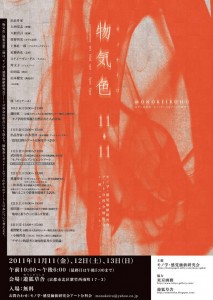 …for the first time this year in Kyoto, I will be showing some new ike’ishi works in a group show entitled ‘Spirit Signs’, along with Takahiro Kondo and others. The gallery is an extremely old farmhouse near Daitokuji. If you can find the time, please drop in and see the show. I will be there most of the day on Nov. 11 and 13. The show opens on 11th and closes on 13th – very short, so don’t miss it! Go to the site link for the complete flier, both front and back. The opening hours and a map are included. Hope to see you and hope you enjoy it.

Stephen collects beautiful stones from all over the world and arranges them in an original art form he calls ike’ishi (生け石).  石  – ishi means “stone”, and 生け ike comes from the verb 生ける which means to “arrange” living things.  This is the same character used to write ike’bana (生け花 or flower arrangement). Stephen will be exhibiting along with eight other artists who, working in a variety of disciplines, seek to express a numinous or spiritual quality in material objects. Though I have had a private tour of his studio, I haven’t yet had an opportunity to see Stephen’s works in exhibition before, so this is a must-see for me!

Here are the exhibition details:

Place：Yukososha (遊狐草舎), the aforementioned farmhouse which is near Daitoku Temple and about 15 minutes walk west from the north exit of Kitaoji Station. The map on the flier mentioned above is a bit hard to decipher so try this one.

Stephen Gill has previously appeared on this blog chiefly in his role as a conservationist, so here are some more biographical details:

Stephen Gill (poet’s name: Tito) graduated from London School of  Oriental and African Studies with a degree in Japanese Language & Literature, and received a diploma in Gemology at Sir John Cass School of Art, London. Currently he is translating a gemstone dictionary, lecturing part-time at Kyoto University and making occasional radio programmes, whilst also continuing his activities as an artist, poet and conservationist. He is the originator of the art of stone arrangement which he calls 「生け石」 or “live stones”. A former committee member of the British Haiku Society,  he currently leads the Hailstone Haiku Circle here in Kansai. His haiku has won several awards and in 1989 he won the Sony Prize for his BBC radio programme “Insect Musicians”.

Stephen is also very active with the conservation group P.T.O. (People Together for Mount Ogura), about which you can read more here.