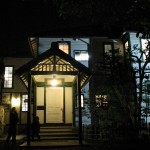 On Thursday night I attended the Hailstone Haiku Circle's English Haiku class for the first time and thoroughly enjoyed it! About 12 people were present including the British poet/artist Stephen Gill and Sean O'Connor an Irish poet/musician. The first part of the class was taken up with what Stephen called the 添削コーナー ("correction corner"). Here haiku that have been submitted … END_OF_DOCUMENT_TOKEN_TO_BE_REPLACED