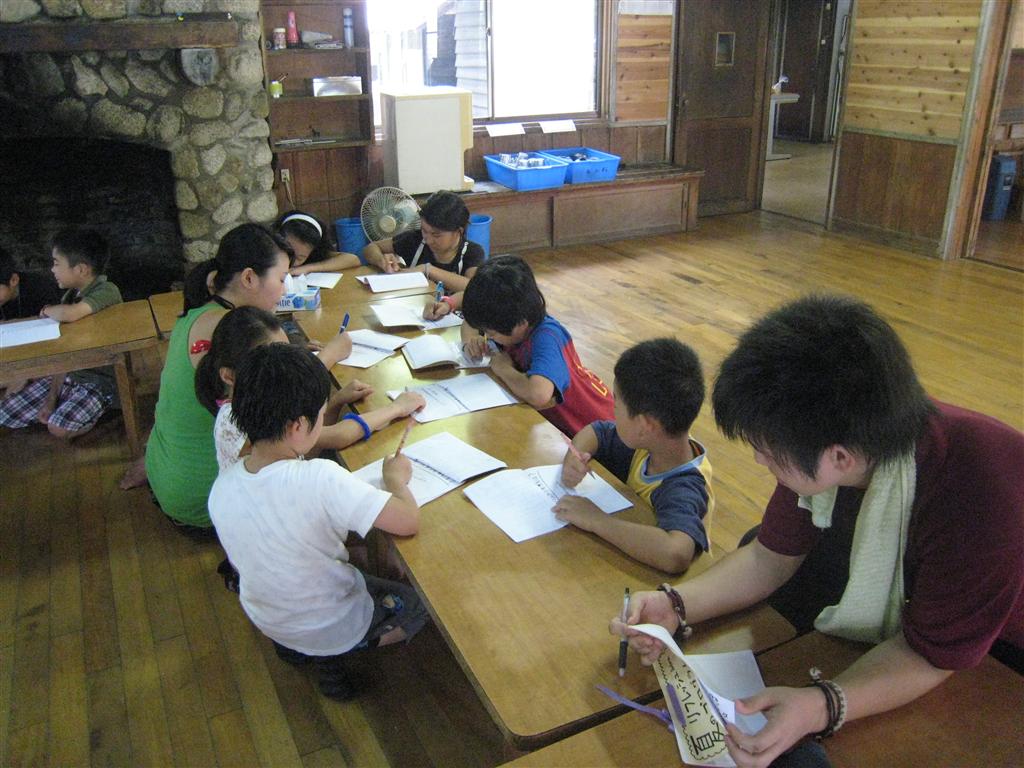 A new article from our friend Jason Bartashius.

The Kyoto YWCA has offered a home stay program for Fukushima children on four occasions since March 11th each lasting for varying durations ranging from five days to nearly two weeks. To prevent radiation exposure playtime outside for many children has been greatly restricted in Fukushima. To let them to be able to enjoy the outdoors again the children are invited to Kyoto where they can go camping and learn about the historic city and its culture. “It was so fun. I want to come back to Kyoto,” said one child. [ref]Kyoto YWCA Newsletter.  No. 510 (September 1, 2012)[/ref]
The YWCA has provided outreach to Japanese Filipino children by making efforts to invite them to participate in this program. Unable to read Japanese, many Filipino women have not had full access to information about support services and aid in the wake of 3/11. With the help of Hawak Kamay Fukushima, the YWCA invited their children to Kyoto. Another session will be held again next summer. “Next year we’d like to invite children from families who are struggling economically,” said Chie Yoshimura, a part-time staff member.
Below I give a brief summary of some aspects of the current situation in Fukushima to elucidate why the program is important even as the government is re-opening parts of the evacuation zone. I then present the details of the program and summarize the other types of aid the YWCA has given immediately after 3/11 as well as the support they continue to provide to Fukushima families.

Escaping the Threat of Radiation

Students who participated in the program have thus far come mainly from the cities of Koriyama, Fukushima, and Date. The program is not limited to children from these areas. However, the YWCA has a strong network in each of these cities making it easier to promote the program.
All three cities are located outside the evacuation zone. But even in these areas parents have worried about radiation exposure. According to a May 2011 Bloomberg article, students at Shoyo Junior High in Date City, which is located about 60 km northwest from the Dai-ichi plant, were told not to play on the schoolyard as many wore caps, masks and long sleeved jerseys to school.[ref]Hyuga Takahiko and Shigeru Sato. “Children Don Masks, Hats In Fukushima As Radiation Looms.” Bloomberg, May 11, 2011. http://www.bloomberg.com/news/2011-05-11/fukushima-students-wear-masks-as-radiation-looms.html (Accessed September 2, 2012). [/ref]
As for Koriyama, according to an NHK report from last November, a study showed that children there had comparatively smaller weight increases. Dr. Shintaro Kikuchi, the pediatrician who conducted the study, “noted that the smaller weight increases could be related to reduced appetite resulting from less exercise as well as changes in the secretion of growth hormones due to stress.”[ref]“Smaller increase in children’s weight in Fukushima.” NHK, November 7, 2011. http://fukushimaupdate.com/fukushima-update-day-243/ (Accessed September 2, 2012 on Fukushima Update). [/ref] It is presumed that reduction in exercise is a result of the children being forced to stay indoors.
In August 2012, more positive news came from a report in the Journal of the American Medical Association (JAMA), which “found that residents near the Fukushima nuclear power plant in Japan appear to have suffered from minimal exposure to radiation. The study, which is the first one to research the effects of last year’s Fukushima nuclear disaster on the surrounding areas, found that, on average, residents appear to have internal radiation levels that are equivalent to those of one-half of a chest X-ray.” But, researchers are still anxious about long-term effects.[ref]Evans, Vanessa.  “Residents Outside Fukushima Show Low Levels of Radiation.”  Yahoo! News, August 15, 2012. http://news.yahoo.com/residents-outside-fukushima-show-low-levels-radiation-162800259.html (Accessed September 2, 2012).[/ref]
Strontium-90, which is believed to cause leukemia, is a concern for Dr. Martin Walter from International Physicians for the Prevention of Nuclear War (IPPNW). Dr. Walter is collecting baby teeth of Fukushima children to test them for Sr-90. He plans to conduct the study annually for a period of up to ten years.[ref]Dr. Martin Walter, interviewed by Jason Bartashius, Palace Side Hotel, August 29, 2012.[/ref]
Thyroid glands are also being closely watched. A study showed that nearly 36 percent of Fukushima children have growths on their thyroids. An announcement came at the end of August that a new study will be conducted to check the glands of children living outside of Fukushima. The study aims to help determine if there is a connection between the nuclear accident and the growths.[ref]Kyodo.  “Non-Fukushima children to be checked for thyroid abnormalities.”  The Japan Times, August 28, 2012. http://www.japantimes.co.jp/text/nn20120828a5.html (Accessed September 2, 2012).[/ref] Finally, to be added to the list of worries is a concern regarding exposure to gamma ray radiation in the rubble.[ref]The Associated Press. “Japan: Post- Fukushima Radioactivity low, gamma ray radiation more of a concern.”  Yahoo! News.  August 27, 2012. http://news.yahoo.com/japan-post-fukushima-radioactivity-low-gamma-ray-radiation-135206565.html (Accessed September 2, 2012).[/ref]
Given the complicated nature of the crisis it is not surprising that many concerned parents have adopted ‘a better safe than sorry’ attitude. Their concern is evidenced clearly by the situation at schools in Hirono, Fukushima. Until last September the town was a part of the evacuation zone. Recently the schools have reopened in Hirono, but enrollment is only at around 20 percent of what it was before the crisis began.[ref]Mainichi Shimbun.  “School in Fukushima town reopen after 1 ½ years,” Mainichi Shimbun.  August 27, 2012. http://mainichi.jp/english/english/newsselect/news/20120827p2a00m0na009000c.html (Accessed September 4, 2012).[/ref] People still seem to fear radiation and are keeping their distance.
“No one knows how dangerous radiation is. The nuclear crisis has not been resolved yet. The families and children worry and they have a lot of stress. To offer them some relief we want to continue this program,” said Yoshimura. 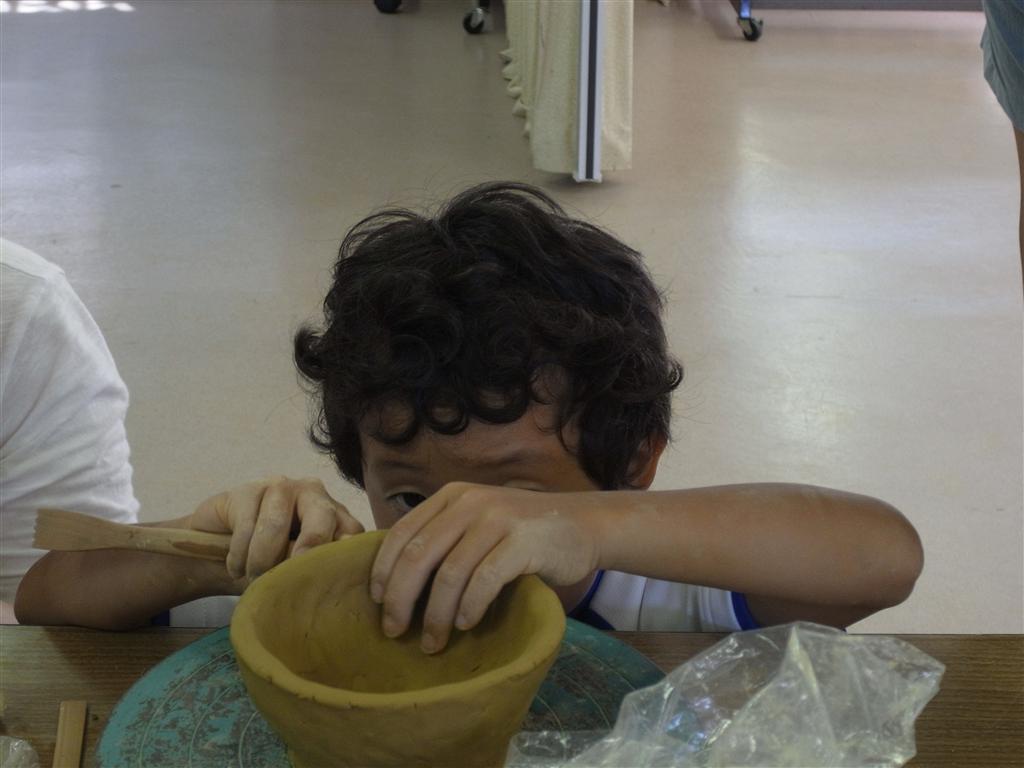 The program’s first session took place last summer. Sixteen elementary school students participated. They took a tour of Kyoto to see major temples including Kiyomizudera, Ginkakuji, and Byodoin as well as other sites such as Kyoto Tower, eigamura, a train museum and the peace museum at Ritsumeikan University. Cultural activities and workshops were also held. The students experienced traditional tea ceremony, learned how to make ceramics and took a cooking class. Additionally, with the help of the YMCA, camping trips in Kobe and Kyoto were arranged, and the YWCA and local community held a festival for the children along with a bazaar to raise money.
The Kyoto YWCA, Japan YWCA and donations from the local community funded the first session. Ippodo teashop helped arrange the tea ceremony. Volunteers consisted mainly of YWCA staff.
The second session took place at the end of March 2012. Sixteen children attended. Although the session was primarily for elementary school students, an exception was made for two junior high students. The make-up of volunteers was more diverse this time as well with around ten university students assisting. A majority of the session was dedicated to camping in Uji. Funding came from Akai Hane, Kyoto YWCA, Japan YWCA and local donors.
This summer two sessions were held. The first session was for elementary school students and the second was for junior high and high school students. The former lasted for nearly two weeks with twenty children participating. The children enjoyed camping, swimming, a children’s festival, sightseeing, a peace workshop and a variety of lessons including taiko, piano, theater, ceramics, bread making, English, and Korean culture.
Eleven junior high and high school students attended the last session, which focused on helping them with their studies. Retired teachers and university students provided tutoring each day. To inspire the students and encourage them to think about their futures arrangements were made for them to visit Doshisha University and go to the open campuses at Ritsumeikan and Kyoto University. Funding came from Akai Hane, JR Foundation, Chiiki Souzou Kikin, Kyoto YWCA, Japan YWCA, and local individual donors.

Other Forms of Support

In the months following 3/11 the Kyoto YWCA sent money, supplies and volunteers to the devastated regions. They then turned their efforts to find ways to contribute support for the long term. In addition to the home stay program for children other support continues to be offered to Fukushima people.
The Kyoto YWCA has a second home program in which Fukushima families may use an apartment free of charge (except for utilities) in Kyoto to temporarily escape the fears of radiation and find peace of mind. Round trip train fair is provided for those who wish to use the apartment. To date five families have made use of this arrangement.
Secondly, evacuees who have relocated to temporary housing in Kyoto have been invited to participate in the regular classes and programs at the YWCA and utilize their services. Kyoto YWCA volunteers have also visited Tohoku over a dozen times to offer workshops for children and teenagers. Around half of the visits were to Fukushima.

Chie Yasumoto can be contacted at yoshimura@kyoto.ywca.or.jp

Donations for the Fukushima support at the YWCA can be made via bank transfer. Please note which program you would like the money to go towards.

Jason Bartashius moved to Kyoto in 2011.  He is a lecturer of Japanese Religions and an English instructor. Jason also manages the volunteer project After School Lessons For Tohoku Children that helps kids affected by the tsunami.   As a writer he works to bring attention to the ongoing issues surrounding the March 11th disasters.  He has made contributions to Deep Kyoto that focus on Kyoto’s efforts to support Tohoku and evacuees who have relocated to Kyoto. You can read his previous articles here.