Here’s this month’s addition to our ongoing series of profiles of Kyoto-based photographers. Each photographer chooses five of their own favorite pictures and tells us a little about what those pictures mean to them. This time I asked Kyoto resident Paul Crouse. Paul chose people pictures for his DK profile today, but his pictures of places around Kyoto (like the one above for example) are also remarkable for their unusual angles and subject matter. Right after you finish reading this piece head over to his gallery “Places I’ve Seen” and take a look. Back to Paul’s choices though – of the pictures below, can you guess which is my favorite? Paul says…

Editing my own photos is always a bit of a nightmare. While editing other people’s photos are easy (“I like that one, that one and… that one.”). All of my insecurities bubble to the surface editing my own. (“They’re all horrible!”). Finally, after being gently pushed by Michael (“Where are your pictures, Paul?”), I decided that my favorite technique for hiding from my insecurities, procrastination, had to be overcome. (“I’ll have them to you by Friday”).

I gave myself some grounds rules for choosing pictures: no old shots that have been published or displayed before. (I don’t want to end up like a washed up country singer playing the same 2 hits in Branson, Missouri for the rest of my life.). And no cliché Kyoto pictures, either. (“Wow, that looks like a postcard!”) After a long swim in my hard drive, I came to the conclusion that my favorite pictures from Kyoto are of people, so that is what I am going to share with you here.

My background is the news business (don’t believe what you read in the paper), so I am accustomed to photographing people in almost every imaginable situation. I think a great photo of a person gives the viewer a glimpse of their soul. “It looks like a postcard!” is considered an insult the way that I was taught photography. It means that you haven’t told a story, you have only produced something pretty that anyone with a camera, and a bit of skill, can do. (Of course, postcard photographers make a lot more money than any news photographers).

But to capture a bit of a person’s inner essence? Now that is a real challenge! (“The eyes are the windows to the soul.”).

This is a photo of my friends Kaori and Oren, and their son Mihael. I can really feel her love in that hug.

Suzuko is the daughter of another friend of mine. I don’t have much to say about this photo other than the fact that I just like it. Suzuko is a fine young woman, and I think this shot shows her inner beauty as well as her outer beauty.

This is a photo of my friend Ted Taylor (aka: Yoga Ted), the soon-to-be-famous lead actor in Roger Walch‘s new film Children of Water, amongst other things. We were on a ferry in the Seto Inland Sea when Ted — looking very pirate-like — stuck his head out of a porthole. The way his bandana matched the green paint of the steps was a brilliant stroke of luck.

Yuki-kun is a great guy. He is two years old and is a very gentle lad. We were having a picnic at the Kyoto Imperial Palace Park and he was trying to figure out why I kept putting this big black thing in front of my face.

This is a photograph of my wife Shino taking our late mother Kaoru for a walk. Kaoru had suffered from Alzheimer’s disease before she passed. We miss her very much. 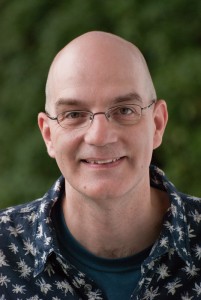 Paul Crouse is a 15 year resident of Kyoto and a former staff newspaper photographer with the Grand Rapids Press in Michigan, USA. His current day job is at the Kyoto YWCA (that’s “W” not “M”) where he gets to hang out with people like Yuki-kun — as opposed to taking pictures of car accidents, murders and political propaganda. He likes hanging out with two-year-olds much better.

You can see more of Paul’s pictures at: www.paulcrouse.smugmug.com