On March 18, 2011 Yuko Nishiyama and her three-year old daughter, Mariko, left Fukushima City, 60 km from the Daiichi plant, to live in Tokyo. In June 2011, Yuko her parents and Mariko relocated to Kyoto. In total around 800 Tohoku evacuees have come to Kyoto and about 600 of them are from Fukushima Prefecture. Fukushima evacuees are choosing to come to Kyoto because it is one of the prefectures that has offered aid to people living outside the evacuation zone.

I sat down with Nishiyama to talk about the struggles and concerns evacuees face as well as the support projects she has been organizing. Nishiyama is an evacuee, a Fukushima mother, a volunteer, and an activist. In February she did a Greenpeace sponsored speaking tour in Switzerland for which she spoke about her experiences to raise awareness. Here in Kyoto she manages two support groups for evacuees, often gives public talks and has been appearing in the local media.

Concerns, Uncertainties and the Struggle to Map Out the Future

When I interviewed Nishiyama she spoke of the major concerns of evacuees. “Evacuees’ lives are not so easy. Most of them live here leaving their husbands at home and they hardly meet them, ” said Nishiyama. The dislocation of people has led to families being split up often with fathers either staying on to work in Fukushima or nearby areas and mothers and children relocating to other prefectures.

Evacuees have had additional financial expenses such as moving and transportation costs to visit family. Although no rent is necessary for temporary housing units, often evacuees must bear the cost of the utilities. The burden of this lies in the fact that husbands are living separately and thus additional expenses must be paid to maintain two homes. Furthermore, some have vacated homes for which they still are responsible for making house payments.

“The compensations we received does not pay for all expenses we have such as moving costs, living costs and transportation costs,” Nishiyama said.

People are struggling to decide whether or not to permanently resettle in Kyoto or return to Fukushima. “We really have to know what’s going to happen by living there for a long time, especially for kids. Emotionally yes we really definitely want to go home,” said Nishiyama.

Temporary housing units in Kyoto are available for a maximum of three years. In order to stay in Kyoto many may have to find new employment. In Japan, switching jobs in mid-career is not easy to do and even if done it can lead to a decrease in salary due to a seniority system that dominates Japanese companies. The decision to permanently relocate in Kyoto or elsewhere would also mean not living close to relatives and friends.

Children’s health was the primary reason many chose to leave Fukushima. The amount of radiation children were exposed to and how much they will be exposed to if families choose to return home weighs heavily on the minds of evacuees.
MIN-IREN, Japan Federation of Democratic Medical Institutions has offered free thyroid health checks for Fukushima children in Kyoto. Nishiyama explained MIN-IREN’s willingness to make available data from the tests along with the results.

She contrasted this with the thyroid tests being offered in Fukushima under the supervision of Dr. Shinichi Yamashita. According to Nishiyama, not all of the data from those tests is made readily available to parents.

Dr. Yamashita of Fukushima Medical University serves as the Radiation Health Risk Management Advisor to Fukushima Prefecture and has been a controversial figure, perceived skeptically by many who believe he is downplaying the dangers of radiation due to his repeated comments that 100 millisieverts of radiation a year is safe. In March of this year, The Japan Times reported: “Studies have found that cancer risks rise at an annual exposure of 100 millisieverts or above but aren’t statistically detectable at lower levels. Below 100, experts can’t say for sure whether it’s safe, just that a link to cancer can’t be proven.”

In June 2012 a criminal complaint signed by 1,324 Fukushima residents was filed against Yamashita and officials belonging to TEPCO, Nuclear Safety Commission, Nuclear and Industrial Safety Agency, Atomic Energy Commission, and the Ministry of Education and Science.

“Many people told me they don’t trust him. All data should be provided,” voiced Nishiyama referring to the thyroid tests. Just days after I spoke with Nishiyama, The Telegraph reported: “Nearly 36 percent of children in Fukushima have been disgnosed with abnormal growths on their thyroids, although doctors insist there is no link between the cluster of “incidents” and the disaster at the Fukushima Dai-ichi nuclear plant in March of last year.”

Nishiyama is also assisting Dr. Martin Walter of the IPPNW (International Physicians for the Prevention of Nuclear War) with his research. She met him this past February during her trip to Switzerland. She is now collecting the baby teeth of evacuees and Fukushima residents. Dr. Walter will pick the teeth up when he visits Kyoto in August to test them for strontium.

In regards to children adapting to their new environs, Nishiyama said that many of the families she’s in contact with say their children like being in Kyoto. Nishiyama attributes this to the understanding of teachers and the warm reception they’ve received in Kyoto. The children do, however, miss their friends and family. 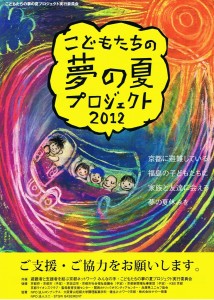 Minna no Te, Supporters and the Kodomotachi no Yume no Natsu Project

Alone in Kyoto, Nishiyama decided last August to assemble meetings for people in the Fushimi temporary housing to help them make friends. The participants formed the group Fureainokai. In addition to arranging meetings for Fureainokai, Nishiyama assumed the role of dialoguing with organizations and residents of Kyoto who wished to offer aid. The Fureainokai meetings have stopped, but Nishiyama continues to use the mailing list to provide updates. Last December she formed a larger support group called Minna no Te to assist all evacuees in Kyoto.

The media had starting paying attention to Fureainokai and Nishiyama’s network naturally expanded. Thus, she decided to launch Minna no Te. “I got to know a lot of people in Kyoto and I thought maybe there are a lot of evacuees in Kyoto who really want to make friends, who want to be in a network, or need something. So I thought maybe I should make a bigger group,” said Nishiyama.

Kyoto residents, organizations and businesses have been contacting Minna no Te to make different kinds of donations; for example, people have been giving used furniture to the evacuees, an Italian restaurant has offered to provide a free lunch for up to 800 people, English teachers and schools have discounted or volunteered their services, and college students from the volunteer group Kizuna tutor children. Evacuees have also been invited to various concerts, tours and festivals.

The biggest project being organized by Minna no Te is the Kodomotachi no Natsu no Yume events. The “Friend Reunion Project” will take place from July 28th to August 2nd. Fukushima children in Kyoto have invited their friends who are still living in Fukushima to visit them. At the time of writing eighty-two people have signed up to participate. Among the activities planned for them (and the children who invited them) is a trip to Hirakata Park, a tour of Ikkyu Temple, a craft workshop, a campfire, a magic show and a music performance. Due to radiation, playtime outside is restricted for many children in Fukushima and thus the project aims to give them a chance to enjoy the outdoors as much as possible.

The “Family Reunion Project” will take place from August 9th to August 17th. Minna no Te intends to reunite families that have been separated due to the nuclear crisis for a week by bringing some evacuees to Fukushima and also transporting Fukushima residents to Kyoto. At the time of writing, forty-seven evacuees have signed up to go to Fukushima by bus to visit family members, and ten Fukushima residents will travel to visit family living in Kyoto. Minna no Te has been collecting donations to fund these projects and are now close to reaching their goal of 3.5 million yen.

Yuko Nishiyama can be contacted at minnanotekyoto@gmail.com

This article in its entirety by Jason Bartashius.