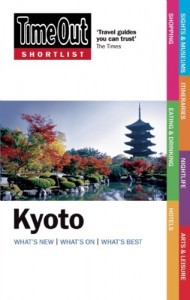 At the end of last month I asked ten of Deep Kyoto’s friends and contributors to give me their trickiest Kyoto-related trivia questions and posted them as a quiz. The quiz however proved to be impossibly hard (I’ll make it multiple choice next time)! As nobody was able to get all ten answers correctly I have awarded the prize (the handy pocket guidebook Time Out Shortlist Kyoto

) to the contestant with the highest number of correct answers: Mr. Gareth Evans of Hirakata City. Gareth managed a grand total of SEVEN correct answers, which for this quiz is quite an achievement! Gareth tells me “I worked at Kansai Time Out magazine as a designer/production staff back in 2001. Since then I’ve moved back to London with my wife (who is from Osaka) and now have a 2 year old son. I work as a designer/illustrator in the UK but spend at least 1 month of the year in Japan. Still do the occasional freelance design job in Japan when I can, too.” Here below are the answers:

1. John Dougill is from the UK. He is professor of British Studies at Kyoto’s Ryukoku University and the author of Kyoto: A Cultural History

A pregnant woman was burnt at the stake in Kyoto in 1619 for being a Christian. A small plaque marks the site. Where is it?

And here I believe is the site. The inscription reads “Genna kurishitan junkyou no chi” or “This is the spot of a Genna era Christian matyrdom”. The Genna era lasted from July 1615 to February 1624, and during this period the Tokugawa shogunate sharply increased their persecution of Japanese Christians.

2. Ted Taylor is from the U.S.A. He is a yoga teacher and the writer of the blog Notes from the ‘Nog. He has also published online the only English guide to the Kansai section of the Tōkai Shizen Hodō. Ted asks,

Who meditated and was enlightened on that big stone inside Manreidō? (万霊堂)

Hōnen (1133-1212) was a religious reformer and founder of  Japanese Pure Land Buddhism or Jōdo shū (浄土宗). His approach to Buddhism was one that anyone could follow; simply recite the nembutsu and call on the intercession of Amida Buddha with all your heart and you will be saved! It is impossible to underestimate this man’s influence on Japanese culture as the Pure Land and True Pure Buddhist sects are the most widely adhered to in Japan today.

3. Stewart Wachs is from the U.S.A. He is a professor of British and American Studies at Kyoto University of Foreign Studies, a photographer, a writer and an associate editor of Kyoto Journal. His question:

Which temple is located at the foot of Mount Zenki?

Founded on the site where Hōnen and his followers trained,  Hōnen-in is a beautiful temple nestled in the eastern hills of Kyoto that regularly hosts art exhibitions. Read more about it here.

4. Mewby is originally from Nara prefecture in Japan. She is a motorcycle enthusiast and Deep Kyoto‘s resident princess. Mewby says,

The “Ikedaya Incident” is the name given to a famous victory of the pro-shogunate Shinsengumi over the anti-shogunate Shishi on July 8th 1864. The battle occurred at the Ikeda Inn. What is the business of the “Ikedaya” that now stands at this site?

Answer: Formerly a pachinko parlour it is now an izakaya style Shinsengumi-themed restaurant.

5. Bridget Scott is from the U.K. She is a shiatsu therapist, English teacher and dancer. Bridget asks,

What is the endangered, protected species that can be found in the Kamo river and can grow to over a metre in length?

Answer: A Japanese Giant Salamander. Bridget says, “I’ve seen one over a metre long with my very eyes!”

6. Roger Walch is from Switzerland. He is a film-maker, photographer, jazz pianist, interpreter, and guide. You can read about his movie Children of Water here. Roger asks,

Where is the only gay movie-theatre in Kyoto located?

7. Sean Roe was born in the UK but raised in South Africa. He lists his occupations as “artist, musician, curator, concert promoter, record collector/seller and English teacher”! Sean asks,

When architect Yamada Mamoru was designing Kyoto Tower, what was his inspiration?

Answer: A lot of people though this was a candle but actually it’s a lighthouse! The architect saw the roof tiles of the houses and buildings surrounding the tower as waves.

8. Nicholas Coldicott is from the U.K. He is a writer, editor and the author of Time Out Shortlist Kyoto (read review here). Nick’s question:

What’s the name of the designer capsule hotel by Fumie Shibata that opened late last year on Teramachi?

9. Mitsu Salmon is from the U.S. She is a teacher, dancer, performer and organizer of International Love Cabaret. Mitsu asks:

What is the name of the bar in Kyoto that sells absinthe and is lit only by candles?

Answer: It has no name so people call it “no name bar” or “Kaz’s bar”. Mitsu says, “That is the beauty of the bar;it has no name, no website and its hard to find! People know purely by word of mouth. 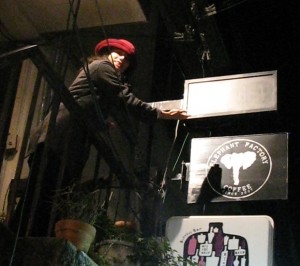 It’s right above the elephant bar. To get to the bar with no name you walk south to north on kiyamachi, make a left before the school/art center and the building is on the left. Top floor.”

Basically this question was impossible to answer unless you happen to be a friend of Mitsu’s!!! Not liking to be *out-deeped* I got her to show me where the bar is and here she is pointing out the bar sign that has nothing written on it.

This final question was admittedly pretty evil, so I’m not surprised nobody got it!

10. Felicity Greenland is from the U.K. She is a teacher, musician and singer of traditional British and Irish music. Felicity asks,

Answer: Fukusuke on the cover of Sergeant Pepper’s Lonely 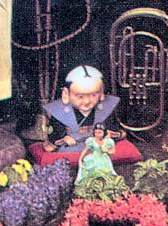 I bet you never noticed this little fella on the bottom left of the cover, did you? The Fukusuke doll is supposedly based on an Edo era Kyoto merchant who was very successful in business and so this doll is said to bring good luck and monetary fortune. Seems to have worked out all right for the fab four anyway…

And that brings our quiz to an end. Many thanks to all who sent in entries, to Nick Coldicott for supplying the prize and to all the contributors!