Velvet Moon is an ongoing music, dance and performance event that our friend Ryotaro Sudo began to organize 20 years ago. Originally held at Club Metro before finding a brief home at Cafe Independants, it is now held regularly at Urbanguild. Ryotaro describes this event as an opportunity for artists who might not be able to fill a full show by themselves to flex their creative muscles and freely experiment. Says Ryotaro, “Sometimes the results are not so good. Sometimes they are bad, or very bad. But sometimes… miracles happen.” 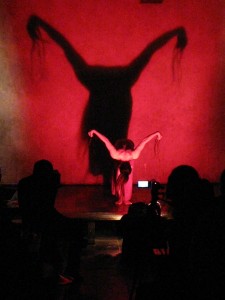 Last Thursday I attended Velvet Moon Vol. 53. Altogether I saw four different acts encompassing a range of experimental music, dance, performance, live painting, body art and partial nudity. That’s not a bad deal for 2000 yen! It would be worth it just to see Mr. Fryman’s trumpet playing alone! And I should also mention that the entry fee includes the cost of a complimentary drink.

Here are some images from last Thursday followed by details of the next Velvet Moon event on the 16th.

First up were Urbanguild regulars Christopher Fryman on trumpet, and the dancer Misuzu, accompanied by drummer Komaki:

Then came the acts I was unfamiliar with…

And finally KALIYAQEN whose key members are the artist Liqen from Galicia and Japanese musician Kayaka:

Velvet Moon Vol. 54 will be held on Wednesday May 16th and features music, dance and performance from: