Here’s a special guest post from our good friend, Edward J. Taylor; taking a stroll through the multi-leveled history of Kyoto’s “Oil Alley”.

Around the time that we were preparing our Deep Kyoto Walks project, I mentioned to Michael that I thought that a lot of Kyoto’s history could be read in the names of its streets. I proposed then that I thought it would be interesting to walk some of them, and see how much of that history remains. But not necessarily stop there, and note too the newer landmarks that keep those places interesting. 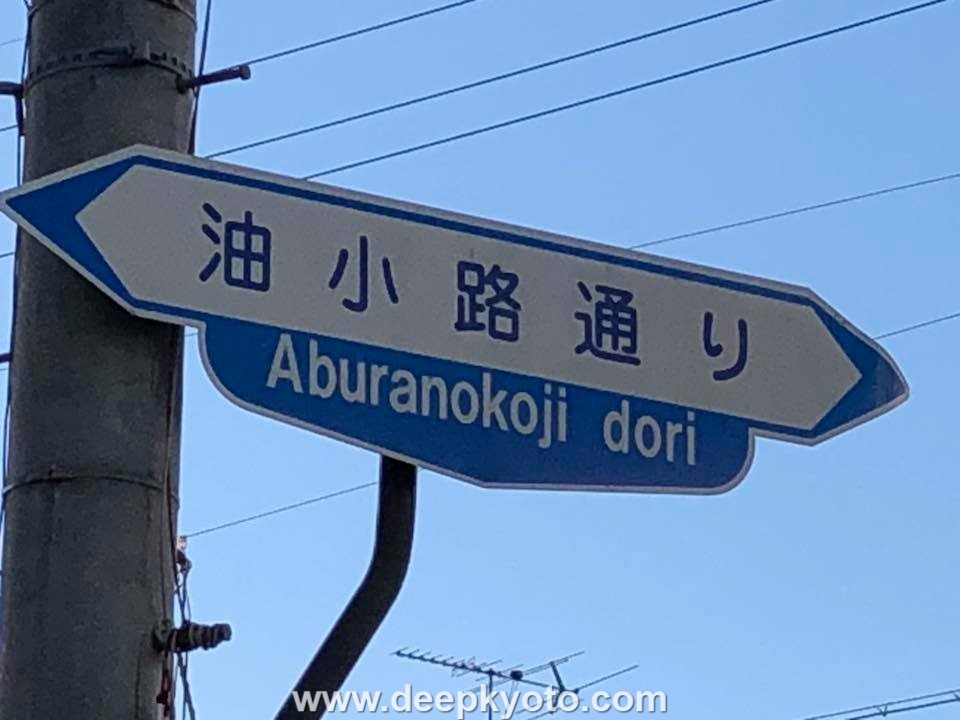 The most obvious place to start was of course the bizarrely named “Aburanokōji,” roughly translated as “Oil Alley.” The name comes from the fact that oil peddlers used to traverse it as they brought their wares into the city from the south. I too start from the Kyoto southern reaches, not far from Kami Toba Station. While the road actually leads from further out of the city, it is covered by the Hanshin No. 8 Expressway, which has little appeal. Nor really does this initial stretch, which takes me past a series of factories that recycle scrap metal, the clanging within deafening. The road here is wide and heavily trafficked, though shaded by a pleasant row of gingkos which in autumn, must offset nicely the shiny white cube of the adjacent Nintendo Headquarters. South Kyoto is home to Japan’s IT industry, and this former purveyor of playing cards made the shift in the 1970s to designing the games that made it a household name. 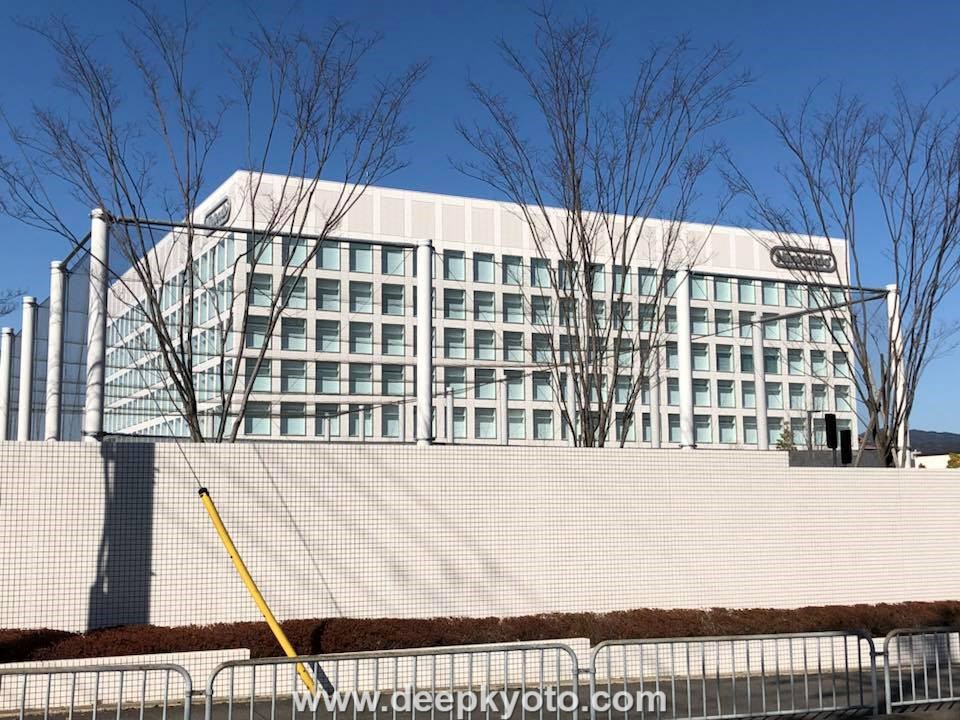 I go up and over one of those pedestrian flyovers that squat upon the intersection like an albino spider. I think that if more tourists saw this southern part of town, Kyoto’s high ranking as a travel destination would rapidly plummet. Of more appeal is Tōji-michi, which leads people to the well-loved temple just west. On one corner is a large satellite shrine for Fushimi Inari Taisha, and on the other is the expansive Aeon Mall, both competing for the offerings of visitors.

This thicker trunk of Aburanokoji that I’ve been walking becomes Horikawa-dori somewhere beneath the snarl of train lines jutting from Kyoto station. The truer route narrows and runs a slight diagonal to the east, becoming now a quiet lane paved in faux brick. The contrast is immediate. In hindsight, I should have begun the walk here.

I could ponder that thought at Kurasu Kyoto, a tachi-nomi place where the customers enjoy coffee served in bright ceramic cups, as they stand within the shop’s simple interior. Instead I carry on slightly to the Dōsojin Shrine up the lane. Dōsojin are the deities of borders, which makes sense since the Rashomon gate a few blocks west marked the southern edge of the old capital upon its founding in 794.

The next stretch beyond Shiokoji (Salt Alley) is the most historically resonant. Nearly immediately one comes to a small temple on whose confined grounds is the grave of Itō Kashitarō. Once a member of the Shogunate police force Shisengumi, Itō broke off to form a splinter group whose political goals were at odds with his former colleagues. They assassinated him as he strolled up Aburanokōji after a night of heavy drinking. 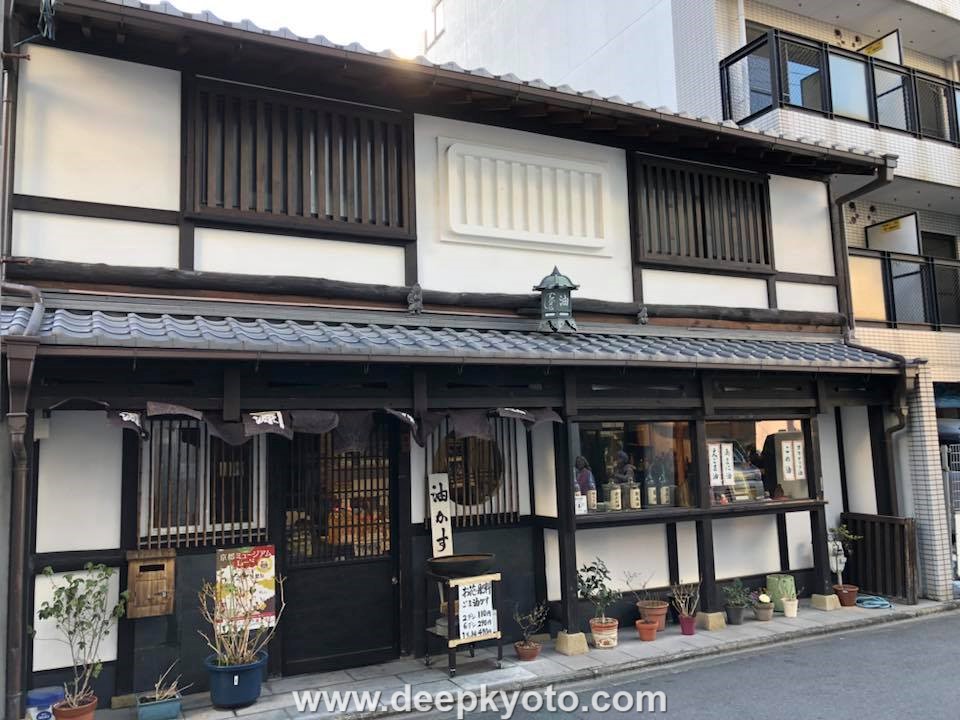 Itō’s death throes may have been witnessed by the owners of the Nishikawa oil shop just up the street, the sole remaining oil seller on Aburanokōji. Founded in 1835, this shop once pressed and produced oil for various uses, but since the coming of electricity in the Taisho period, Nishikawa now simply sells a variety of oils for cooking. A stop is recommended, as the shop is filled with memorabilia from its earlier days, namely oil presses, various tools related to its transport, and even a large oil drum from a late 19th century American Naval Ship. 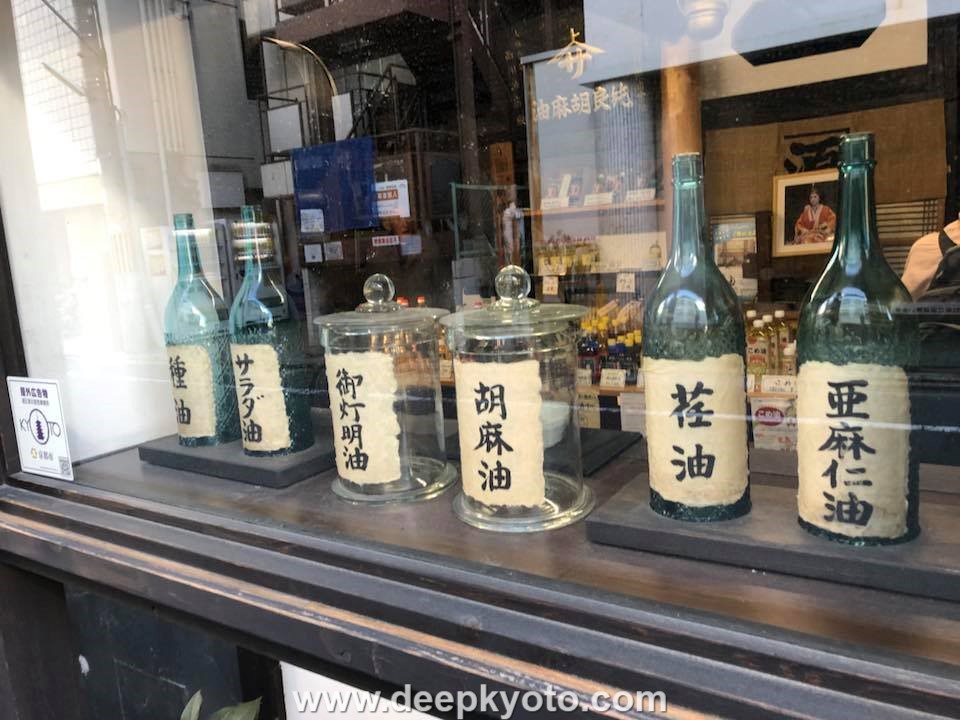 Over Shichijo Dōri, and my path begins to get even more interesting. Nishi Hongan-ji Temple complex is one street over to the west, and its massive form looms for nearly four blocks. The traditions of Aburanokōji are most alive here, namely in the form of shops selling Buddhist altars, statuary, and other elements of the funerary trade. Upon the conclusion of the Warring States Period in the early 1600’s, tradesmen who had until then earned their living making armor for the warrior class shifted their intricate attention to detail into making altars, which are works of art themselves. Another shop specializes in the elaborately patterned fabric that backs kakejiku hanging scrolls.

An array of even greater Buddhist artworks can be found in the Ryukoku Museum, its artifacts spanning the expansion of Buddhism from India to Japan. The heart of this is the Otani Collection, encompassing wide range of pieces collected by the 22nd head priest of Honganji during three major expeditions in the early 20th Century. 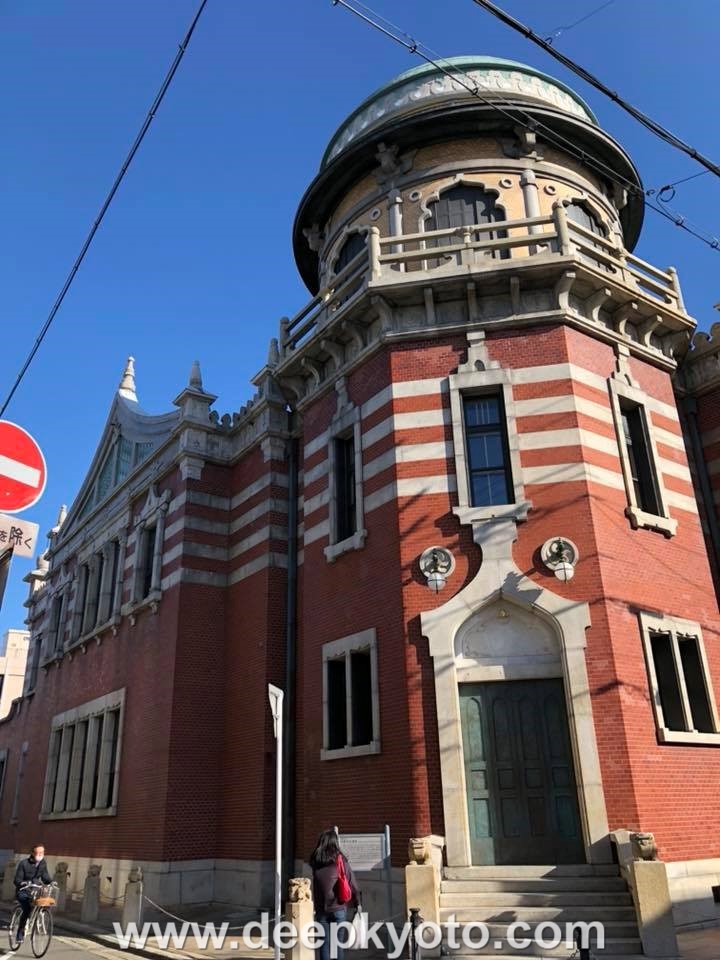 Of a similar generation is the Dentōin up on the corner, whose unusual shape never fails to catch the eye. Built in 1895, the building was once used as the Jodo Shin Buddhist missionary research institute. The clean lines of red brick are a far cry from the traditional dark wood of typical Kyoto design. A number of the latter are lined up the next block. At the center is the Sakura Ryokan, who offer the visitor a number of “Japanese experiences.” On this particular Saturday, one can try sake tasting, or perhaps calligraphy, though a combination of the two could prove especially fun.

The oldest building on the block is the Bikoen tea shop. Founded in 1872, Bikoen attempts to live up to its name, the “Garden of Pleasing Elegance,” by offering a variety of opportunities to sample tea culture, be it a full-on tea ceremony, or merely to pop in and sample a steaming cup. I’m happy for this latter chance, if only for a slight reprieve from the chill wind, a lingering touch of winter that is at odds with the sunny, early spring day. As I warm my hands on the rough clay bowl, I speculate that the oil sellers would have done good business on a day like this.

Thus fortified, I make another short stop in the Kyoto Moyashi house. A former warehouse for growing seed malt for sake, the 120 year old structure has been renovated as an education and event space. The name Moyashi is a pun, as besides the plants that were once raised here, the word also means “to grow,” with the growth of the individual their current focus. During the previous half century, a large majority of traditional Kyoto houses were destroyed in the name of development, but in recent years they have begun to be adapted into spaces like this. A welcome and progressive means of allowing Kyotoites to reinvent their traditions and align them with the contemporary needs of the community.

Nishi Hongan-ji temple leaves off, but the Jizo statues continue. These are a pretty ubiquitous sight along the backstreets of Kyoto, but Aburanokōji seems to have more than usual, which bespeaks a culture of movement. Today that movement is predominantly upward. Beyond Gojo-dōri, apartment blocks begin to take over, narrow, but rising to six or eight stories. Beneath them, some older shops still linger. A tofu shop. A sweets seller. A pair of Meiji-era buildings housing a doctor’s office and an events center. An upmarket Sichuan restaurant adopted from an old machiya. Oldest of all is an old home on the corner, whose grounds once served as a herb garden and school run by Yamamoto Bōyō. A Confucian doctor who taught at the end of the feudal period, neither he nor his school survived to see Japan enter the modern age.

The Gion festival float Taishi-yama did survive however, and the guild that oversees it operates from a beautiful home of dark wood and elaborate trellis work, which dates from 1869. Another place connected with the Gion festival is the Kason Tenmangu shrine. Here, the resident deity, Sugawara Michizane, is tranferred to the Abura Tenjinyama float, named of course for Aburanokoji. Both floats can be seen during wending Kyoto’s narrow streets in mid-July.

As I stand on the corner of Shijo-dori, it dawns on me that just around the corner is Bungalow, Kyoto’s second oldest craft beer bar (the oldest being the beloved Tadg’s). Never one to pass up a good beer, I make a brief detour, then return to Aburanokoji as the day begins to lean into evening. The real history is behind me, but a few traces remain.

Perhaps the most important comes first, as it altered the course of Japanese history. In June 1582, Oda Nobunaga, the first of Japan’s great unifiers, was surrounded at Honnō-ji temple in an attempted coup. Seeing the futility of the situation, Oda’s page and lover Ranmaru set fire to the temple, to allow them time to commit ritual suicide. (Honnō-ji has since been rebuilt, but now stands a kilometer or so east, at the head of the Teramachi shopping arcade.)

History behind us, things begin to get a little funky. There are a handful of little eateries, with some odd themes. A couple of places, housed in the most traditional buildings, have a subdued look, with just a name and no other information. These would appear to be strictly ichigensan, or introduction only. By contrast, Monk Bar has a welcoming English sign, which promises good wine and craft beer.

Oike next. Japanese tradition and French bistro compete for diners on two adjacent corners. Over the boulevard is the Kyoto headquarters for the LDP. (I’m tempted to comment here, but I promised the editor that I’d keep politics out of these pieces, so will refrain from making any comments about snake oil salesmen.) Behind is the rear entrance to the ANA Hotel, which does a nice lunch buffet, enjoyed with views out the front over Nijo Castle.

Up at Marutamachi is a shop that specializes in old dolls. As we’ve just passed Girl’s Day on March 3rd, the shop keepers would have been particularly busy. The next shop on the right won’t get busy for three months, when rainy season draws customers in to buy their umbrellas both modern and handmade traditional. Beyond these shops, things get more residential. Perhaps the people that live along here are customers of the incongruous Portuguese tile shop, or the Ladies French tailor. Or maybe they take a meal at one of my favorite restaurants, You, near the crossroads of Shimo Chojamachi. In winter You serves up some incredibly nice oysters, washed down with beer from Baird, one of Japan’s top craft breweries.

The last big street I’ll cross is Imadegawa. On the northwest corner is Shiramine Jinja, which hosts an entertaining martial arts event on Children’s Day, May 5. While the bigger event at Shimogamo Jinja on May 3 is a larger draw (especially due to the horseback archery), this one is much quieter, more intimate, allowing you a closer look at the techniques of some of Japan’s oldest martial arts schools.

The last few blocks now. The road narrows, the houses grow more modern. Then Aburanokoji trickles to a definitive halt. For those who feel the need to rinse off, there is an old-timey public bathhouse a few houses to the right. At the back of the building are dozens of squared beams that had once supported now defunct machiya, stacked neatly as cordwood. An ironic end I suppose, to a walk intended to trace the passage of a completely different heat source.