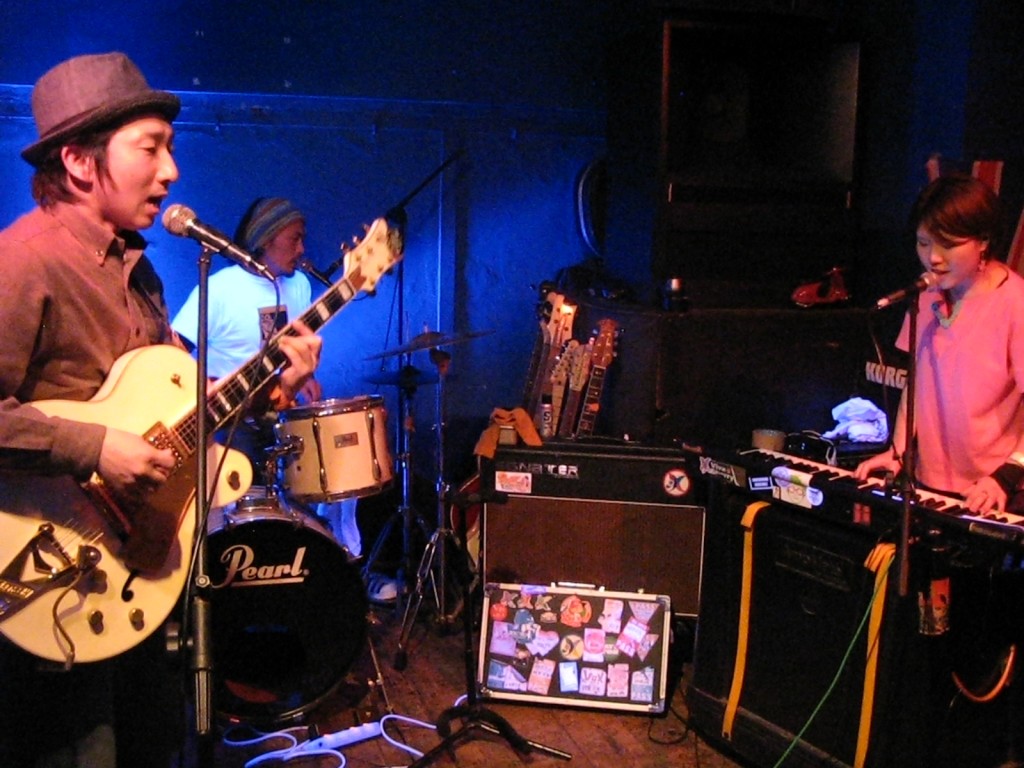 On Tuesday night Gary Bloom and I paid a visit to the Weller’s Club to check out Aya Oto World’s free show with DJ Takanori Hirano. It’s been just over a year since I last saw Aya Oto World play at club Collage, and since then they have slimmed down from a five piece big band to a trio, but to tell you the truth – as a group they have actually gotten better. The interaction between Yamamoto “Fresh” Kohta on guitar, Okuda Satoko on keyboards and Kawamoto Teruhiko on drums is much tighter than before, and the music is kicking! How to define their music is a little tricky though; is it rock, electro, ambient? Even “Fresh”, the guitarist, admits it is a little hard to pin down as the genre of the music tends to change as each soaring ten minute epic tune progresses. But basically they are a jam band, they are fun, and they make you want to dance. Gary and I had a great time during the band’s sets and enjoyed chatting with the band members between sets too while DJ Hirano (of Bootsy’s Records) played some ambient dance tracks. They are certainly a friendly bunch of characters! Here are three tunes from their second set of the evening. Details of their regular show at the Weller’s Club and of upcoming events they will play at Urbanguild are listed below.

Aya Oto World play a FREE show with DJ Takanori Hirano at the Weller’s Club on the first Tuesday of every month. The next show is on May 1st from 8pm. To find The Weller’s Club head west on Takoyakushi Dori from Kawaramachi. The Weller’s Club is on the north side of the street on the 5th floor between Fuyacho Dori and Tominokoji Dori. Look for the swirly purple Weller’s sign. Here’s a map.

In addition Aya Oto World have two events coming up at Urbanguild on Kiyamachi.

Further details to be announced on the Aya Oto World Website. Check out their myspace page also to listen to more tracks.

For advance tickets or other information, email: aya0t0w0rld@yahoo.co.jp