One of the big events I attended while I was (interminably) offline was *La Mano Fria’s Beer Tour Party* at Cafe Barbatica on July 19th. La Mano Fria is a designer, artist, performer, record label owner and (most importantly) amateur brewer who came all the way from Miami just to share his many splendid talents with us. I was very happy to meet him.

Though son of Costa Rican & Colombian immigrants La Mano Fria grew up in Queens, New York, an Irish neighborhood, and so as a youngster he was surrounded by lovely Irish people. And they gave him his love of beer (aren’t Irish people great?). Anyway, this beer he made at a brewery in Ibaraki called Kiuchi. Anyone can go there and make their own beer it seems. Sounds like fun doesn’t it? And his beer was good too. I think I want to give it a try. And indeed I shall, for here I have found some details… But I digress.

The party continued and our man LMF entertained us with some live painting.

Actually it wasn’t really painting so much as sticking bits of coloured paper onto a projected image and I thought at first it was going to be pretty lame.

But then he comes over and he says “Hey, why don’t you have a go”.

And he says, “Come on…” and hands me some tape.

And I says, “But where should I stick it?”

To which I respond, “But er… what kind of image are you aiming for here?” 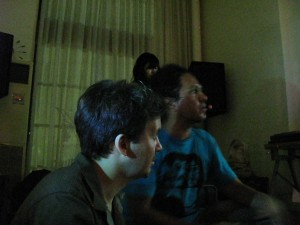 So I gingerly stuck a piece on… and suddenly everybody wanted to have a go. 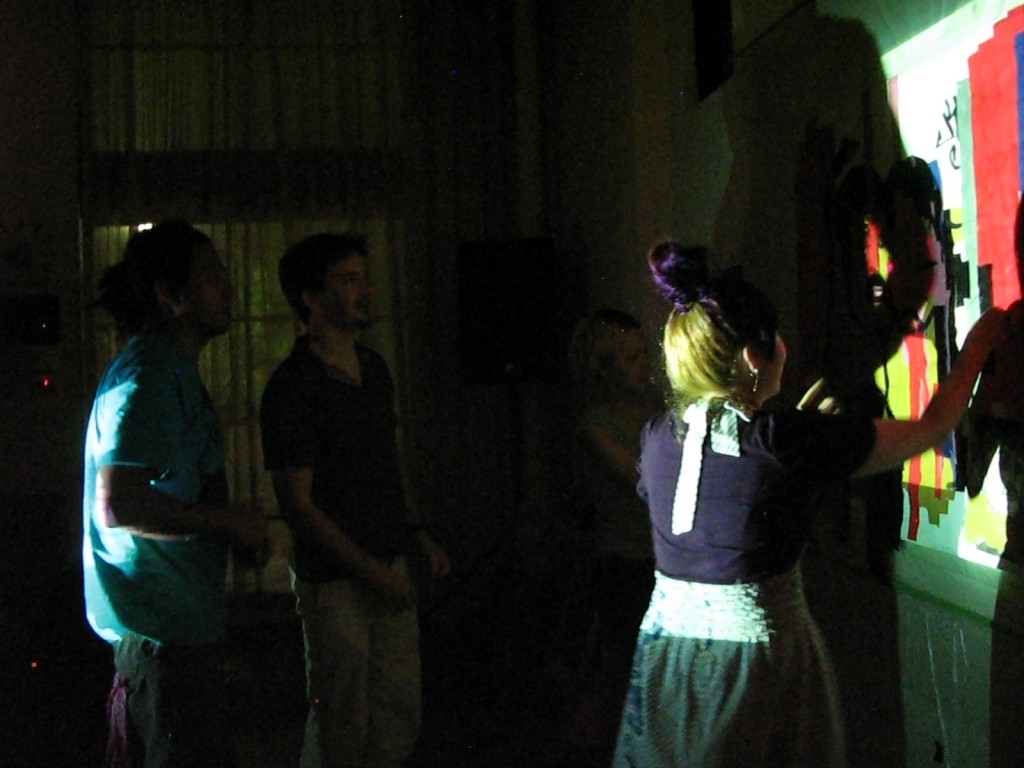 I had to stand aside before a mad flurry of people all sticking bits of tape on the wall and scribbling things. 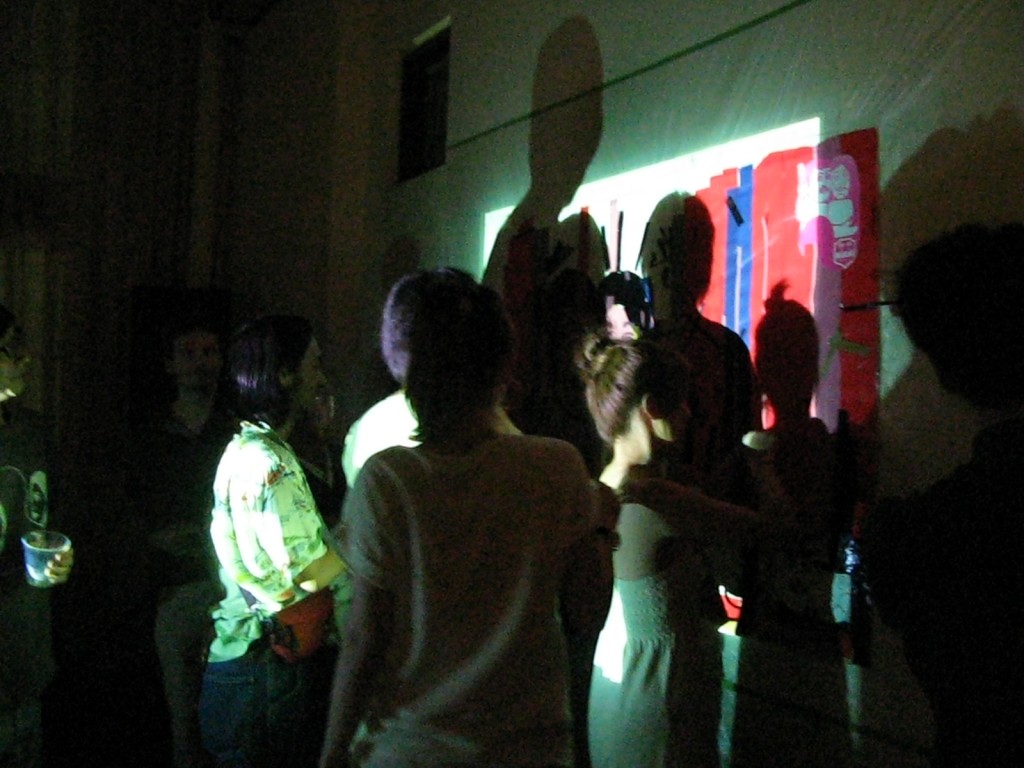 Some people even started sticking things on each other. 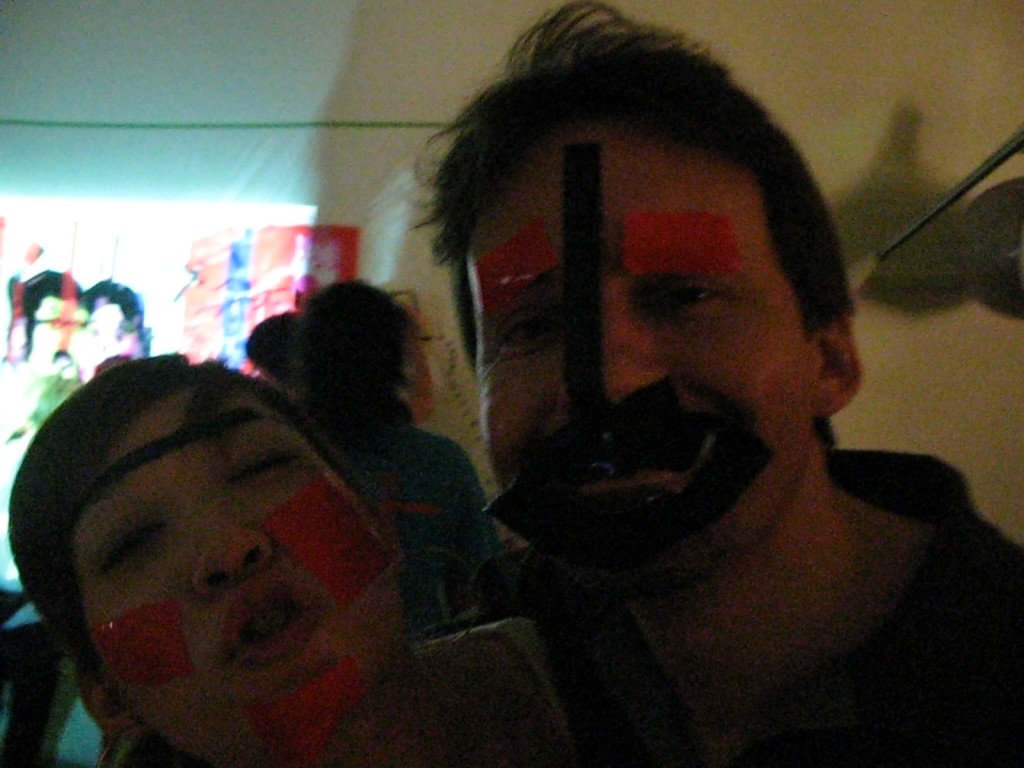 Others indulged in gratuitous self promotion. 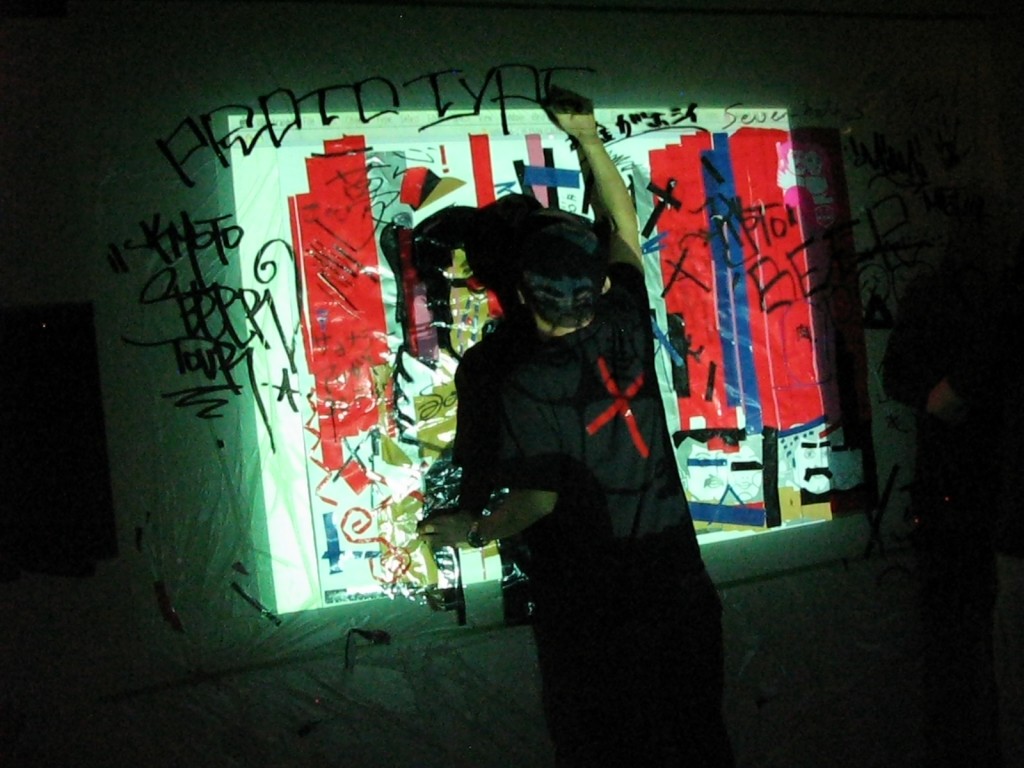 And this was the finished work.

In addition to art/fun there were also four different bands. 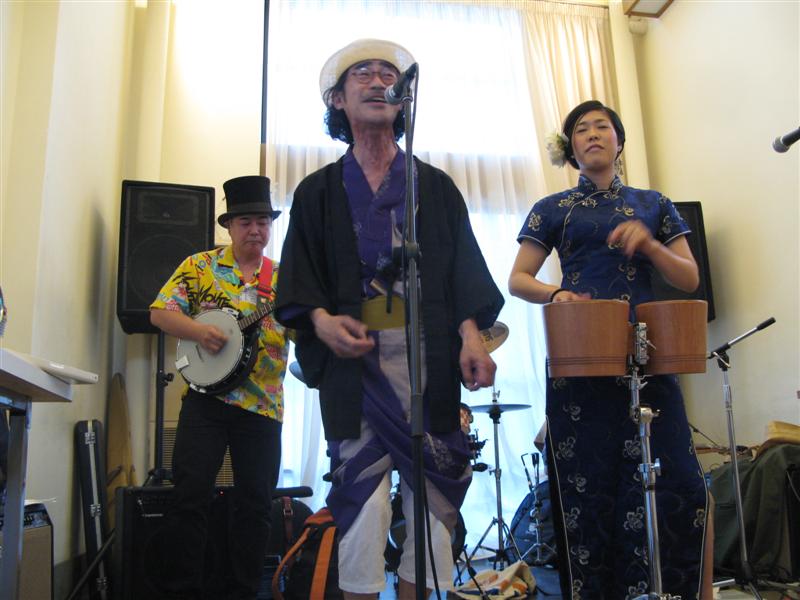 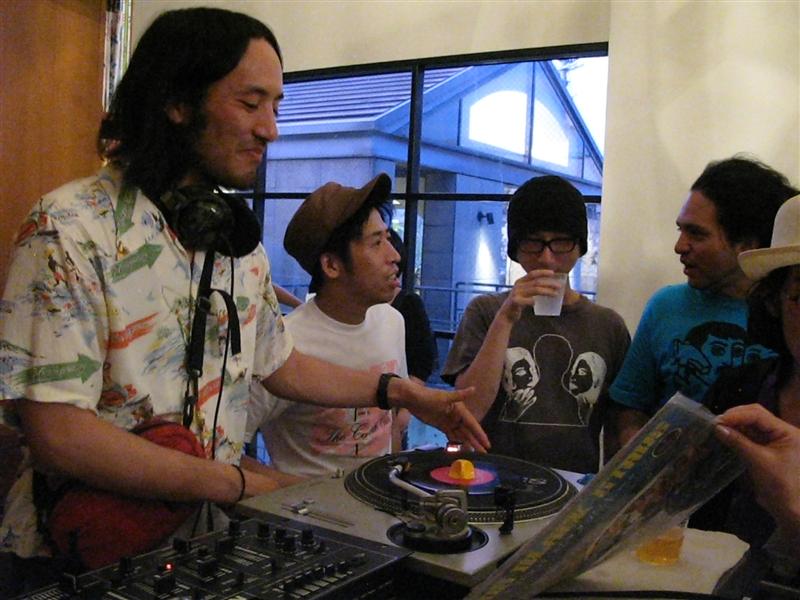 And everybody had a very nice time. 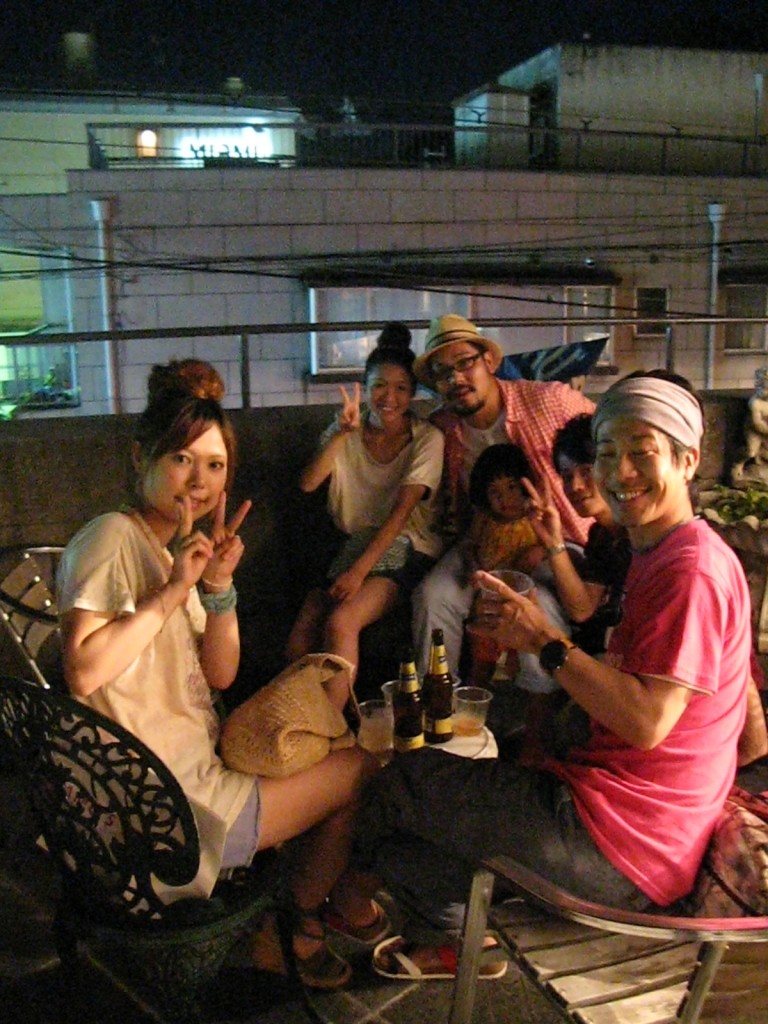 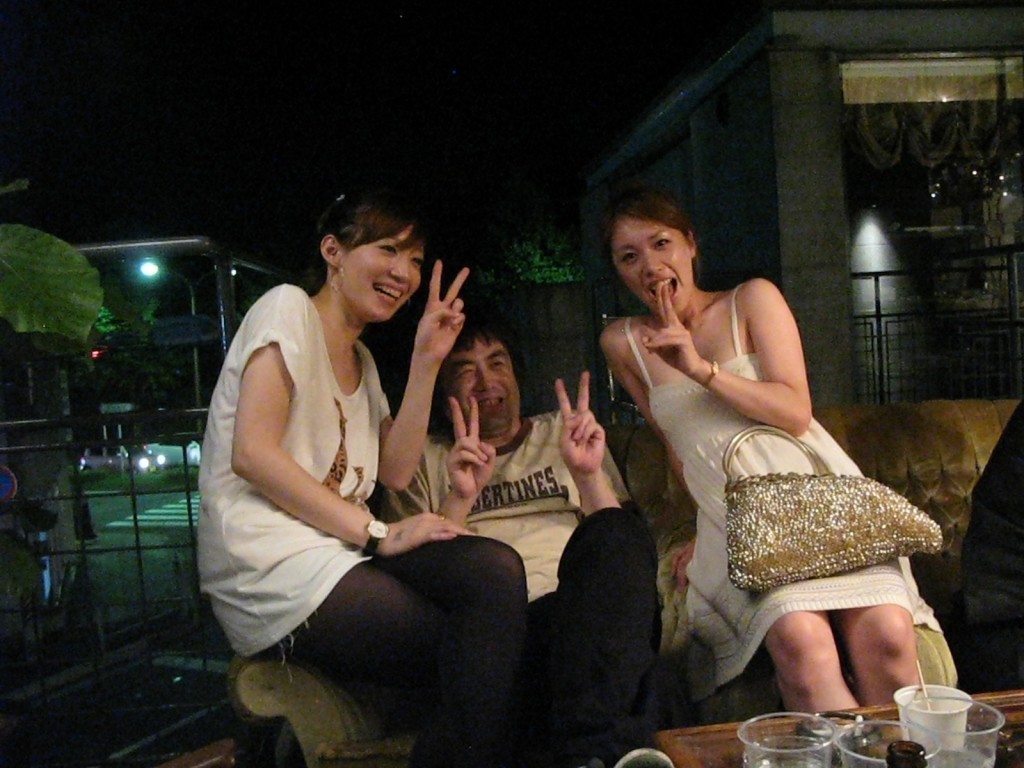 He had a very nice time indeed.

You can see the full slideshow on flickr here.

But now for your delectation and delight here are some previously unposted videos of the headliner Bluesband that played at the party (#1 was posted here). Enjoy!