Last Friday I attended the Kyoto premiere of Roger Walch‘s new movie “Children of Water” at Jittoku. The venue was a legendary live house in Kyoto (Japan’s oldest in fact) that has been open since 1973. Like the equally famous TakuTaku the building is a converted saka-gura – a kind of traditional sake warehouse. This was my first time to visit this fine old venue.

Folk rock funsters Morphic Jukebox have a couple of songs in the movie’s soundtrack, so they performed a live set before the movie was shown. I’ve put some videos of their performance at the end of this post. 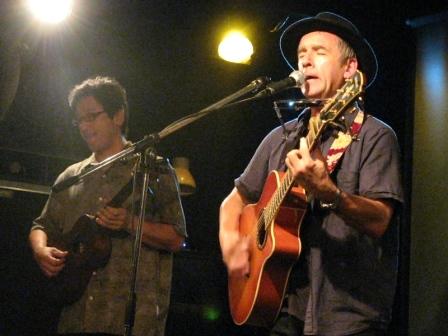 Roger’s movie was an interesting and moving story about different and sometimes clashing cultural attitudes towards child-rearing, and abortion as they play out in a particular cross-cultural relationship.

Lili Sakamoto as the female lead, gave a very impressive performance indeed. At times it was hard to believe she wasn’t a professional actress but was simply roped in to the project because she is Roger’s wife! Of course the movie wasn’t without it’s flaws. I found some of the character motivation towards the end of the movie a little unclear and thought it needed fleshing out. And the cultural references to kokeshi dolls and jizo statues though interesting, felt slightly forced within the context. I wondered why Lili would even mention those things knowing how her boyfriend felt… However, overall it is a fine achievement, beautifully filmed and amazing when you consider the whole thing was made in five days and cost only 50,000 yen to produce! The next showing will be on November 26th at Kyoto International Community House (in an event also featuring short films by Alessandro Mavilio) and I recommend you check it out. It’s only 1,000 yen this time and you will certainly be surprised by the movie’s resolution!
Time: 7:00 – 8:30 pm (doors open at 6:30pm)
Location: Kyoto International Community House (6 min from Subway Keage station)

Now, here as promised are those videos of Morphic Jukebox at live house Jittoku! The songs featured are Paul Brady’s “You’re the One”, and then original numbers: “Get Away!”, “Summer’s Over”, “Love Steer Me Through” and “Down by the Ocean”.