Though we didn’t quite get the crowds we had hoped for last weekend, we still managed to make a fair bit of money to help IDRO Japan continue its good work in northern Japan. Our combined takings for two days was 156,561 yen but we had a lot of stuff left over, some of which we took to a used clothing store and some to Bookoff. After Bookoff’s contribution our current total stands at 163,121 yen. However, we are still waiting to hear how much the used clothing store will give us, so the final grand total could be a wee bit higher yet.

The event itself was tiring but a lot of fun. It was as much a gathering as it was sale with lots of old friends popping in for a chat as well as a mooch around our shop. Also on Saturday from 3.30 onwards we had pretty much non-stop music. First Felicity Greenland held a jolly folk sing-along on the balcony (the weather was gorgeous): 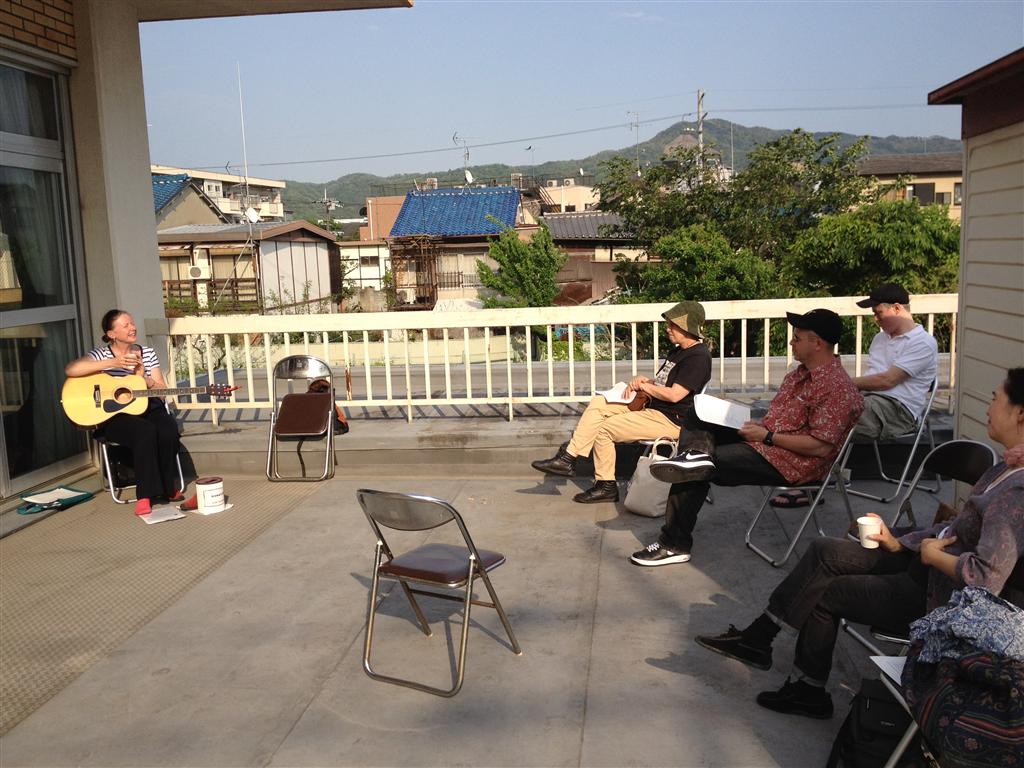 Next up, Jen Teeter sang along to Hiroyuki Tokuda’s guitar and regaled us with some fine old rock and pop classics: 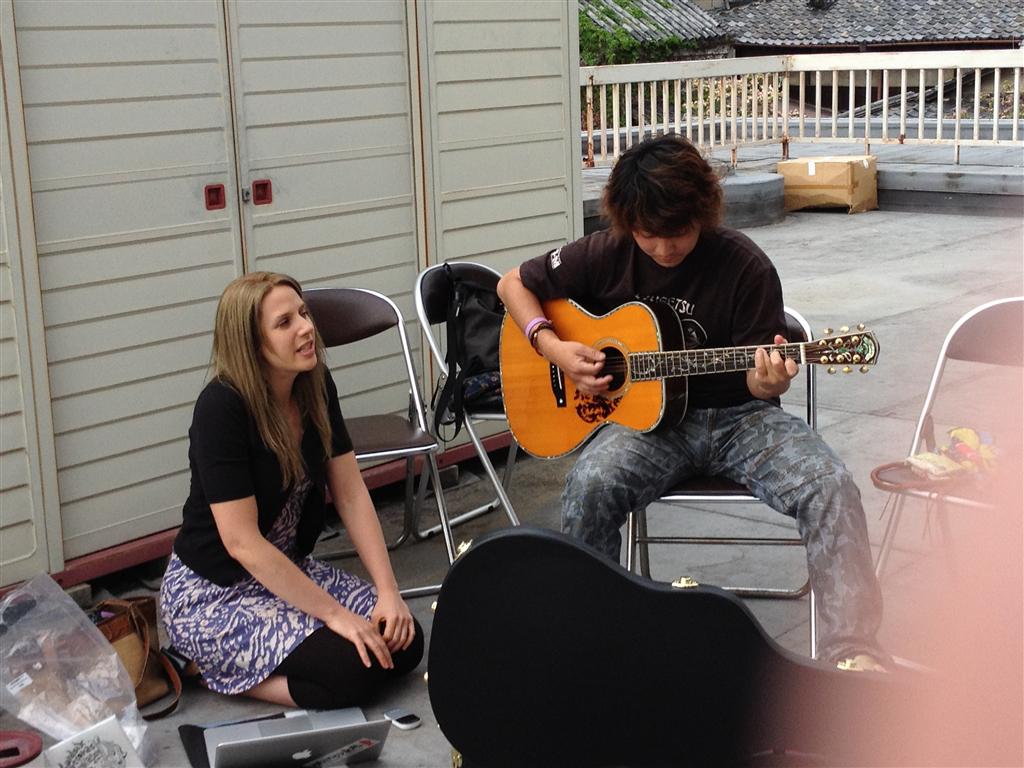 Then three magical tunes from my friends Choro Canário: 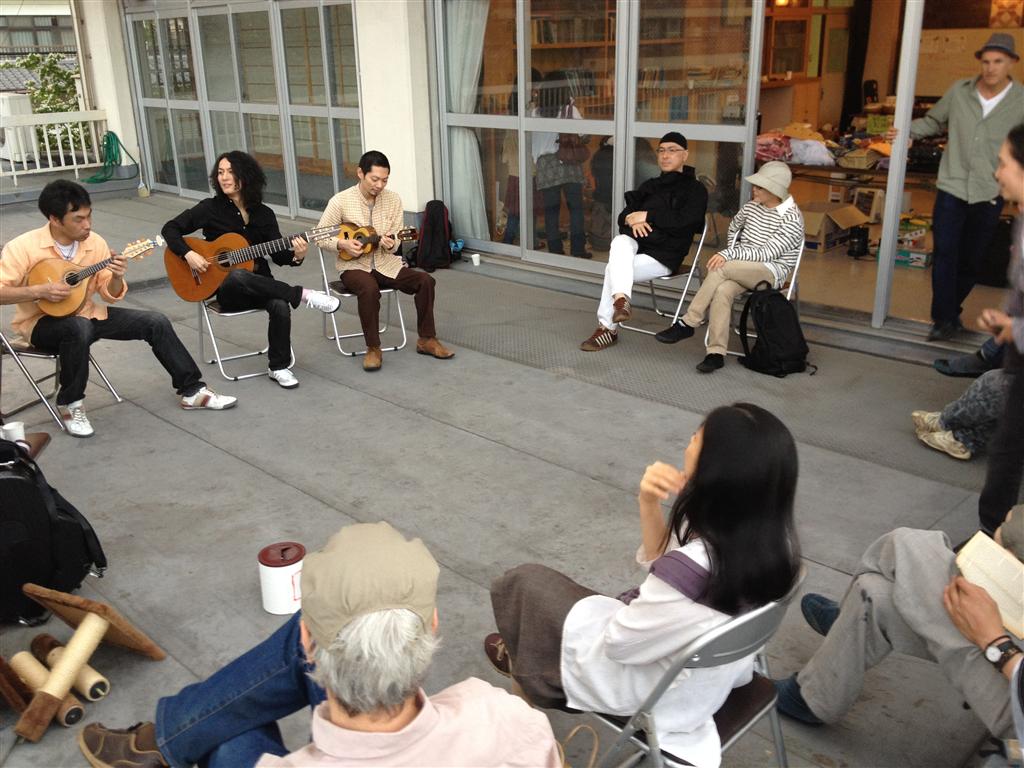 Max Dodds followed up with a selection of Canadian classics that had me and Mewby dancing and was accompanied by a rather dramatic light show of lightning strikes in the skies behind him as well as occasional harmonica riffs from Lawrence Barrow. 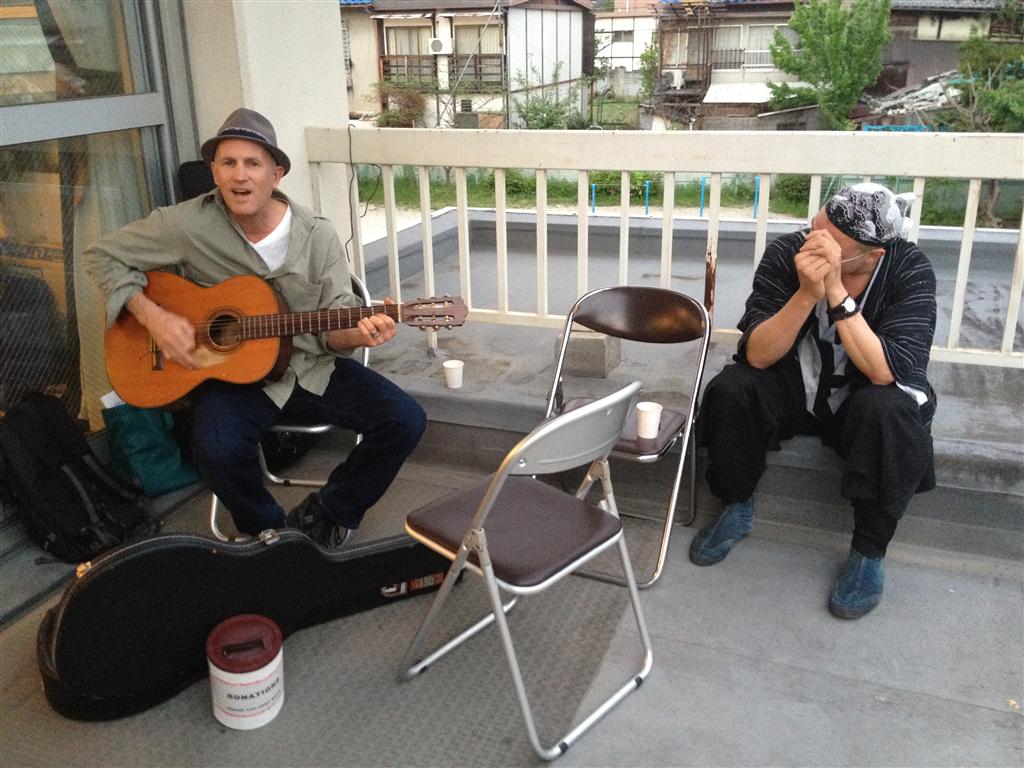 As the day darkened into evening our final musician, Ai (of Jet Pepper Tower and Chi to Bara) serenaded the ladies under a Super Moon with songs of dark romance: 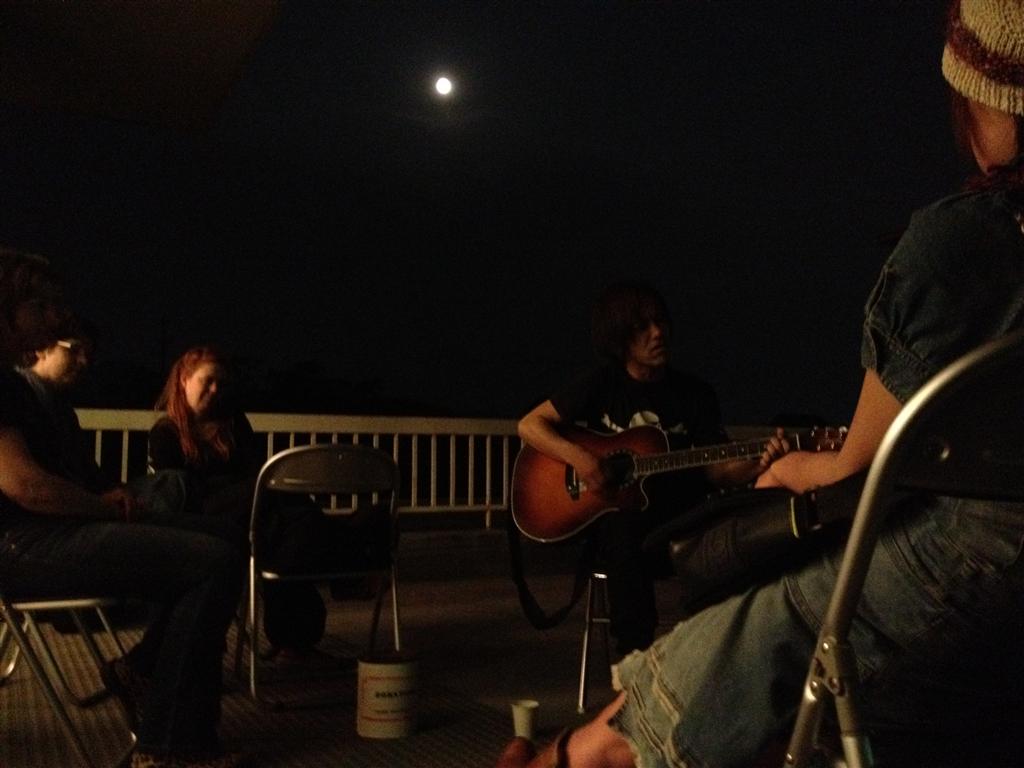 As always our key team organizers Sheila Campbell, Carolyn Wright, and my right-hand-girl Mewby proved to be invaluable, but thanks are due also to a heck of a lot of people who helped us out. I just hope I don’t miss anyone off the list! Please remind me if I do!

Hiroko Kawano was present throughout the sale selling goods, and also helped us A LOT previous to the sale translating and distributing publicity materials. Thank you Hiroko!

Thanks of course, are due to all who came and donated and bought goods but special thanks go to Russell Trott of Crossfit Kyoto and Ela Lua of bodhielements for the vouchers they gave us. Thanks to Kris Kondo for her accessories. And thanks (and apologies) to John Gorman who won the booby prize in the lucky dip!

A lot of people were very generous in paying more than we asked them for and telling us to keep the change (especially Felicity). A big thanks also to the gentleman who donated 20,000 yen when I was out at lunch. I think I know who that was but suspect he prefers it to be an anonymous gesture so will  keep his secret for him…

Also many thanks to  the cooks! Cookies and bacon proved to be the hottest items at our sale! Many thanks indeed, to Mewby for her banana coffee cookies, to Kelton Boyer for the big box of assorted cookies he sent all the way from Nagano (these disappeared real quick!), to Liz Maly for her fantastic chocolate brownies, to Kevin and Takako Ramsden for their lovely cookies and fruit loaf, and to Tadg McLoughlin for his super popular smoked bacon!

Most of all though thanks to all the volunteers who came along and helped us out!

Also a big thanks to Dan Douglas for helping us get all the stuff in on Saturday morning, and again to Barbara Stein and Shaheed Rupani for taking the clothes to the used clothing store on Sunday evening! That was a big help!

Thanks also to the staff of the 左京西部いきいき市民活動センター (Sakyou Nishibu Iki-iki Shimin Katsudou Center). They were very helpful and friendly and at 100 yen an hour for such a good location it’s an excellent event space!

Finally, thanks again to Sheila, Carolyn and Mewby for being there throughout and making it all possible but especially to Sheila who has been storing a big pile of donated goods for so long! A very big otsukaresama your way!

Once I have the final monies collected I shall meet up with Rob Mangold to hand over the cash and report back to you all on how he plans to invest it in Tohoku’s future! In the meantime if you haven’t already, please check out the following posts and familiarize yourselves with IDRO’s ongoing work up north:

Ten Days in Tohoku – a simple sketch of the things I saw, the projects I took part in and the people I met with IDRO Japan this March.

An Interview with Rob Mangold, the Founder of IDRO JAPAN