Irish music fans, of which there are more than a few in Kyoto, should take note. Irish musicians Niamh Ní Charra & Sean Whelan will be joining local duo, Hatao & Nami, for a show at Eiun-in on Sunday, November 9th. Details below! 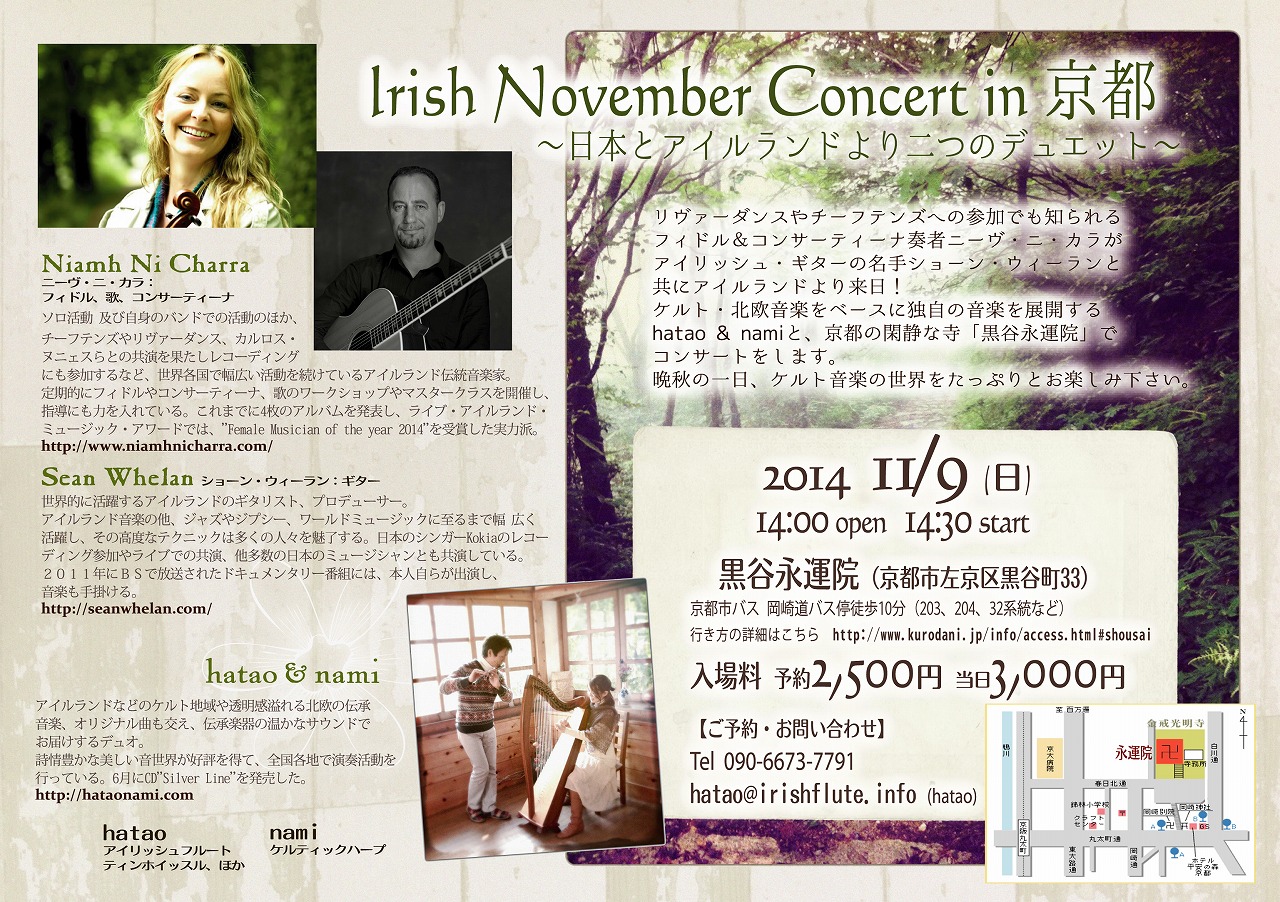 Niamh Ní Charra
Niamh Ní Charra hails from Killarney, County Kerry in the south west of Ireland. Strongly influenced by the wealth of local Sliabh Luachra musicians, she started playing music at the early age of 4, under the tutelage of renowned local musician Nicky McAuliffe. A multiple award winner on both fiddle and concertina, she toured from 1998 to 2006 as a soloist with Riverdance, before returning to Ireland where she is now based.
Most recently she was awarded “Female Musician of the Year 2014″ in the Live Ireland Music Awards, compiled by respected and renowned industry critic Bill Margeson. Her latest album “Cuz”, featuring many top class guest musicians, received great critical acclaim including “Instrumental Album of the Year” in the Chicago Irish American News’ TIR awards for 2014. Her music features on the programme “Ireland in Song” currently airing on Aer Lingus transatlantic flights, and which also featured on PBS.
Along with touring extensively as a solo artist and with her own band, Niamh has also performed and recorded with The Chieftains, and with Carlos Núñez. She has performed for several presidents and members of royalty and has additionally coordinated concerts hosted by the Irish embassy, on behalf of the government. Read more here: http://www.niamhnicharra.com/

Seán Whelan
Seán Whelan is a guitarist and producer working in the Celtic and World music arena who started playing guitar from the age of 9 and is now much in demand as both a studio and live musician. He has played guitar through a cross-section of styles from Celtic Music/ Jazz /Gypsy Swing/Classical/World music and has established himself as a forerunner in Acoustic music by the passion, creativity and versatility of his playing. In 2008 he also worked as musical director for Japanese singer/composer KOKIA for the release of her “Fairydance- KOKIA meets Ireland” album. In September of that year he performed sell-out shows with her and the members of Puck Fair in Tokyo. A former member of Irish Jazz group Hotfoot and having recorded on their debut album, Seán went on to tour with blues singer Mary Coughlan and also with Irish fiddle talent Máire Breatnach. He has recorded on two albums by Scottish singer Lorraine Jordan and has also featured on songwriter Sonny Condell’s acclaimed album “Someone to Dance with” and in 2006 recorded “The Kilworth Concert” with the Cafe Orchestra. Through his playing with ace Flautist Brian Dunning he has performed on “A Windham Hill Christmas 2” and Puck Fair “Forgotten Carnival” in 2008.
http://www.seanwhelan.com/

Hatao & Nami
Flutist Hatao and harpist/pianist Nami play traditional music rooted in the Celtic and Scandinavian traditions, as well as their own compositions.
http://hataonami.com/