…a line drawn by the brush produces a certain resonance. The moment by moment expression of the drawn line is like the intersection of the many resonances in a symphony. The living quality of calligraphy is precisely this. The resonance follows the time dimension, appearing and disappearing, changing—not simply repeating itself, but mastering the surface of the paper and the surrounding space. According to the resonance of the black inked path of the brush, the surrounding white space may be squeezed or enlarged, deeply interior or placidly peaceful. And from where does it arise, this resonance that shapes time and space?
– Yoko Nishina

Nagaeke Jūtaku will host a collaborative exhibition of calligraphy by Yoko Nishina mounted on scrolls by Liza Dalby on March 21st, 22nd and 23rd.  Liza has been mounting scrolls for four years and this will be her first public exhibit. She will give a talk (in Japanese) accompanied by slides on the culture of mounting hanging scrolls at 1:00 on each day that the exhibit continues.

Liza Dalby is an anthropologist and author specializing in Japanese culture. You can view a gallery of her previous scroll works here. About scrolls she writes, 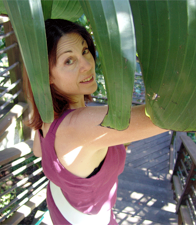 My eyes became attuned to hanging scrolls over the many years I spent in Japan when I was young. Of course I liked scrolls as art, but did not really notice them as scrolls until I lived in Hong Kong and saw many Chinese examples. Suddenly I became aware of the different aesthetic driving the way Chinese and Japanese mounters worked. Of course, like many now-thoroughly Japanese cultural artifacts, rollable scrolls were a Chinese invention, first imported into Japan and copied in the sixth century. But like many Chinese arts adopted into Japan, a new aesthetic gradually took hold, changing the original object in interesting ways. Japanese sensibilities really are quite different from Chinese, and a hanging scroll is the perfect object to illustrate many of them. In fact, the closer one looks at the elements of a scroll, and the more one knows about how it is created, a fascinating universe of cultural choices is revealed. There is something deeply reflective of Japanese social and aesthetic norms rolled up in these creations of paper and silk.
– Read more here.