This is the fourth and final glimpse into the up-coming Kyoto Journal #74 – “The Silk Roads” – due out this June!  Take a look at this gorgeous layout! 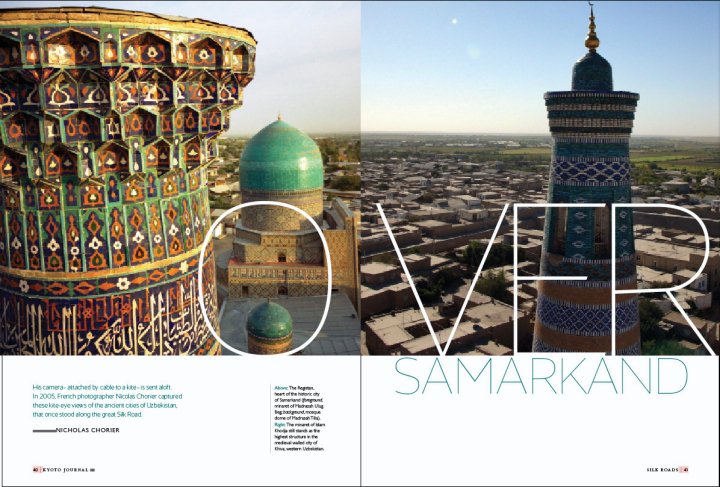 I can remember exactly where I was and what I was doing the moment I learned that the Taliban had blown up the Buddhist statues of Bamyan, in March 2001 ― sitting in the backseat of a car in Los Angeles, stopped at a traffic light. The radio news mentioned it, but conversation in the car continued ― I don’t think anyone else noticed or was even really listening…

Returning home from China in 1292 CE, Marco Polo arrives on the Coromandel Coast of India in a typical merchant ship with over sixty cabins and up to 300 crewmen. He enters the kingdom of the Tamil Pandyas near modern day Tanjore, where, according to custom, “the king and his barons and everyone else all sit on the earth.” He asks the king why they “do not seat themselves more honorably.” The king replies, “To sit on the earth is honorable enough, because we were made from the earth and to the earth we must return.” Marco Polo documented this episode in his famous book, The Travels, along with a rich social portrait of India that still resonates with us today…

On March 6, 1925, the Roerich Expedition led by mystic painter, occultist, alleged spy, Shambhalist, and all-around intriguer Nicholas Roerich left Darjeeling, India on what would be a three-year journey through Central Asia and Tibet, with stops in Kashmir in India, Xinjiang Province in China, the Russian Altai Mountains in Siberia, Ulaan Baatar and Amarbuyant Khiid in Mongolia, the Tibetan Plateau, and numerous places in between…

And much much more!