Here’s the latest guest post from our friend Jason Bartashius…

Before relocating to Kyoto, Ikuko Wagatsuma worked in the clothing department of a supermarket in Minami-Soma, a city devastated by both the tsunami and nuclear crisis. The tsunami wreaked havoc washing away homes and causing hundreds of deaths. Located near to the crippled Fukushima Daiichi nuclear power plant, parts of Minami-Soma were inside the initial 20km evacuation zone. Though this was lifted in the spring of 2012, Wagatsuma explains to me with tears in her eyes that radiation is still a concern. 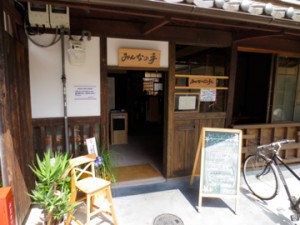 In Kyoto she is now working part-time at Minna no Café in Momoyama, Fushimi. The café is owned and managed by Minna no Te, a support group for 3.11 evacuees in Kyoto. Situated in a renovated machiya, a traditional Kyoto town house, the café employs evacuees and local Kyoto residents. It also hosts relaxation workshops, computer courses and health consultations for evacuees. “A representative from The France Foundation, who gave us funding, talked me into opening this place so we could give evacuees sustainable support,” said Minna no Te president, Yuko Nishiyama.

The café is tucked in a quiet street conveniently just a few minutes walk from the Keihan Fushimi-Momoyama station and the Otesuji shopping arcade. Though the area is slightly off the beaten path, a fair number of tourists visit the famed sake breweries as well as Fushimi Castle.

Bustling with a steady stream of customers, lunch-goers seem to appreciate the addition of the café to the neighborhood. Included on the menu are Fukushima specialties such as Ikaninjin, carrot and dried squid marinated with soy sauce and sake, which is a traditional dish in Fukushima. Zunda, another northern delicacy is served for dessert. Zunda is a rice flour dumpling topped with a paste made from grounded edamame and sugar.

In the old days land and water travel through Momoyama made the area a connecting point for Nara, Osaka and Kyoto. Similarly Minna no Café is functioning as a hub- connecting the people of Kyoto and beyond with those affected directly by the nuclear crisis.

“Many people come to eat and relax with friends. But also there are a lot of people who come because they want to connect to evacuees or me,” said Nishiyama. 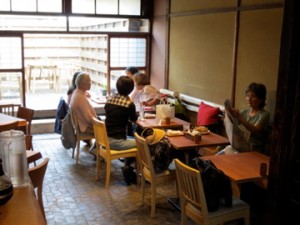 Soon after its grand opening in May, a group of students and professors from Saint Michael’s College in Vermont visited the café. The visit was part of the group’s two-week study abroad trip to Japan. At that time Minna no Café was usually closed on Sundays, but Nishiyama opened its doors so the students could come and learn about the realities of the ongoing nuclear crisis.

Lauren Gillick, a Saint Michael’s graduate who joined the group, was particularly impressed by Nishiyama’s presentation. Holding a Masters degree in TESOL, Gillick hopes to teach in Japan sometime in the near future. “It seems that the most we can do for Yuko-san’s organization is to help spread the word and make this issue more well-known to the rest of the world. As I enter new schools as a teacher for this year, I will make sure to do my best to see how I can make this issue better known to my students as I think awareness is key,”said Gillick.

Customers, undoubtedly, also have chances to learn about Minna no Te and some of the organization’s other projects. Information pamphlets are displayed in the genkan. One can also find T-shirts for sale in the entrance. The shirts are printed with a bus graphic and the words “Fukushima” and “Kyoto.” Sales will help fund the Yume no Natsu project to reunite classmates and families torn apart by the 3.11 catastrophes.

This summer vacation buses will shuttle affected people to and from Kyoto. Fukushima children will visit their classmates who have relocated to Kyoto. From August 3rd to the 8th, the children will spend time with friends at a summerhouse in Otsu City provided by Notre Dame Elementary School.

The buses will quickly gear back up to transport and reunite separated family members during the Obon holiday. Many families have been split up by the nuclear crisis. Mothers and children evacuated while fathers stayed behind to work. Though temporary housing is rent free, daily expenses quickly add up and travel costs to visit relatives are forbidding. Obon is a time when many Japanese return to their hometowns to spend time with family and visit ancestral graves. Minna no Te is working to afford Fukushima families a similar opportunity.

Unarguably, the crisis has disrupted and brought injury to many lives. The future for many evacuees remains uncertain. A contentious debate over the dangers of radiation rages on making it difficult for many to decide whether or not to return home. They are at a crossroads. And so is Japan, for it remains unclear as to what degree the country will continue to rely on nuclear energy.

Minna no Café welcomes, attracts and invites people to join in community action and discussion. Such places are needed to empower and unite people in community. 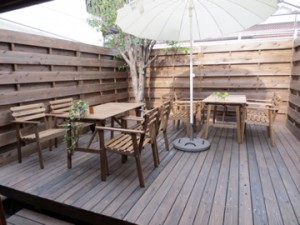 Access:
A 3 minute walk from Kintetsu Momoyama Goryomae or Keihan Fushimi-Momoyama. From either station walk WESTWARD on Otesuji Street, turn left at SoftBank onto Ryogaemachi Dori, walk straight again and you will see it on the left. Here is a map.