Our pal, Christopher Fryman, is hosting a series of New Directions events at Urbanguild these days, and has asked me to help spread the word about the next show on July 9th. As Christopher is a pal, and the list of performers does look rather good, and especially as this will be a NON-SMOKING EVENT (!!!) I am very happy to oblige.

Directions: To get to Urbanguild from Sanjo Dori, go down Kiyamachi Dori (This is the narrow street running alongside the Takase stream). Urbanguild is on the east side (the left hand side as you walk down from Sanjo) about 150 metres. It’s on the 3rd floor of the New Kyoto Building – access by elevator or stairs. Here is a MAP.

Christopher is particularly keen that people come to see Kyoto-based composer Hitomi Shimizu who will be playing a quarter tone keyboard that she made herself. Here are some more details…

Hitomi SHIMIZU is a composer for film and TV soundtracks and winner of the Japan Academy Award 2001 for the Japanese film “Waterboys”. Hitomi has studied music composition since the age of 14 and is especially intersted in micro tuning. After graduating from Toho Gakuen Conservatoire, she built herself a 43-tone microtuning organ and made frequent live performances with violinist Hiromi NISHIDA as a duo “SYZYGYS” in Tokyo. She plays “microtuning pop” which is Hitomi’s life work. “SYZYGYS” CDs are available worldwide, produced by John Zorn on his TZADIK label. For her solo works, she plays 205/octave microtonal keyboard called “Tonal Plexus 6s” as well as her self made 43 tone organ. 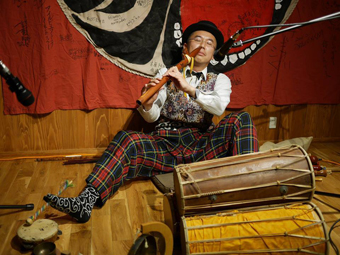 Takeshi Unate is an Asian style, one-man-band ‘pokopoko’ musician. He plays with body and spirit. His hands use many melodic instruments, singing with his mouth and nose, beating with his feet and an array of flutes, whistles and other rare instruments. 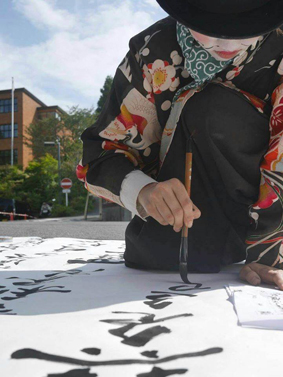 Yuko Nazuna is a shodo (Japanese calligraphy) artist. She has performed live calligraphy at shrines and temples in Nara.

SIETE PASSOS PARA EL CIELO are an esoteric free style band playing a beginning, middle, and end. Their influences range from Mahler to Mingus. They are 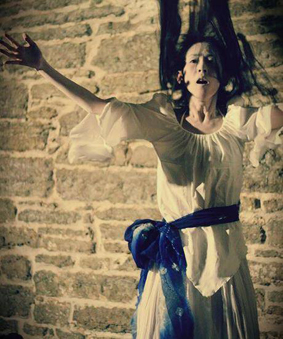 Himeko Narumi is a dancer and art model who has danced all over Japan and participated in many International Festivals. She is currently a member of “The Physical Poets” that use body movements and dance. At the same time, she has a career as a solo dancer and has been working with music in improvisation dance sessions. She focuses on invisible things, a sense of air, music, mind and energy, and the spirit of the land…