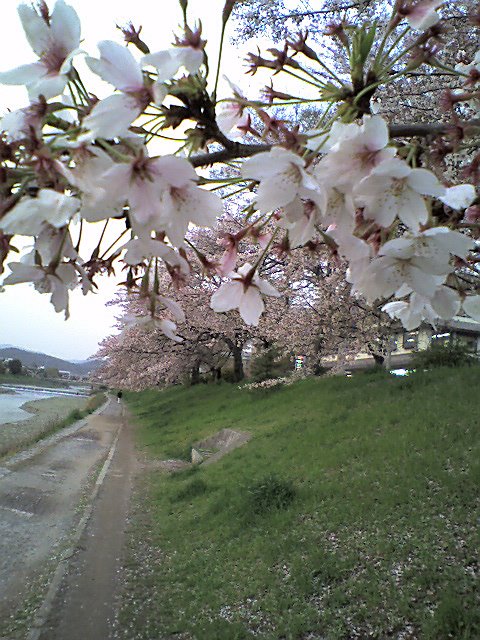 Yes, the hanami season has arrived and the cheery, cherry blossoms look so good I could just EAT them!

Well, there is no more romantic location than Kyoto to see cherry blossom, but what’s your favorite location within the city? For me it’s the tree-lined Kita-Shirakawa canal. Heading away from the Path of Philosophy follow it down Imadegawa a ways and you’ll find yourself in a great place for a stroll under the trees. And unlike other locations, it’s a secret! No crowds! There are some nice cafes and galleries along the route as well, such as Shizuku and Riho. It’s a good spot for firefly viewing in June too. Altogether, a great sakura spot (though not so good for picnics). I decided to ask some members of Deep Kyoto’s extended family:

What is your favorite location for viewing cherry blossom in Kyoto?

And this is what they told me: 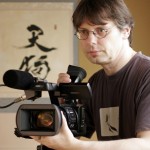 Roger Walch is a film-maker, photographer and passionate jazz pianist from Switzerland. He fell in love with Kyoto when he was a student here between 1990 and 1994 and moved here permanently in 1998. He describes Kyoto as a “city of contrasts, refined culture and tranquility – a place of constant inspiration.” His favorite location?

“The river banks of Kamogawa between Demachiyanagi and Kitayama Street – The perfect combination of green grass, blue water and pink cherry blossoms.”

Bridget Scott from England is a shiatsu therapist, English teacher and dancer. She describes her passions as “Dance, performance, hiking, cycling, and eating home cooked Japanese food”. She first came to Japan in 1989 to study ceramics (but never did).”However long you are in Kyoto,” she says, “there is always something new to discover whether it’s a traditional sweet, a hidden shrine or an uncycled street. If you keep your senses open Kyoto delivers endless delights.” And her recommendation?

“This is a difficult question. I love the way the blossoms are staggered from South to North along the Kamogawa. Oh these heady hanami days! Just when you think you’ve had your last hanami, there are the ancient cherries of Kamigamo Shrine in their full glory. So, I choose the wide open space of Kamigamo Shrine as the place to lie on the grass and enjoy the final flutter of pink.”

Felicity Greenland, from England, is a teacher but her passion is singing. She first came to Kyoto in 1987 on a youth project and asked to describe her relationship with the city says, “We go back a long way”. You can view her photographs here. She recommends Hirano shrine near Ritsumeikan.

“It has its own little meadow. They put up little fairground stalls and sell candy floss – as if the blossom itself isn’t enough – it’s kind of trashy and it makes me smile. I like it best after the little fair when the stalls are all deserted.” 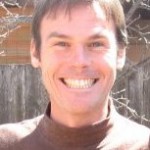 Ted Taylor is a writer, translator and yoga teacher from the US. His passion? “American western landscapes”. He came to Kyoto in late summer 2005, to study Takeuchi-ryu Sogo Bujutsu. Though no longer resident in Kyoto he still loves it for its “Good cafes, prevalent music, and lots of green spaces”. What do you recommend Ted?

“The south end of the Path of Philosophy (Trees and a view!).” 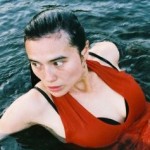 Teacher and performer Mitsu Salmon hails from the USA. Her passions are the arts and travel and so she is the organizer of the globe-trotting International Love Cabaret event performed here in Kyoto’s Urbanguild. Describing her relationship  with Kyoto she says “I have been here two years. My mother is from Japan, so I was seeking to get in touch with my roots.” She loves Kyoto for “the Wabi Sabi, the Japanese aesthetic of the beauty in the old and imperfect. I love these crumbling buildings next to large hills and obaachans selling vegetables by the river.” And the best place for cherry blossom?

“My favorite is the river, but I think anyone with eyes knows that. So my other is the botanical gardens. There the cherry blossoms bloom later, so it is my last chance to enjoy them. I lay down and am surrounded by the flowers, so it feels like I am on a cloud. A pink white cloud and the angels have cameras.” 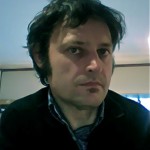 Sean Roe was born in the UK but raised in South Africa. He lists his occupations as “Artist, Musician, Curator, Concert Promoter, Record Collector/Seller and English Teacher”! And his passion is for “an independent Palestine within 2 years!” He came to Kyoto in “April 2007, kind of the opposite of London Calling!” And he loves Kyoto because “it’s unlike London!” His recommendation for the pink, fluffy clouds?

“The footpath along Takano river heading north from Demachiyanagi all the way up to Kitaoji Dori is lined with cherry trees that lean over towards the river. Great place to take a stroll and watch people taking photos of cherry blossoms.”

Jennifer Louise Teeter is Campaigns and Media Coordinator  for the Greenheart Project and also contributes to the Kyoto Journal blog 10,000 Things. She hails from Turtle Island,  lists her occupations as “singer, lecturer, translator, and life-long learner” and her passions as “music and contributing to and creating a culture of peace through the arts and dialogue”. She was “called to Kyoto by a new job when the sakura were in full bloom in April 2009” 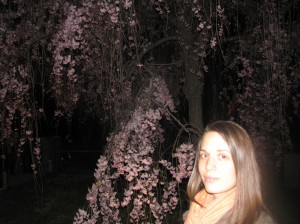 and she has come to love this city for “the Kyoto Moon”. She says:

“From the solemn summit of Daimonji, I imagine gazing at the blanket of pink covering the city as it fades into the sunset.
This is not my favorite yet, but perhaps soon will be after I try it out this year.”