The Home of Craft Beer in Kyoto

Four years since it first opened, the Irish pub formerly known as Mc Loughlin’s has been renamed as Tadg’s. Not a big change really, as I think everyone was calling it that anyway. I’ve written previously about this pub; its friendly hospitality and the fantastic views over the river and city. 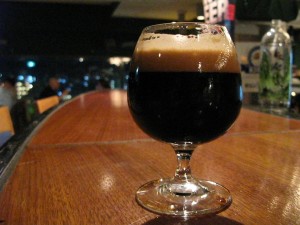 And Tadg’s cooking is also justifiably renowned; he uses locally grown organic vegetables in his many fine creations and the menu features an impressive vegan section. All that aside though, this bar’s most impressive feature is the selection of craft beers: Rogue, Ise Kadoya, Minoh, Yeti Imperial Oak and Victory at Sea… I had a snifter of the latter last night; a fine coffee flavored porter with hints of bitter chocolate like nothing I’ve ever tasted before. Absolutely gorgeous.

We continue our quest for great beers, at the moment we have 10 dedicated craft taps and are currently in the process of installing a new cold room with the addition of 15 new taps. We are also negotiating with the top US importer for some of the greatest beers on the Planet (well the greatest beer in the US of A) and some amazing Japanese beers too.

Bear in mind also that though the standard price for a pint of craft ale is 1200 yen, at Tadg’s it’s only 1000. Great taste at great value; this place is a beer affciondao’s dream! Now, Tadg’s Irish pub has a couple of likely looking events coming up of which you can read more below.

Friday 4th June Come on and party with the The Wild Cards & surprise guest artists. Mr Kuzel and his band of desperados will kick off the gig round 8.30pm.
Here are the happy hour prices from 6pm-8pm: A pitcher of German beer at 1,500 yen,
Tequila at 400 yen a shot, and cocktails at 500 yen.
There will also be a free bar snack buffet from 6pm~8pm.

Saturday 12th June – Is the official relaunch party of Tadg’s Irish Pub. There will be a free buffet, a band and spot prizes. The band is The Flaming Strings (featuring John Kuzek of Wildcards fame) and they will be playing from 8pm till late. Says Tadg: it should be legendary. 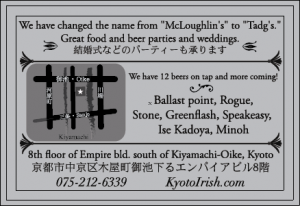 To find Tadg’s walk straight up Kiyamachi from Sanjo, before you get to Oike you should see the Empire building on your right. Tadg’s is on the 8th floor. To the right is a most convenient map. Click on it for a better look.