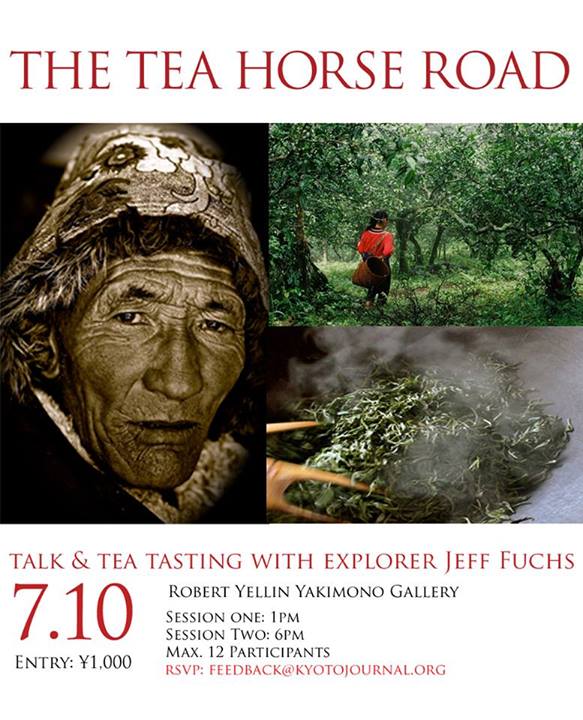 The ancient origins of tea and the present hotbed of the rapidly rising Puerh teas, southern Yunnan was for centuries the remote base from which the green stimulant made its way along the famed Tea Horse Road. A look at the most ancient tea tree forests on the globe and what is left of one of the most daunting trade routes in history. For much of history southern Yunnan’s minorities have cultivated teas that were largely items of trade and tribute. Puerhs from the ancient forests now command enormous prices amongst collectors ironically because of the fact that their production techniques have remained largely unchanged and the raw materials unequalled. Ancient medicine, panacea for the masses, and a fuel and food of timeless vitality.

Award-winning explorer, author and tea procurer Jeff Fuchs presents the origins and routes of Asia’s eternal green. This will also be opportunity to sample Yunnanese tea.

ABOUT JEFF FUCHS:
North Face Ambassador and award-winning explorer Jeff Fuchs, was the first westerner to have travelled by foot the legendary Tea Horse Road over the Himalayas – a journey that took over 7 months. He followed that up with becoming the first documented westerner to journey along and document ‘Tsa-Lam’, The nomadic ‘Route of Salt’ through the eastern Himalayas, a month long foot journey. He subsequently won an ‘Explorer of the Year’ award for “sustainable exploration of the Himalayan Trade Routes”. He most recently completed 36-day expedition along the Route of Wind and Wool through the Himalayas.

Fuchs is a ‘Scholar-in-Residence’ with the prestigious ‘East-West Center’ in Hawaii, counseling and mentoring on the Himalayas’ and advocating a more full understanding of Asia. He is fluent in Mandarin, French, and Tibetan and has counseled PhD students from 22 different countries during his time at the East West Center.

Fuchs’ work has centered on indigenous mountain cultures, oral histories and an obsessive interest in tea. His photos and stories have appeared on three continents in award-winning publications, UNESCO, The Huffington Post, and Outpost Magazine, as well as The Spanish Expedition Society, The Earth, The Toronto Star, The South China Morning Post and Traveler amongst others.

Fuchs has spoken to institutions, universities and schools around the world on the importance of oral narratives and sustainable exploration and tea culture. His work and life have been featured in numerous publications including the Huffington Post and the Financial Times.

He is an admitted ‘tea addict’ who never journeys without an assortment of green leaves to fuel him and is the co-founder of JalamTeas. When he isn’t sipping tea or exploring, he’s based in Shangri-la, northwestern Yunnan, where he’s been for the past 10 years.

Please remember to direct all inquiries to Kyoto Journal at feedback[at]kyotojournal.org!