All those who missed the craft beer event at Zest last Sunday, will be pleased to know there is another such event on May 13th. This from the organizers: 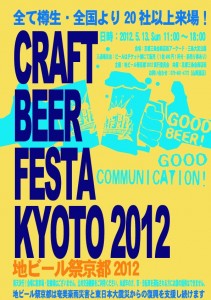 In 2011, Kyoto welcomed its 4th brewery, making Kyoto the city with the most craft breweries in Japan! The quality of Japanese craft beers continues to rise with more and more breweries placing highly in international beer competitions. No longer just for omiyage anymore, increasing numbers of craft beer lovers are fueling a rise in the number of people enjoying the variety that craft beer provides consumers.

In addition to being a tourist destination, Kyoto is home to craftsmanship rich with enterprising spirit, a large student population, and international residents well versed in the riches of craft beer! The Kyoto Craft Beer Festival aims to spread the joy of craft beer as far and wide as possible from the Sanjo Association Shopping Arcade in the heart of Kyoto!

The event will also support the ongoing recovery from the Great East Japan Earthquake and flood damage in the Amami Islands. 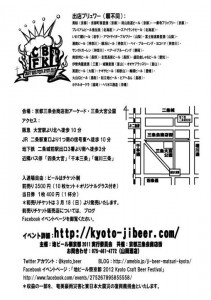