Mario Lopez writes, “Are you free on the 15th December? We have our 5th Visual Documentary Project Screening in Kyoto! Come if you are around!“ 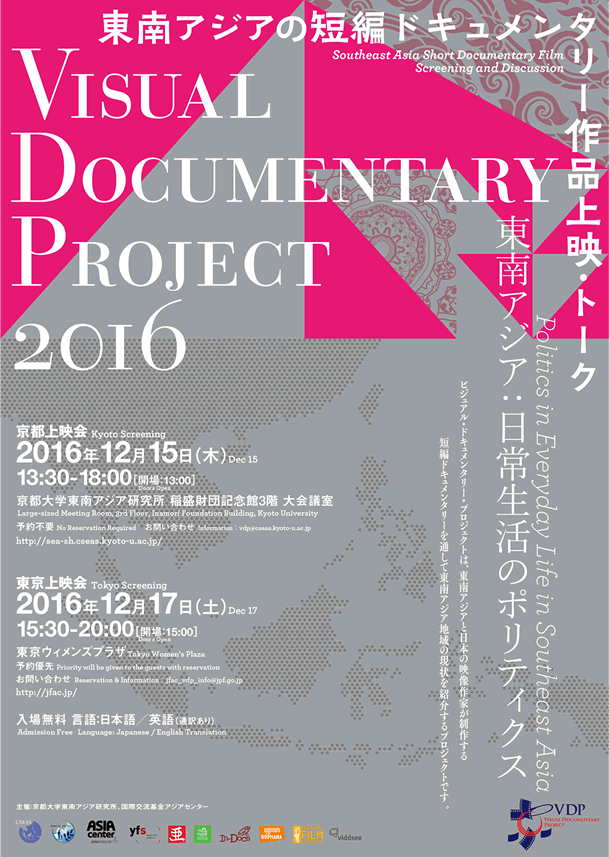 ABOUT THE PROJECT
Southeast Asia is rich in its diversity of ethnic, religious and cultural composition. The region has maintained the coexistence of such diversity while at the same time achieving economic progress and becoming a hub for the flow of people, goods, money and information. Yet at present, the region is also confronted with serious issues such as the decrease of biodiversity and tropical forests, disasters, pandemics, aging population, ethnic and religious conflicts, economic differentiation and poverty. In the face of this, how is coexistence and sustainability possible despite the diversity that exists? How can we make public resources out of the region’ s social foundations which are the basis of people’ s everyday lives? And, how can we connect these in a complementary way to existing systems of governance towards solving the problems and issues mentioned above?

In order to address these questions in the context of Southeast Asia, the Center for Southeast Asian Studies, Kyoto University has initiated “Visual Documentary project” which explicitly examines everyday life through a visual approach since 2012. This project aims to use visual forms of expression to complement the growing literature that exists on Southeast Asian societies. From 2014, the Japan Foundation Asia Center joins this project as co-organizer to help widely promote the richness of Southeast Asian cultures to people in Japan. As of 2016, the project has linked up with numerous film schools in the region to help strengthen the documentary filmmaking network.