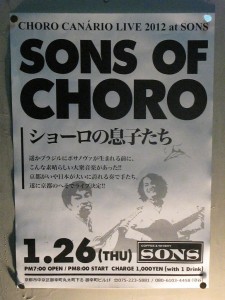 A few weeks ago, the Hailstone Haiku Circle had a New Year’s party, and talking there to Lawrence Barrow, I asked him what kind of music he liked. As I recall his answer was something along the lines of Bob Dylan, Led Zeppelin, Grateful Dead etc… “I know just the place for you,” I said and invited him along to nearby music bar Sons. Sons opened last November, but the owner, Moritani-san (or “Taisho” to his friends) previously ran a music bar called Joao down by Oike/Karasuma. Taisho ran that bar for maybe 16 or 17 years before it closed last September, so he has a lot of regular patrons who now all gather at Bar Sons to listen to his fabulously eclectic record collection. Though the location has changed, the atmosphere is pretty much the same, and I am always guaranteed to meet my friends there if I go. That’s why though it has only been open a short time, it has quickly become my favorite bar in Kyoto.

As it turned out, Lawrence and I were in for a treat that night, as there were two musicians present, Ryoichi and Shinya of Choro Canário, who happened to have their instruments with them and they gave us an impromptu performance. Choro is a type of Brazilian music, light, graceful, intricate and sweet to the ears that I have never heard before. Taisho told me that it predates both Samba and Bossa nova. Listening to the sound of the bandolim (a Brazilian mandolin) and the seven stringed guitar in the soft lighting of Sons bar, surrounded by friends, I was transported. It was a truly magical and unexpected moment. Naturally, when I heard they were playing a live gig proper at Sons last week I was keen to see them again – and this time I brought my camera! Here follow three videos from last Thursday’s performance. More photographs and information are at the end of the post.

For the curious, the head that suddenly appears in this next video belongs to A-chan of Cafe Barbatica.

Choro (Portuguese pronunciation: [ˈʃoɾu], “cry” or “lament”), traditionally called chorinho (“little cry” or “little lament”), is a Brazilian popular music instrumental style. Its origins are in 19th century Rio de Janeiro. In spite of the name, the style often has a fast and happy rhythm, characterized by virtuosity, improvisation, subtle modulations and full of syncopation and counterpoint. Choro is considered the first urban popular music typical of Brazil. -from Wikipedia

You can see more videos from the (three set!) performance here, here, here and here!

Choro Canário are Ryoichi Katoh on bandolim and Shinya Setono on the seven stringed classical guitar. To find out more about Choro Canário, please visit Ryoichi Katoh’s website at http://bandolim.exblog.jp

Here are the pictures: