Christmas in Japan comes with a difference.  “Romantic Christmas Eve” means all the restaurants and love hotels are booked out: woe betide the man who doesn’t buy his loved one an expensive present.  Yet the next morning everyone has to tramp off to work, for Christmas Day is no holiday.  The birth of the emperor (December 23) takes precedence over the birth of Jesus.  That means you get to do things at Christmas you could never do back home, such as go shopping, watch a film or even go to work.

Only about 1% of Japanese are Christian, yet with Christmas carols playing downtown, Christmas decorations on the houses, and Christmas cake in the coffee shops you could easily forget that Kyoto is the heartland of Japanese Buddhism.  That’s why to get the real flavour of a Kyoto Christmas, it’s worth visiting Chion-in on December 25.  There’s a ceremony that takes place in the enormous Founder’s Hall, which is quite an occasion.  The full priestly hierarchy is on parade, with over a thousand people banging away on mokugyo (wooden drums). 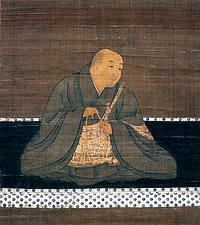 The Foundation Hall stands on the very site where the Pure Land Sect founder, Honen {1133-1212), once preached.  It houses a sacred image of him, which gets to be ceremonially cleaned on this special day.  Like Jesus, Honen was the bearer of good news namely that a deity called Amida had vowed to save all who called on his name.
During the ceremony Honen’s statue gets treated with the kind of reverence normally reserved for mighty potentates and awesome deities.  You’ve never seen a proper prostration until you witness just how the young priests approach the sacred statue.  All the traits of the Japanese are on display: the attention to detail; the meticulousness; the studied formality; the love of ritual.  It’s the religious equivalent of the Oscar-winning film Okuribito (Departures). 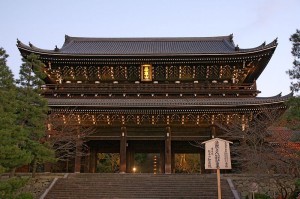 Afterwards take a wander round Chion-in.  It’s got the largest main gate in Japan (as featured in The Last Samurai), and a massive seventy-ton bell that is rung in spectacular fashion at New Year.  If you’re looking for a Christmas game, why not try hunting down the temple’s Seven Wonders?  A corridor that squeaks like a nightingale; self-made coffins by the builders of the main gate; an umbrella in the rafters; sparrows that flew away from a painting; a cat that sees in three directions; a large rice paddle 2.5 meters long; a cucumber rock.  And if all that’s not enough, you can visit the temple’s museum and the Hojo Garden, designated by Kyoto City as a famous scenic spot, no less.  By the end of the day you’ll have had a Christmas with a difference.  A Kyoto Christmas.
John Dougill is professor of British Studies at Kyoto’s Ryukoku University and the author of Kyoto: A Cultural History, In Search of the Hidden Christians, and Japan’s World Heritage Sites. He is also a contributor to our book, Deep Kyoto: Walks. You can read his previous articles for Deep Kyoto here. John will write again in a few days with some top tips for New Year’s Eve!
For more about Chion-in, see http://www.chion-in.or.jp/e/index.html
For the Seven Wonders, see http://www.chion-in.or.jp/e/place_to_see/seven.html