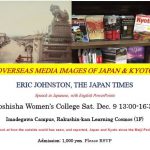 On December 9th 2017(a Saturday), Eric Johnston will be speaking at Doshisha Women's College in Kyoto on overseas media reports and images of Japan, and particularly Kyoto, since the Meiji Period. Eric will be giving the speech in Japanese but with an English PowerPoint presentation. Says Eric, "Hopefully, it will be a interesting historical journey." I'm sure it will … END_OF_DOCUMENT_TOKEN_TO_BE_REPLACED 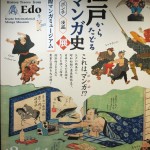 Yesterday, Mewby and I went to see the "Great Manga History Traces from Edo" exhibition at Kyoto International Manga Museum. This is a fascinating exhibition whether you are interested in the early development of manga, or of its role in social history. Manga has a long history as a satirical tool, used broadly to mock social and political trends. The museum displays a great … END_OF_DOCUMENT_TOKEN_TO_BE_REPLACED 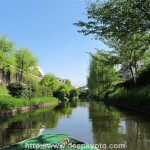 My latest article for Inside Kyoto is an exploration of the backstreets and waterways of Fushimi - Kyoto's famed sake making district. Included in the article are places to taste sake, a boating cruise, a visit to the Teradaya Inn (where Sakamoto Ryoma narrowly escaped assassination), and a Buddhist temple dedicated to a Hindu river deity that happens to have a Hidden Christian … END_OF_DOCUMENT_TOKEN_TO_BE_REPLACED 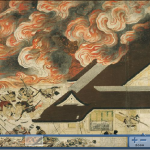 "Few paintings of the period capture the force, confusion, and terror of battle as effectively as does the episode of the burning of the Sanjō Palace in the Heiji monogatari emaki." - The Encyclopaedia Britannica One night in January 1160, a band of 500 men stormed the retired Emperor Go-Shirakawa's palace at Sanjō, took the former emperor captive, killed most of his staff … END_OF_DOCUMENT_TOKEN_TO_BE_REPLACED 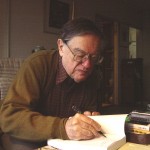 On New Year's Day the Japan Times published a wonderful article by the renowned Japanese scholar Donald Keene, reflecting on the changes he has seen in Japan over the past 70 years. In a fascinating account he tells of life in the immediate post-war years and after; a time of much hardship, but also, a golden age in modern Japanese literature and arts. In particular though, it … END_OF_DOCUMENT_TOKEN_TO_BE_REPLACED 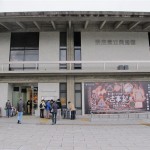 Last month Mewby and I went down to Nara and took in the Kojiki exhibition currently ongoing at Nara Prefectural Art Museum. I would happily recommend the exhibition as a fascinating and comprehensive exploration of every aspect of Japan's oldest book. Whether, you are interested in the deepest roots of Japanese culture, ancient mythology and the glorious art it has inspired, … END_OF_DOCUMENT_TOKEN_TO_BE_REPLACED