Setsubun is an old festival for seeing out the hardships of winter and welcoming in the spring, symbolized in the ritual act of throwing beans at mask clad devils… 鬼は外福は内! (“oni wa soto! fuku wa uchi!” – “devils out, and good luck in!“) people cry while pelting their lucky beans till the demonic forces beat a retreat. There are a variety of sites around town where you can join in with devil dances and bean throwing ceremonies which I shall list below.

Here you get to see Maiko and Geiko throwing the beans! Bean pelting and traditional dances will occur at various times on both the 2nd & 3rd of February as ladies from different districts come to perform. Times on the 2nd are: 1pm, 2pm, 3pm and 4pm. On the 3rd the times are 11am, 1pm, 3pm and 4pm.
To get there take Kyoto City Bus #206, and get off at Gion. Here is a MAP. Website (Japanese): http://www.yasaka-jinja.or.jp/event/setsubun.html 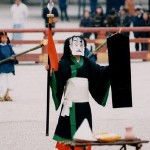 Heian Shrine
February 3rd: From 11:30 am until 2pm there is a Kyogen traditional comedy performance. Bean pelting is from 3pm followed by a sacred bonfire. Sweet sake is served free all day.
To get there take Kyoto City Bus #5 and get off at Kyoto Kaikan Bijutsukan-mae. Here is a MAP. You can find more details in Japanese here: http://www.heianjingu.or.jp/02/0201.html 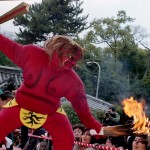 Rozan-ji Temple
February 3rd: Here you can see devil dancing from 3pm and bean pelting from 4pm. Old charms will be burned in a bonfire from 5pm.
To get there take Kyoto City Bus #205 and get off at Furitsu Idai Byoin-mae. Here is a MAP. You can find more details in Japanese here: http://www7a.biglobe.ne.jp/~rozanji/50_setubun.html

Yoshida Shrine:
The biggest disappointment this year is that Yoshida Shrine will be seriously downsizing their annual bonfire. Traditionally, Yoshida Shrine holds the biggest (and longest) Setsubun festival in Kyoto from the 2nd to the 4th. Since the Muromachi era, the climax of this festival has always been a huge bonfire on the night of the 3rd. Pilgrims return all their old amulets and charms and a huge pile of them is burned in a truly massive inferno before the shrine… However, this year the City Government has seen fit to impose new regulations on the disposal of ash after the fire, and these have proven too costly for the shrine to afford. This really is a terrible pity, both for local residents who take part in the annual cycle of seasonal rites, and for visitors to the city who will be denied a chance to see this incredible spectacle. Let’s hope the shrine can work out a deal with the pen-pushers at City Hall for next year. In the meantime, Yoshida Shrine will continue with its festival sans conflagration. It is still worth visiting for the ceremony to drive out evil spirits which will be held at 6pm on the evening of the 2nd. This involves actual mask-clad devils in colourful costumes getting pelted with beans. And as with most festivals there are 屋台 (yatai – food stalls) galore lining the route to the shrine, so there’s plenty to eat and drink. See details at the Yoshida Shrine website (Japanese): http://www.yoshidajinja.com/setubunsai.htm
To get there take Kyoto City Bus #206 and get off at Kyodai Seimon-mae. Here is a MAP.

UPDATE: Apparently, Yoshida Shrine will have a fire, but a much, much smaller one. I only came across this story today, but it seems it has been something of an ongoing saga. I’m told the city actually backed down about the new rules, but it was too late for the shrine to change their revised plans… Better luck next year!
*With the exception of the poster detail at the top of this article, other images are taken from the respective shrine and temple websites.