I’ve recently spotted a cameraman roaming the corridors of the school where I work. My hair having gotten all shaggy and unkempt, and not wanting to lower the tone of the old school album, I figured this was a warning. Time for my biannual haircut! Anyway, as it happens, last Saturday I was talking to Stewart Wachs , and I happened to mention the need for a trim.

And so he told me that he’s been going to the same barber’s for absolute donkey’s. He went there originally because it was near his house, he said, but even now that he has moved to Shiga, he still comes back into town to get his haircut by his favorite barber: Kinoshita-san of the shop Futaba. Kinoshita-san, he told me, has been “standing at the same chair” in the same shop since the 1950’s. Though he’s 80 now, he’s still going strong, together with his business partner of 33 years, Kawai-san.

“Actually,” said Stewart, “I’ve been thinking I’d like to write something about him. Why don’t you do something on Deep Kyoto about it?”

“You know the best way for me to do that,” I said, “Would be to go there and get my hair cut right now.” And after getting some directions from Stewart, that’s exactly what I did.

Kinoshita-san and Kawai-san turned out to be a couple of real old fashioned gents in a real old fashioned gentleman’s barbershop. Kinoshita-san told me that he has been working in the same shop since 1957. That’s 53 years of cutting hair. You know you are in a safe pair of hands when your barber has a lifetime of experience behind him. Back in the day, there were seven chairs (and more barbers) but now there are only the four chairs.   Kinoshita-san lives with his wife above and behind the shop, so taking out those chairs has given them a bit more space.

Anyway, I sat down in one of the chairs and explained what I wanted: super short and tidy and neat, please. They had this handy book of haircuts to look at and choose from, so I could be sure that we understood each other. And none of your spiky-haired, soft-lad, fashion-magazine nonsense either. Proper men’s haircuts – like they had back in the day. Now, here for your perusal are the results: 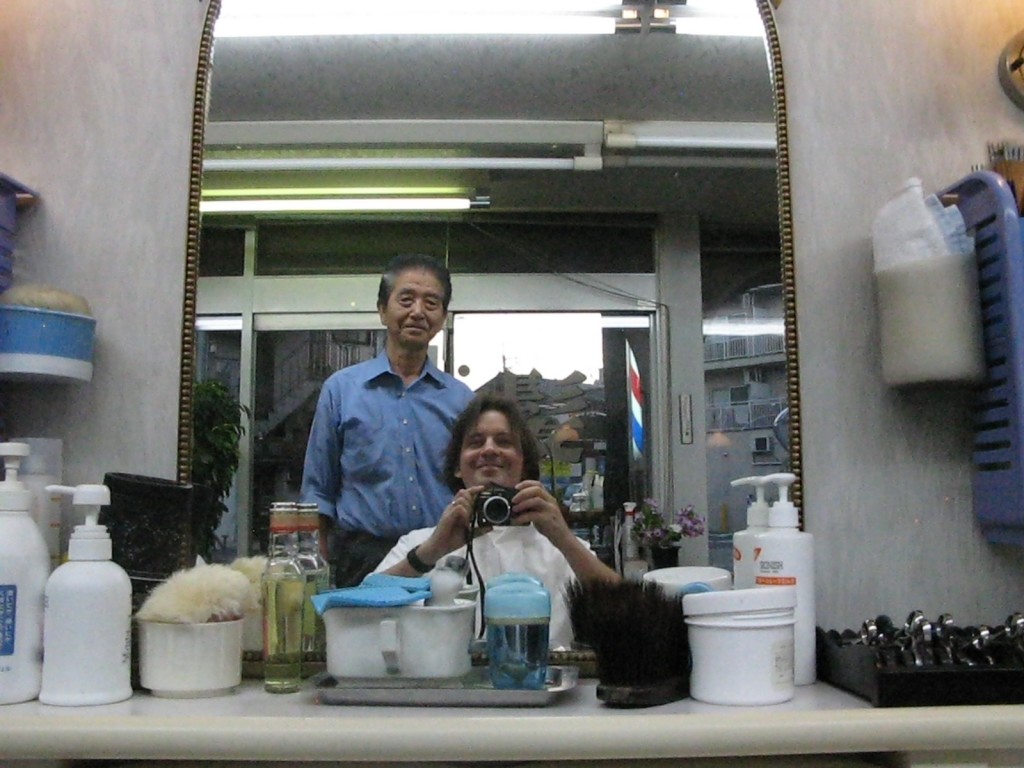 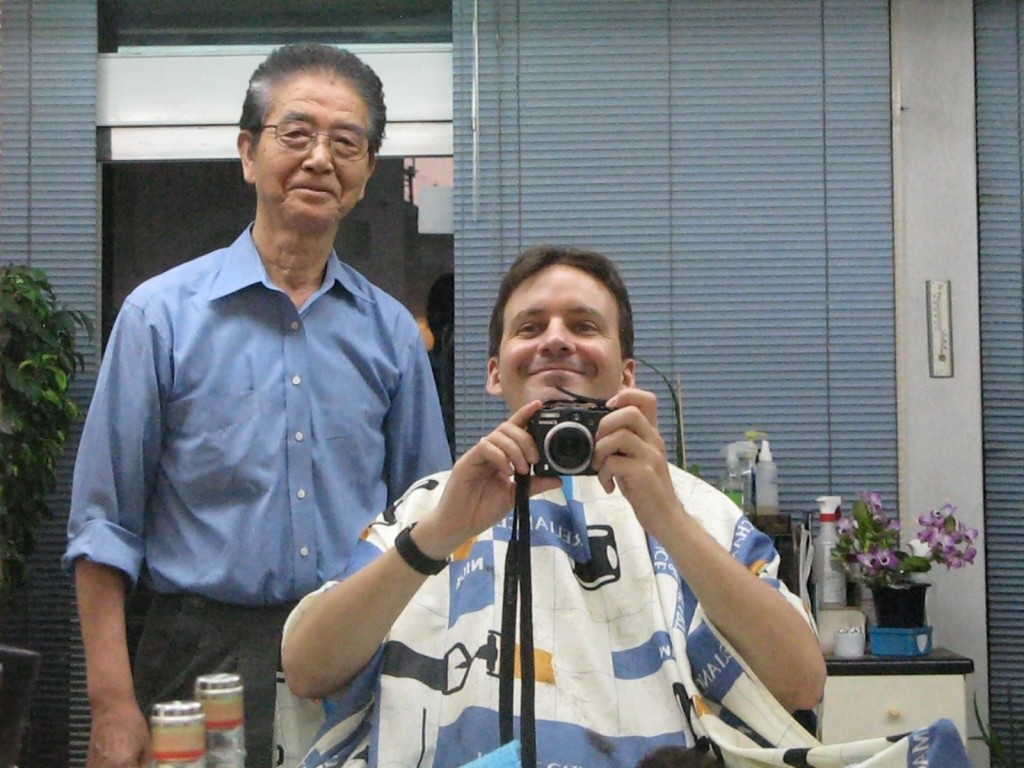 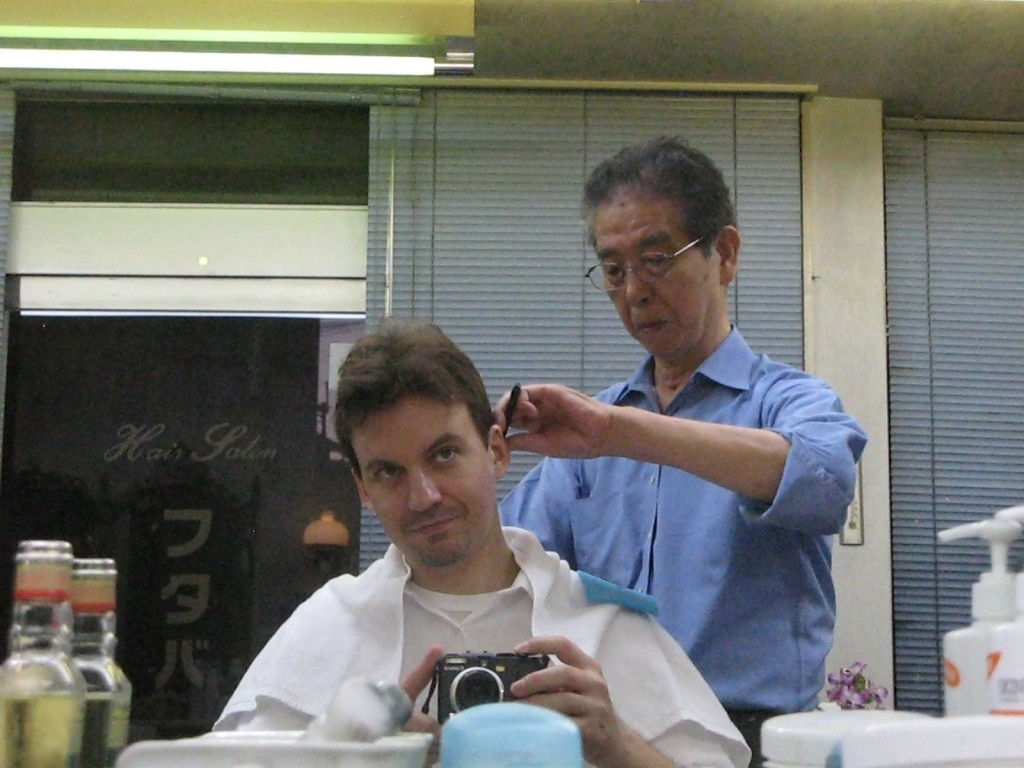 Giving it the old massage. 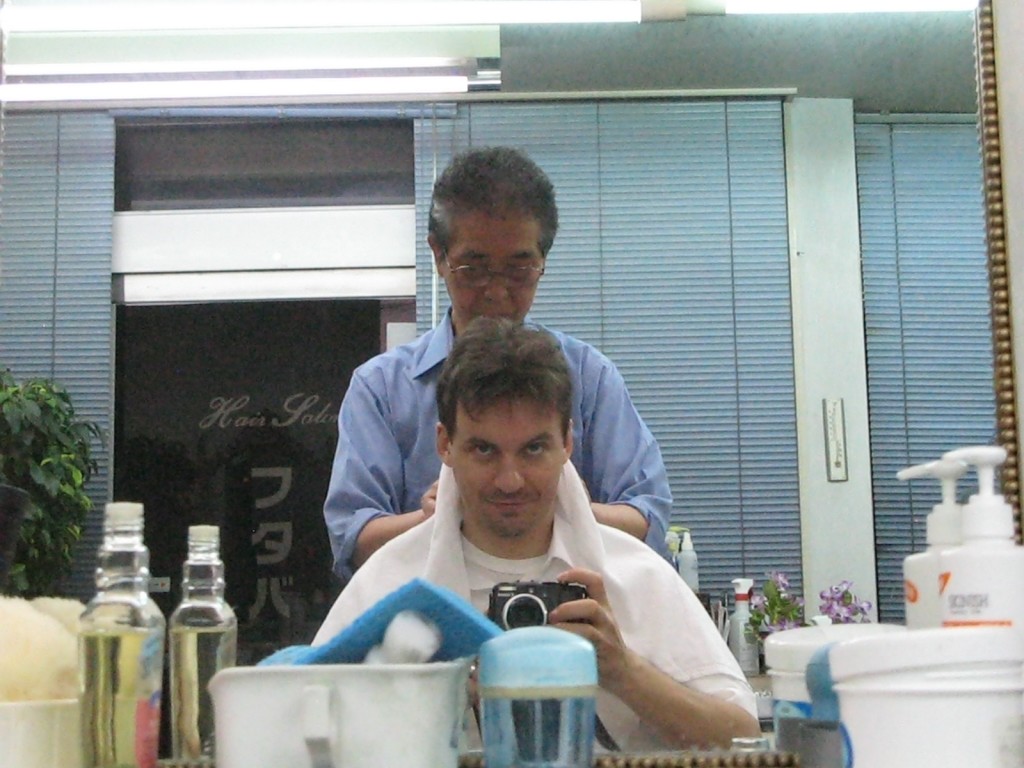 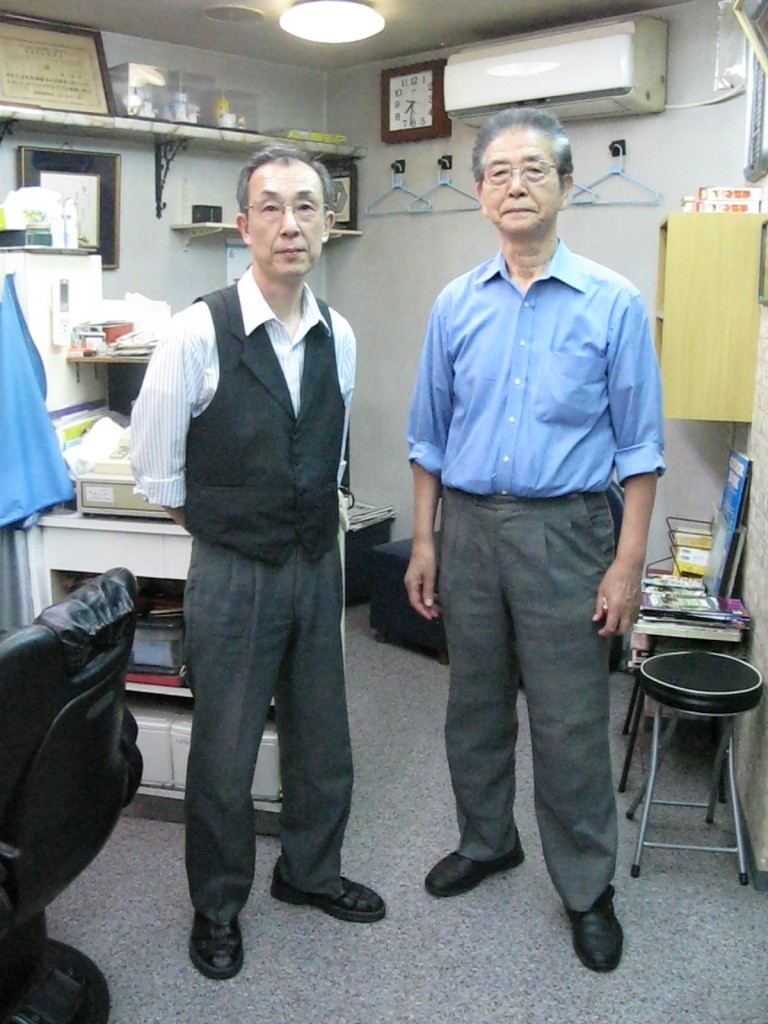 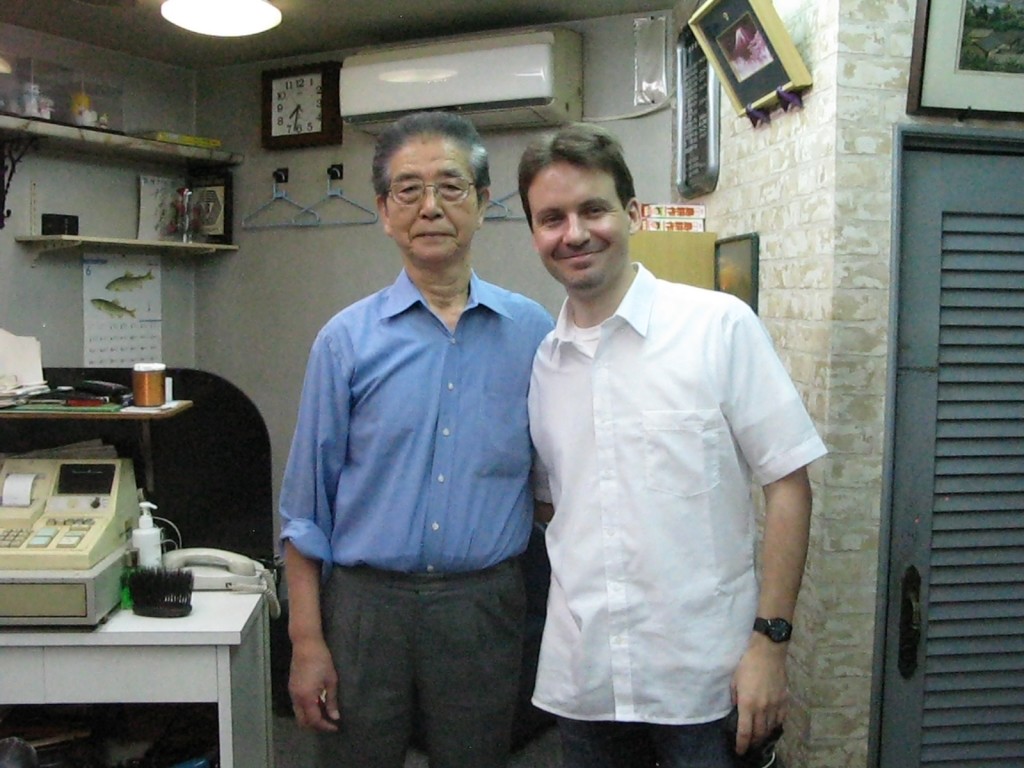 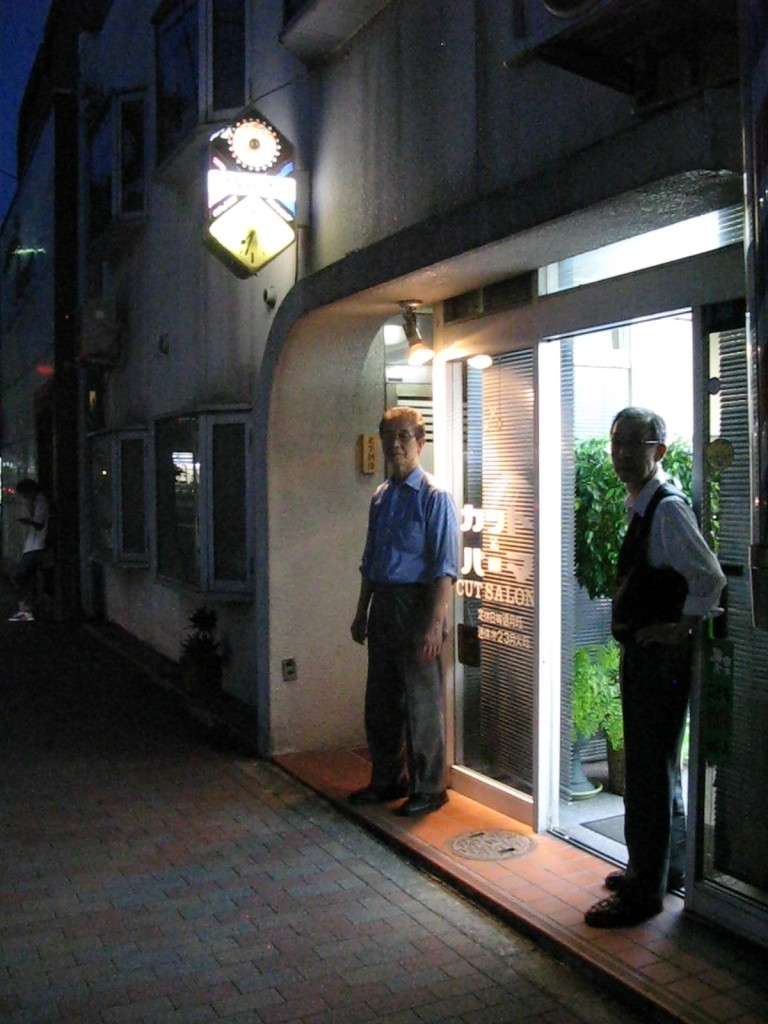 Neither Kinoshita-san or Kawai-san speak English, so you will need to speak a bit of Japanese if you come here. If you do though, they are very friendly. Their barbershop Futaba Riyouin (フタバ理容院) is in the Kamishichiken area (look out for the characters 上七軒 on the bus stop and police box); an old hanamachi or geisha district in northwest Kyoto. More precisely it is on the south side of Imadegawa, between Senbon Dori and Kitano Tenmangu. Here is a map.

Closed Mondays and every second and third Tuesday of the month (except this June when it’s closed on the third and fourth Tuesday!).  Call ahead to check the opening times. Tel:０７５－４６２－４３９６
Address: 京都市上京区今出川七本松西入（上七軒バス停前）

Many thanks to Stewart Wachs for the tip! I’ll definitely be going there again!