Today I am posting a short excerpt from our ebook Deep Kyoto: Walks. In Ghosts, Monkeys & Other Neighbours, Bridget Scott meditates on her personal connection to her neighborhood on a well-worn stroll from Shisen-dō to Manshu-in…

In Kyoto, the act of walking itself has taken on a new meaning for me. This awareness began over twenty years ago with my first butoh class: feel your feet moving on the earth, I was told. In my shiatsu training I began connecting my whole body to the earth through my feet. In my traditional Japanese dance training, I step with each breath guided by my departed teacher’s taped voice. In the main hall at Shisendo, in our zazen group, we walk after sitting for forty minutes, as we inhale and exhale.

Today, a Sunday morning, two days after the longest day of the year, I start my walk outside Shisendo. On another day I might have sat on the tatami in the main hall and looked across the swept gravel at the round azalea bushes holding onto the last of their pink flowers. Breathed in the sweet incense, heard the waterfall and the regular thwack of the bamboo device to scare deer. Seen the canopy of maples, watched the black carp drift in the pond and walked around the tiered garden. Looked at the photo of Charles and Diana and the bold calligraphy of Ishikawa Jozan. Had my everyday self calmed and brought back to my senses.

It is easy to miss Shisendo as there is no conspicuous signage. Looking through the thatched gateway, the stony path rising between bamboo distorts our sense of distance. This is the humble entrance of what was once the hermitage of Ishikawa Jozan, a retired samurai who had served Tokugawa Ieyasu. He built Shisendo in 1642, and here settled into an artistic life: designing the garden, composing poems, practicing calligraphy and the tea ceremony. There is still a creative hush in the air around Shisendo. I glimpse some visitors stepping down the path. They seem quietened, as if touched by a natural tranquility. Outside people are chatting and posing for photos by the rustic entrance. In the early morning, there is always a frantic team of gardeners sweeping, pruning and manicuring in the grounds. It takes hard work, rain or shine, to keep a famous garden natural.

Walking down from Shisendo I turn immediately right at the line of red and white bibbed jizo on the corner. There is a trace of incense in the air from the morning offerings. The sandy wall of the wooden flanked storage house reminds me that this area used to be farmland. Today politicians with photoshopped faces smile down at us from their glossy posters. Along the road is a small house with a garden of potted native plants immaculately tended. There is an economy of space as a small concrete area is transformed into something verdant and vibrant.

Now I hear fast flowing water from the stream surrounding Enkō-ji Temple. There is scaffolding around the temple wall. It has been in the process of reconstruction for the past three months. This is not just a wall, it is a crafted structure. It has stone foundations with white plaster covering compacted earth, book-ended by a wooden frame and roofed by tiles. I can also tell you, there is bamboo and twine inside that wall, because I’ve seen it. But wait a minute, I don’t remember that rock and so much moss at the front of the temple, and where has the board with zen sayings gone?

Walking up the stone path and up the steps, I turn in front of the ticket office and take in the statue of Kannon and the view of the western mountains. A smiley woman in the ticket office takes my money, telling me to take my time.

Looking at the altar I notice it is unusually bare. No flowers, sweets, fruit, tea or water, the five items that are usually offered. I recall a Canadian friend’s mother being alone here and witnessing a monkey grab the offerings. She found herself doing mad ape like gestures as she tried to tell the bemused priest she wasn’t the vandal. Just as I remember this, the new priest appears and explains “There’s been a troop of monkeys in the area for the past few days. Sometimes one or two straggler monkeys invade the temple and steal the offerings. There are two troops of about seventy monkeys roaming Mount Hiei.”

Actually, I have experienced those invasions myself. The monkeys periodically run amok in the neighbourhood. I now recognize the squeaking and whooping of the monkeys and clattering as they leap across the tiled roofs. There are so many and they are so quick and agile, even if I am home it is difficult to save my garden vegetables from their hairy little hands and hungry mouths. They have swung on the electric cables, shimmied up the bamboo, feasted on my potatoes and daikon, pulled up and then spat out garlic, knocked the heads off broccoli, chewed off the delicate buds of peas and beans and much to my chagrin, snacked on the elongated bud of my Casablanca lily. Their timing is difficult to predict, but usually when something is about to be harvested, when I am alone in the house, during winter or summer, and when it is raining – anytime!

The priest is relatively new to the temple, replacing the old priest who died a year or so ago. I feel a sense of calm as this priest talks to me, a deeply lived human quality. He retired from his job as a supermarket executive and at 60 completed three years of hard Zen training so he could take care of Enkō-ji when the former priest died. This man is the centre of the renaissance happening at Enkō-ji: the new wall and ticket office, the redesign of the front garden, and the new paths, all in traditional style. It is he who rings the bell that wakes me up at 5:50 every morning and around 7:00 operates the very loud motorized leaf blower.

Stepping out of the main hall into the garden, I notice there is a bamboo pole jutting diagonally out of the water basin. I was instructed by an old man to bend down and put my ear to the pole. I hear a delicate, watery, tinkly sound. This is a suikinkutsu – water drips into an underground ceramic pot and resonates in the bamboo.

The green of the young maples and moss is soothing to my eyes. The breeze rustling through the tall bamboo grove and the sound of gravel as I tread the path around the pond lull me into an illusionary space. Now I find myself in the graveyard and there is the old man again, with flowers for his family grave. He points to a grand memorial stone on a hill and tells me that Tokugawa Ieyasu’s tooth is preserved there. It was brought here by Genkitsu, the founder of Enkō-ji, who had found favour with the shogun for predicting a fortuitous day for a victorious battle. The old man, speaking English that would put most high school students to shame, urges me to go up and take a look. The reward for the effort of going up the steps on this hot, humid morning, is discovering a welcoming wooden bench with an incredible view looking west over northern Kyoto. I see the priest is down there cleaning a grave and chatting to the old man. I feel swept back in time sitting thinking about Tokugawa’s tooth and a different era. 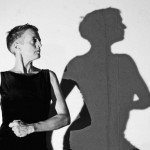 About Bridget Scott
Bridget Scott, a Londoner, is the sixth child and a twin in a family of eight. She visited Kyoto in 1989, intending to study pottery and have a six month break from legal training. She went to see a butoh dance performance and was inspired to join a butoh class, despite having no background in dance. Her debut performance was in 1990. Since 1995 Bridget has created her own dance pieces and collaborates with dancers, musicians and artists. From 2006 she began training in traditional Japanese dance with Senrei Nishikawa. She continues to perform both in Japan and internationally.

Bridget is a qualified Shiatsu therapist, after apprenticing in Kyoto for nine years with a Shiatsu master. Bridget teaches English, Shiatsu and Butoh dance. This is her first published written work. She currently resides in Kyoto, near Shisendo and grows vegetables, undeterred by monkeys.