For the last post of 2014, let us return to a piece first written by our good friend, John Dougill in 2010.  That year I followed John’s advice by paying a visit to both Kurodani and Shimogamo Shrine on New Year’s Eve, and so I am reposting some photos from that night too. It had been snowing quite heavily on the 31st, so Kurodani in particular was really beautiful; all dressed up in white like a fairytale.

The true soul of Japan is neither Shinto nor Buddhist. It’s Shinto-Buddhist. Until the artificial split of early Meiji times, the country had more than 1000 years of happy syncretism. Born Shinto, die Buddhist is the Japanese way.

Shinto is this-worldly, concerned with rites of passage and social well-being. Buddhism is other-worldly, concerned with individual salvation. At New Year the two religions come together like yin and yang, either side of midnight. Buddhism sees out the death of the old; Shinto celebrates the birth of the new. Joya-no-kane (tolling of the bell) gives way to Hatsumode (first visit of the year).

To get the full feel of a Kyoto New Year, you need to be syncretic too. In the dying minutes of the year, go hear the bell at a Buddhist temple. By tradition it is rung 108 times once for every attachment that plagues the human condition. Then head for a shrine to pick up arrow and amulets for protection through the coming year.

With over 3000 temples and shrines in Kyoto, you’re spoilt for choice. A popular but crowded combination is Chion-in and Yasaka Jinja. File up the hill to watch the young priests at the temple acrobatically swing on ropes to ring the bell. Then head down to the shrine to get twisted bamboo lit with the sacred Okera fire. It will purify your home.

Personally I prefer the open space of Kurodani, where the bell booms soulfully over the nearby hillside. Open fires give off a warm glow, which you can add to with heated sake before lining up to ring the bell. Afterwards a twenty-minute walk leads through dark and dozing streets to the wooded surrounds of Shimogamo Jinja.

Suddenly there are laughing voices, bright kimono, and gaudy lights. Aspiring yakuza sell candy floss and goldfish. Here all is jollity and smiles. ‘Akemashite omedetou gozaimasu’ rings out on every side. At the shrine people toss coins over the heads of those in front into the offertory boxes. With the blessing of the kami, this too will be a happy New Year. A happy Kyoto New Year! 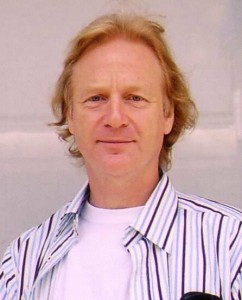 John Dougill is professor of British Studies at Kyoto’s Ryukoku University and the author of Kyoto: A Cultural History, In Search of the Hidden Christians, and Japan’s World Heritage Sites. He is also a contributor to our book, Deep Kyoto: Walks.
John also keeps a regular blog, Green Shinto (www.greenshinto.com). Born in the UK to a Czech mother and a Yorkshire Viking, he studied Russian and Slavic Studies at university. However, a lust for wandering took him to the Middle East, where he married a Yemeni, before travelling around the world for a year. He set up house in Oxford, but fate intervened to send him to Kanazawa where he was a lone gaijin on the backside of Japan, dreaming of one day teaching in Kyoto. Now he has to pinch himself every morning as he looks up from his bed at Daimonji. When not playing chess, writing haiku or walking along the Kamogawa, he works as professor of Cultural Studies at Ryukoku University.