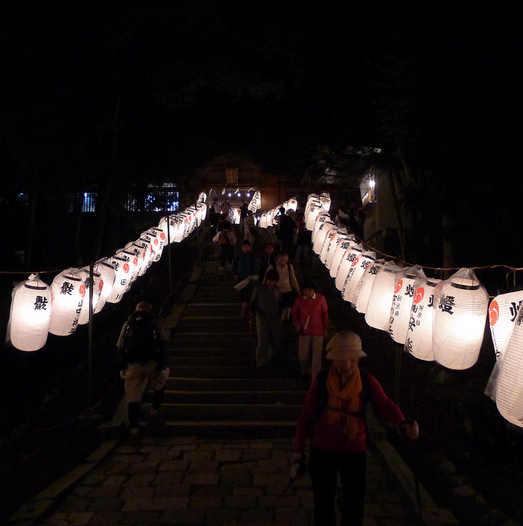 Today’s post is an extract from Hiking Mount Atago by Sanborn Brown in which he details his participation in the annual Sennichi Tsuyasai pilgrimage to the top of Mount Atago which takes place each year on July 31st. In this excerpt from our book Deep Kyoto: Walks, Sanborn describes his ascent with an eccentric tea ceremony master, and other pilgrims, to the top of Mount Atago, during this very special festival. For those who don’t know much about this festival, here’s a brief explanation from Sanborn’s excellent Cycle Kyoto site:

…on the night of July 31, Mount Atago witnesses a huge number of pilgrims. On that night, from roughly 9 pm, Mount Atago plays host to “Sennichi Tsuyasai,” a festival that is all about fire, both good and bad.

It is a holy and profound and magical night not to be missed.

The origin of the festival derives from the hope for a thousand days of flame (cooking, heating), and also for a thousand days without home-wrecking fire. From top to bottom, the hike is roughly four kilometers. Hikers gather in the village of Kiyotaki at the base of the mountain around dusk. To guide them, the city strings up lights from Kiyotaki to the very top at Atago Shrine. Families, couples, older people, and groups make the hike up a crowded and sociable affair. Once at the top, pilgrims can purchase good luck charms that are said to ward off fire and bad luck… 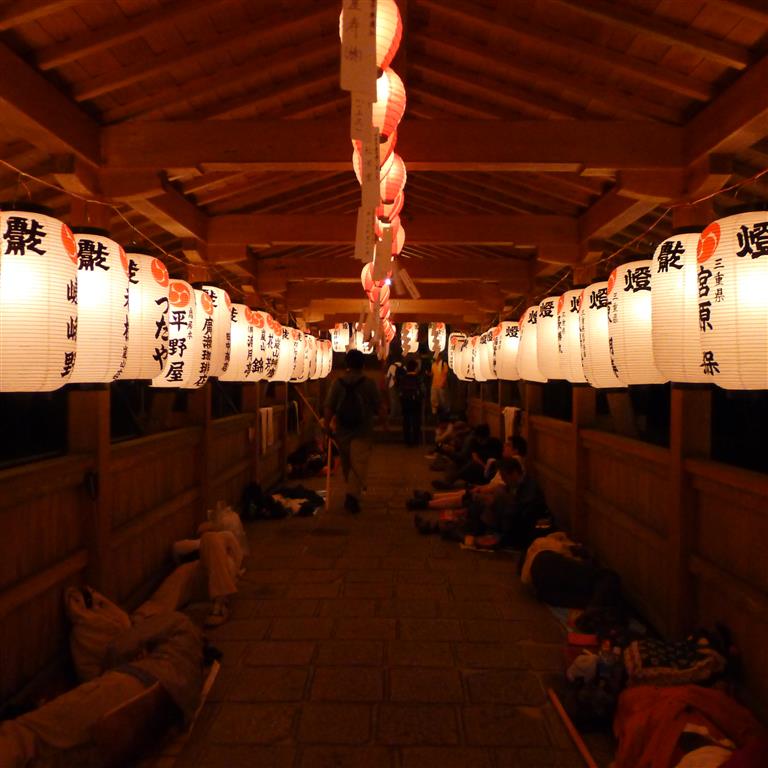 From the stone steps in front of the imposing gate of Ninna-ji Temple and its two wooden Nio-san deities protecting the walled compound, a Japanese friend who calls himself Amigo and I head west on squeaky single-gear mamachari bikes. It is 8 pm on a sultry late July night and a bright moon lights our way. After an up-down stretch along which homebound commuters in cars speed past us, Lake Hirosawa spreads out on our right. This manmade lake was dug out around 969 C.E. so that the monks at nearby Henjō-ji Temple would have a better view. Today it is popular for bird watching, strolling its 1.3 km (almost a mile) perimeter, or paddling about in a rental boat. On our left, in the darkness, the smell of farm fields is pungent. We continue on to the northern outskirts of Arashiyama. Panting our way up a narrow bumpy slope lined by traditional homes and buildings, we park beyond Adashino Nenbutsu Temple (once a dumping ground for corpses) in a bike lot set up every year on this one evening. The barely lit tree-covered lot is manned by a lone uniformed guard in reflective gear, and is already filled with hundreds of bikes.

From there, it is a fifteen-minute walk up and over a hill on an old mountain road. Normally, pedestrians and cyclists are allowed to make a white-knuckle trip through the 500-meter long single-lane tunnel once used by trains. On this night however only vehicles are permitted to enter. We are already coated in a sheen of sweat when we reach the top. In the distance below us, at the opposite end of the tunnel, there is lighting and people are milling about in hiking gear; some have finished, others like us are about to set out.

Here, at the foot of Mount Atago, we find our party waiting in front of the Toenkyo Bashi (“Monkey Crossing Bridge”) that spans the Kiyotaki River. Fellow pilgrims, they will hike with us to the top of the mountain tonight, returning in the early hours of the following morning. Like Amigo, they are all learning sado, the Japanese tea ceremony. After short introductions, the group forms a circle, and in the center our leader – the rotund, elephant-kneed, and blustery tea Sensei – does a quick head count. All incline toward him toward him; then, on his command, we set off.

Having proceeded 20 meters, Sensei calls us to an abrupt halt in the middle of the bridge that will take us into the village of Kiyotaki. We have to check for the legendary Japanese giant salamander, which is said to inhabit the cool and clear waters of the river below. Sensei gives a brief talk on the creatures while we peer into the darkness below…

…After the brief lecture concludes, followed by a thirty-second scan of the dark waters below for a possible sighting of one of the reticent nocturnal giants, Sensei orders us onward, “Let’s go, let’s go! We’ll find one on the way down.”

Sensei wobbles on in front, his two wooden hiking sticks flailing out on either side of his torso as we press through the village. His bulk heaves in syncopated locomotion. The village is thronged with hikers and nighttime activity, but we move through it quickly to the entrance to the trail – passing under the vermillion torii gate that signifies that we are entering holy ground – and begin the ascent of the 924-meter high mountain, the highest in Kyoto.

This nighttime trek up an ancient pilgrimage route is part of the annual Sennichi Tsuyasai festival, which is held at Atago every July 31st until the early hours of August 1st. It is a hike to the peak on which Atago Shrine sits.

Our ascent commences in the aforementioned Kiyotaki, a rural hamlet made up of an art gallery, several restaurants, and a handful of houses. On this night, a tent has been set up in the village; under it sits a cluster of firemen who will be there until morning ready to respond in the event of injury or an emergency. Kiyotaki is one of several entrances to the mountain but the main one for the festival (it is also the “male” entrance to Atago; a “female” entrance can be found near JR Hozukyō Station on the other side of the mountain). The distance to the top is marked in two ways: by Jizo statues, adorned with red bibs and spaced roughly 109 meters apart; and, more legibly, by umber-colored placards set up by the fire department. The latter breaks the hike into forty stages, and each of the forty signs has a hand-written fire prevention slogan.

“Go on ahead! Go on, go on, don’t wait for me; it will take me hours to get to the top,” barks an out of breath Sensei after the initial climb. This is the first of his many breaks along the route. “Besides, we have all night, and someone has to keep an eye out for Tengu!” The mythical Tengu, the legendary long-nosed creature in Japanese folklore, is thought to have resided at, among other locations, Atago since ancient times.

The first nineteen stages are a steady climb, busy with colorfully dressed pilgrims in every manner of hiking gear. From that point, the trail becomes less severe, even flat in places. At one rest place, near the 20th stage, we take a break. From here, the lights of Kyoto twinkle far below in the distance through an opening in the trees…

About Sanborn Brown
Sanborn Brown teaches at Osaka Kyoiku University, and writes for www.CycleKyoto.com and www.JapanVisitor.com. He is from Philadelphia, USA, and has lived in Kyoto for more than a decade.