Hina Matsuri (雛祭り) is a Doll Festival held every year on March 3rd. It is dedicated to the health and happiness of young girls in each family’s household. Though I have lived in Japan for many years, family celebrations like Hina Matsuri, have never really meant much to me – until now. Now that I am marrying into a Japanese family, I get to take part and experience these celebrations first hand. So a few days ago, I helped set up the  hina dan (雛壇), the platform on which the dolls are displayed. As I took the various dolls out of their boxes and arranged them in the correct order with their various accoutrements I found myself fascinated. Much as a Western family might enjoy decorating a tree together for Christmas, this too is a delightful custom.

The Hina doll festival as we know it today, was developed in the mid-Edo period, but it has its roots in something much older. In ancient times people believed that doll-like effigies had magical powers and could take on a person’s misfortune and disease and carry it away. Dolls would be placed beneath a child’s pillow for this purpose and then in the spring, the dolls would be put in straw boats and set afloat on a river. As the dolls sailed off toward the sea, so too would bad luck and illness be carried away. Apparently, this custom is still practiced in some parts of the country…

Today though the typical Hina Doll display depicts a Heian era court and is symbolic of a well ordered family. Presumably the Emperor and Empress at the top represent mom and dad.

On the second tier are three court ladies, san-nin kanjo (三人官女). They are holding equipment for serving sake. 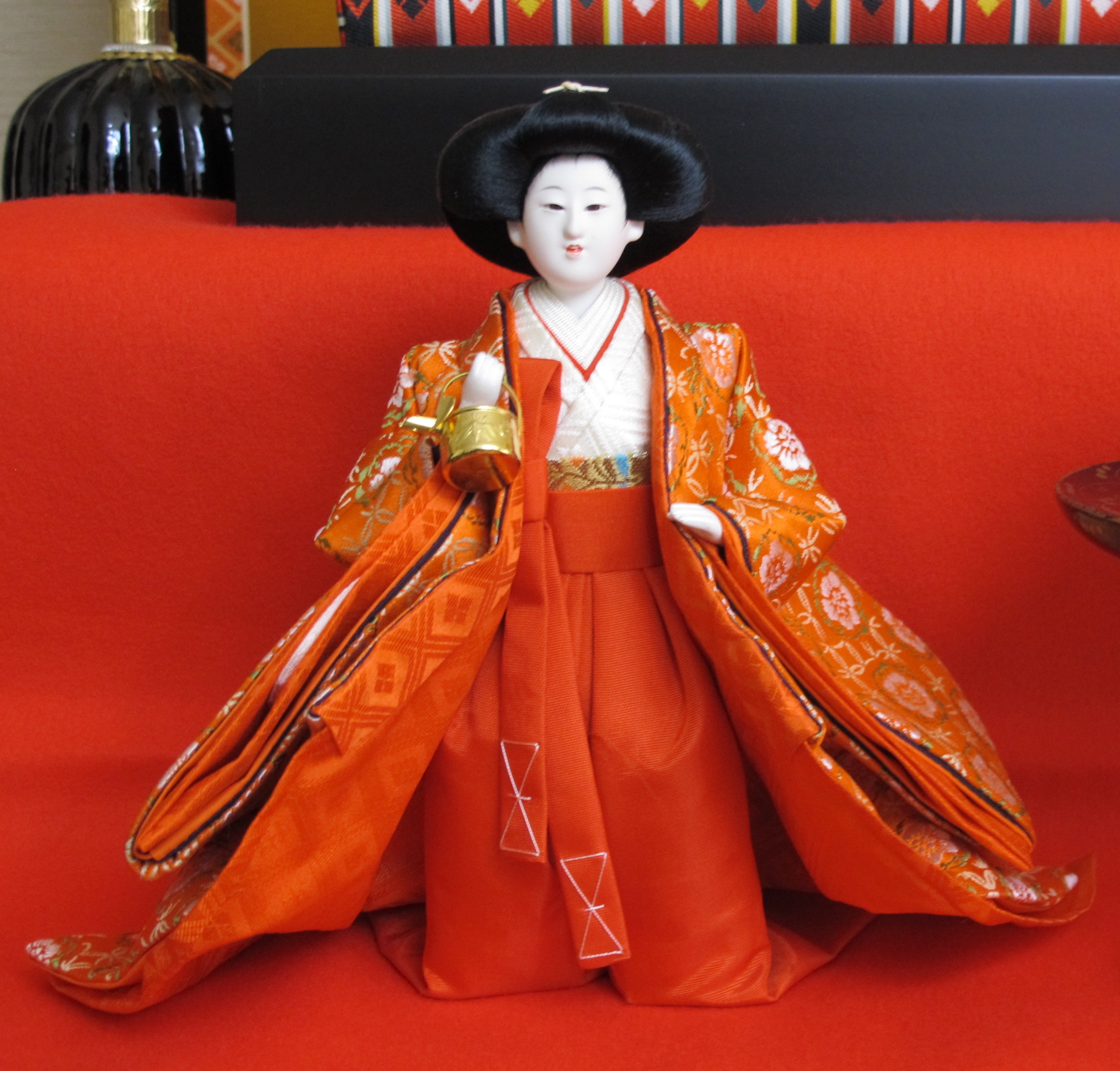 Below the ladies are five musicians, gonin bayashi (五人囃子), bearing an assortment of drums and flutes.

This young fellow has no instrument because he is the singer, or utaikata (謡い方). 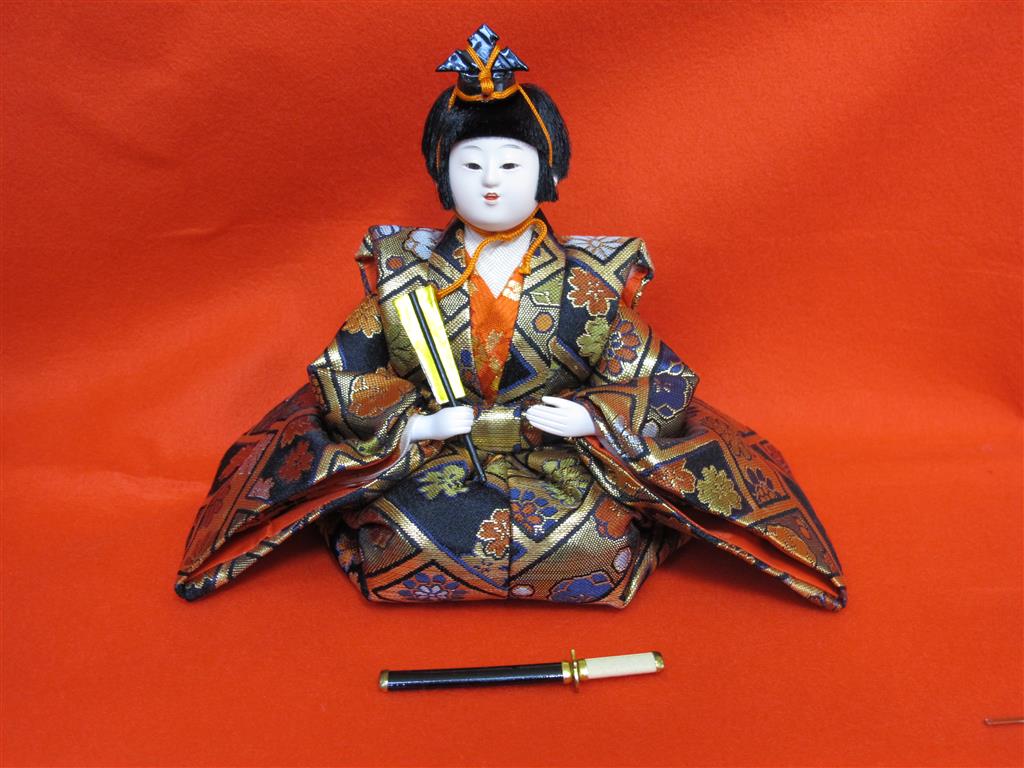 Below the musicians are two retainers bearing swords, bows and arrows. The Minister of the Left (左大臣 Sadaijin) is a venerable old man. 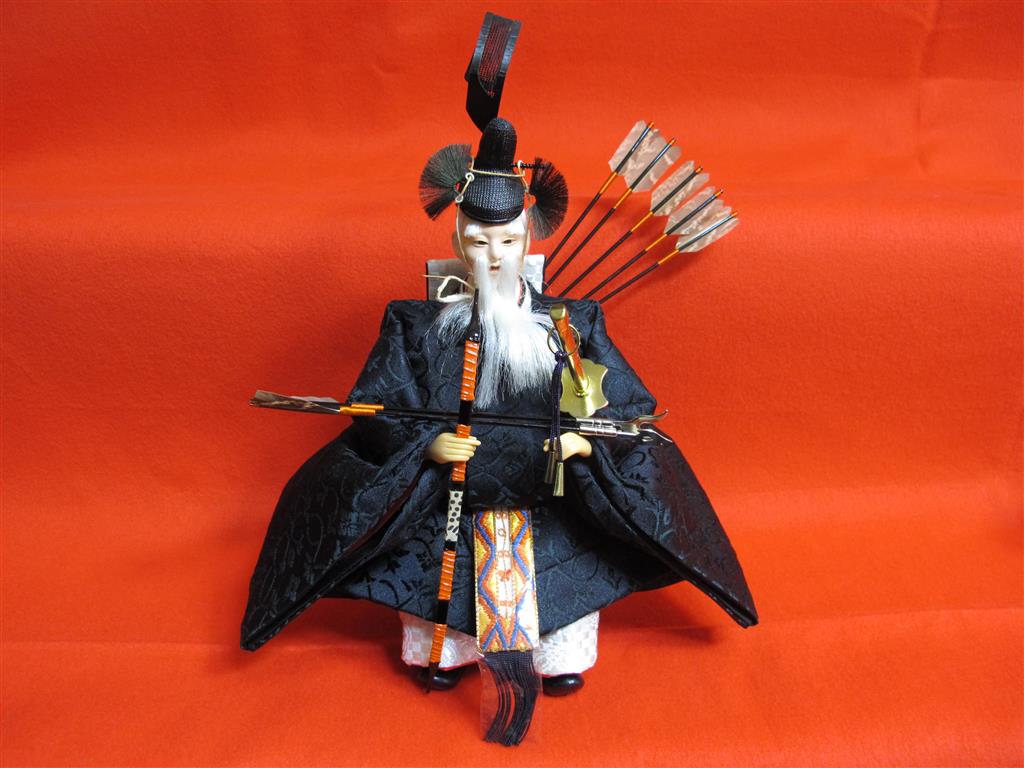 The Minister of the Right (右大臣 Udaijin) is much younger. 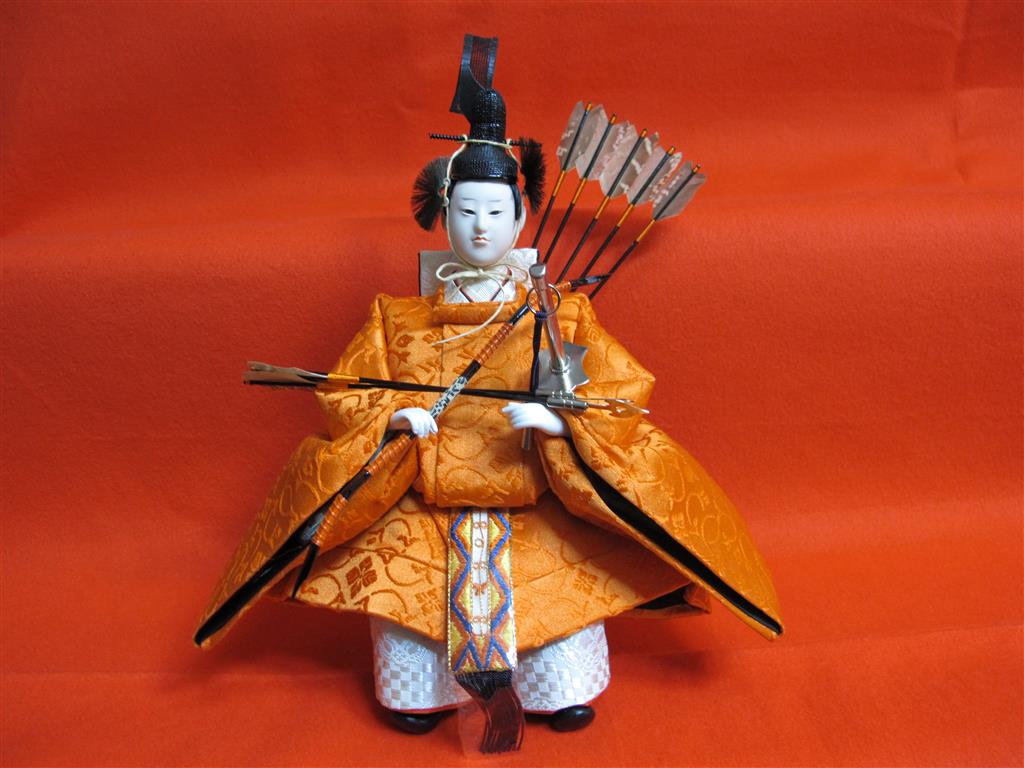 On the fifth tier of the display are two trees: an orange tree (右近の橘 ukon no tachibana) and a cherry tree (左近の桜 sakon no sakura). And between these trees are three intriguing figures: the three servants or sannin jōgo 三人上戸. 上戸 is usually translated as “drunk” but why these three honest workers should be drunk I have no idea. They are named the crying drunk, nakijōgo (泣き上戸): 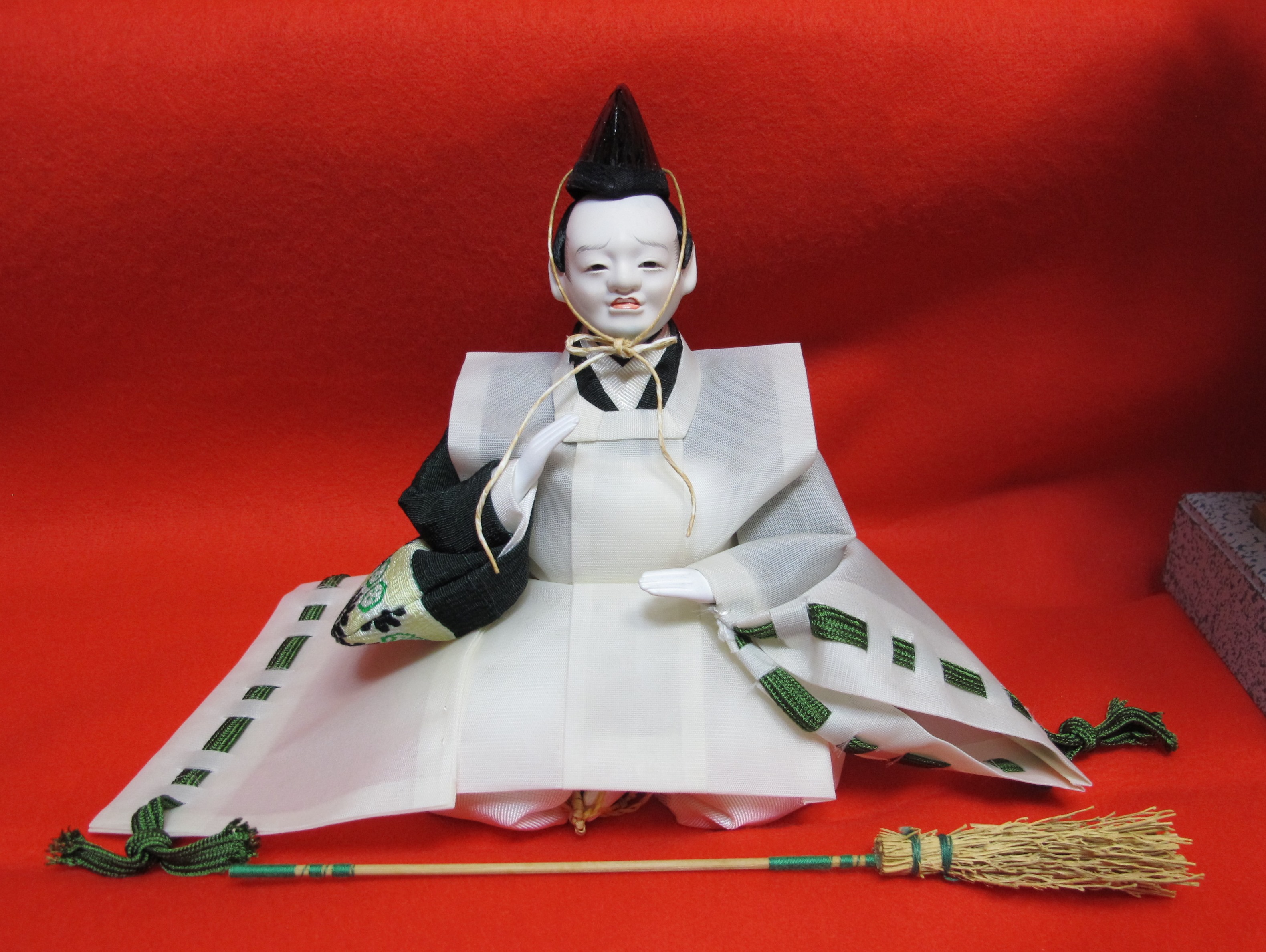 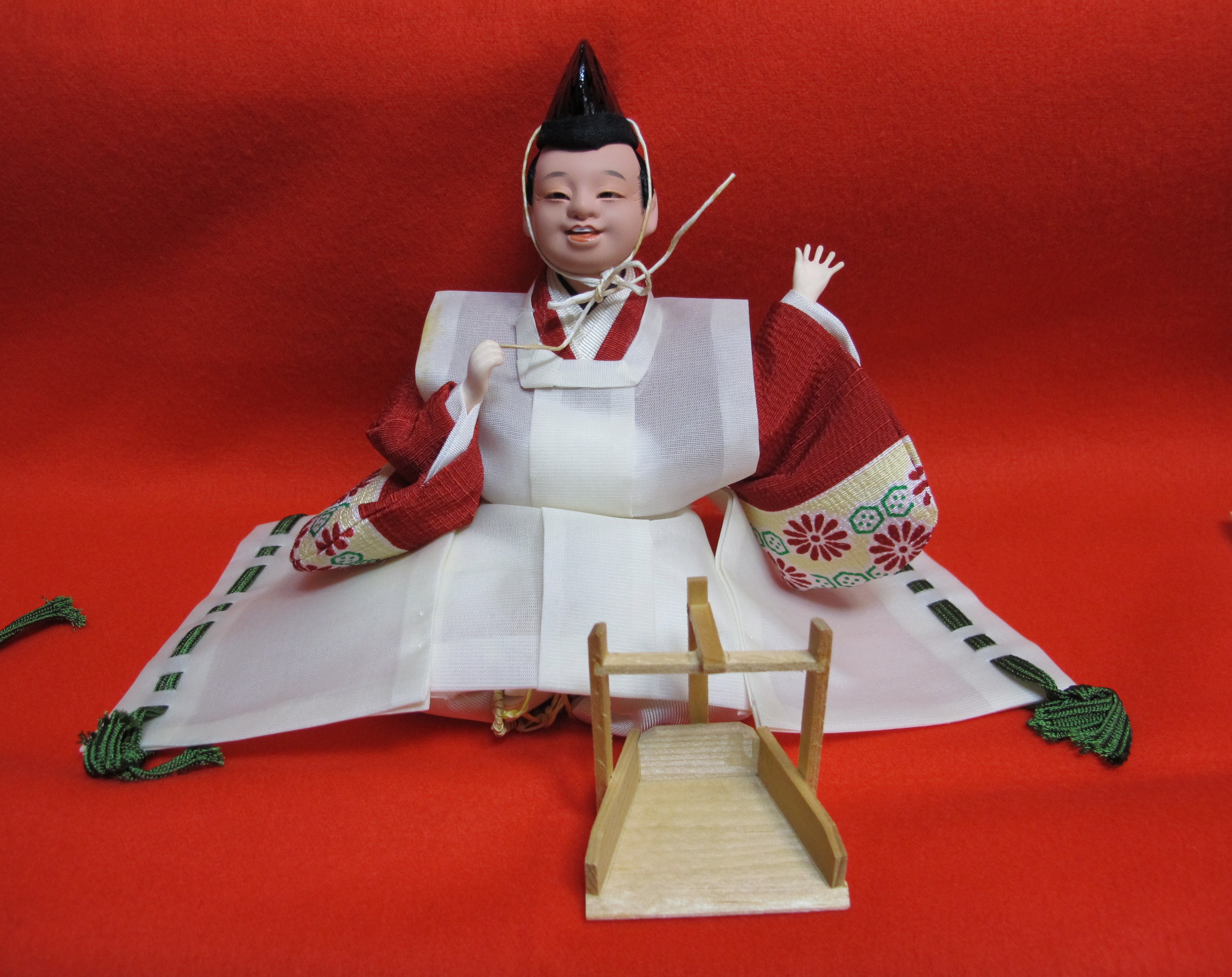 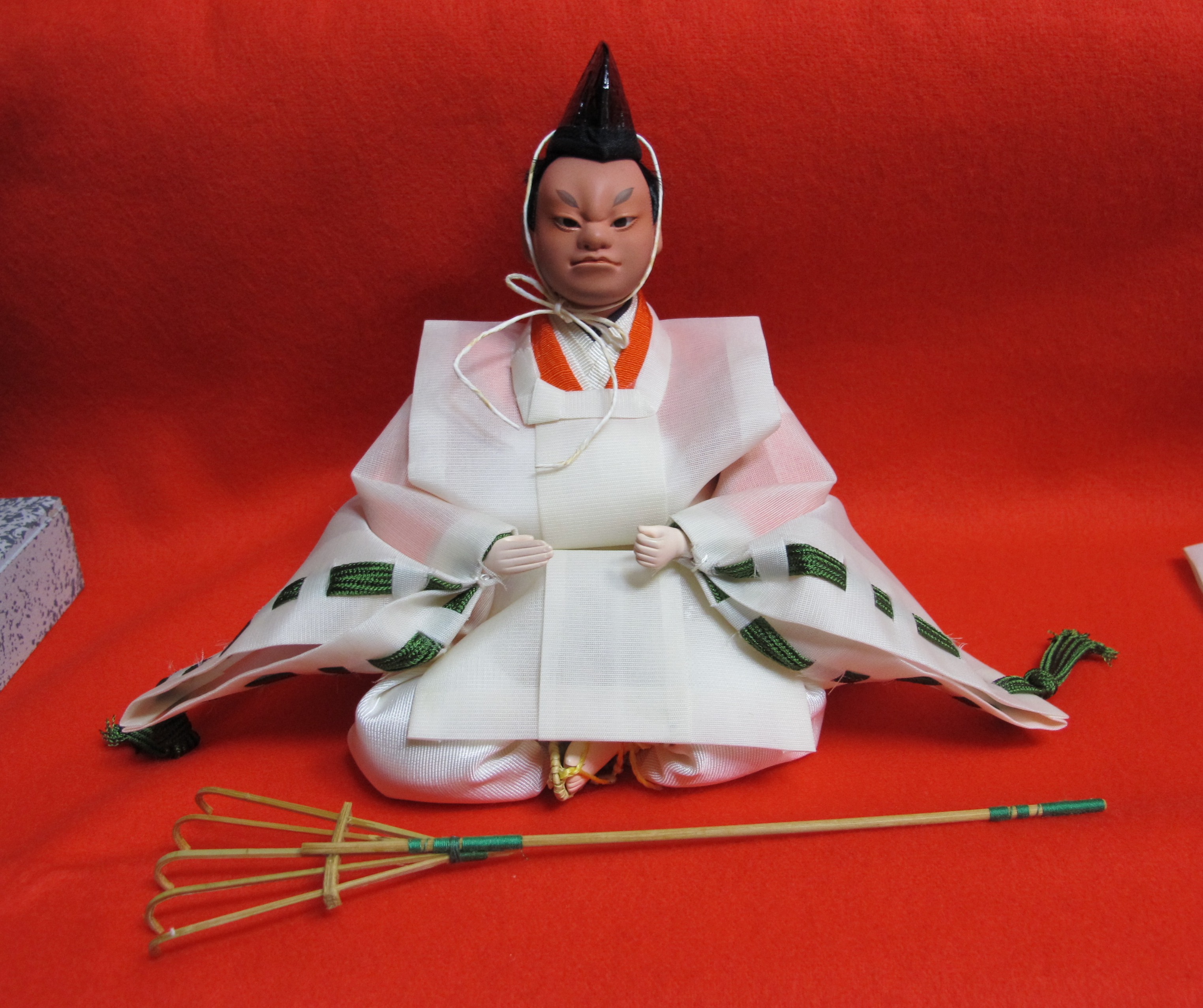 On the sixth tier a variety of laquered furniture, representing a young girl’s dowry is displayed. Among these treasures is a miniature tea ceremony set. 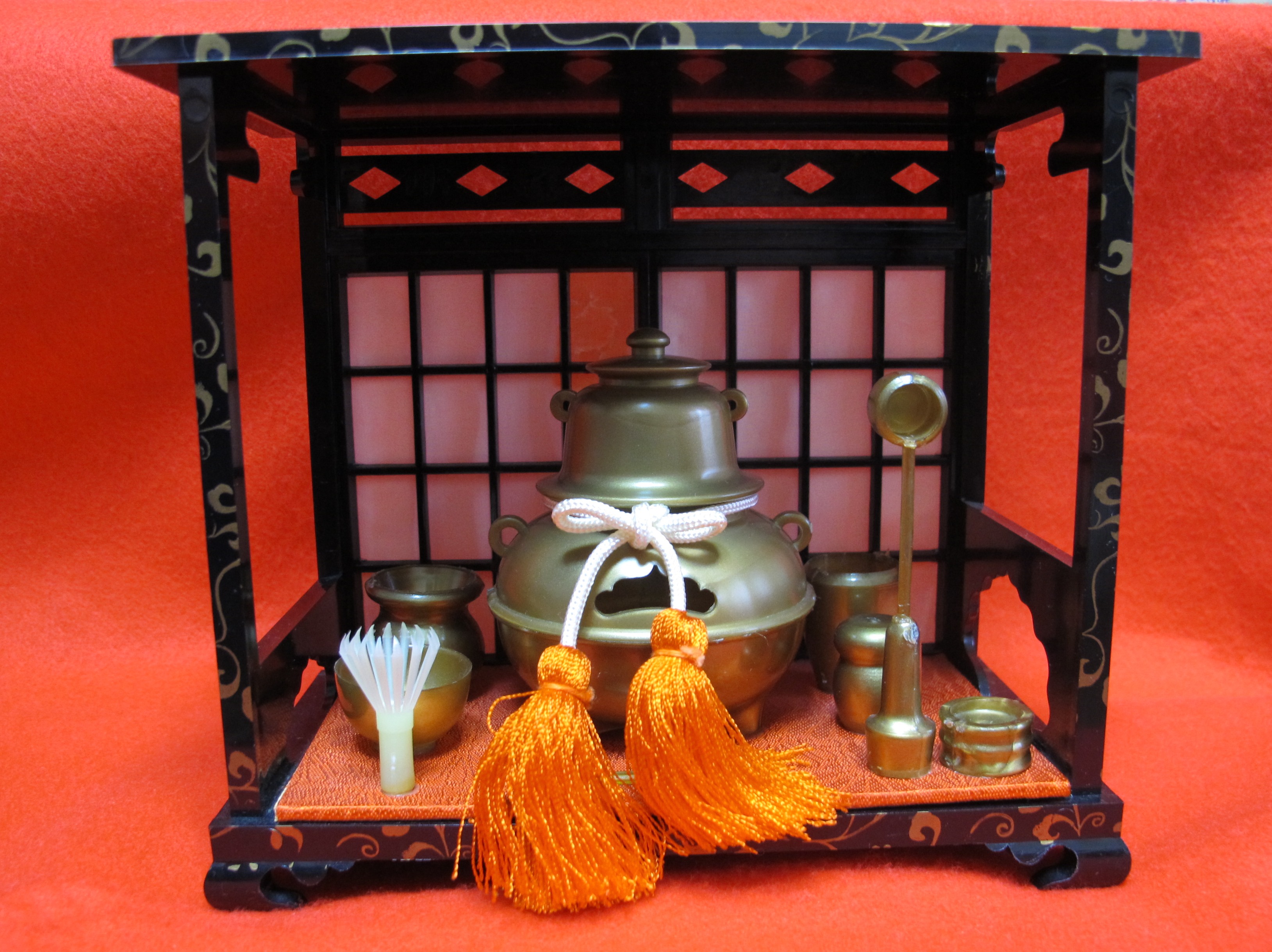 The final tier carries vehicles used when carrying a bride away from the imperial palace, such as a palanquin: 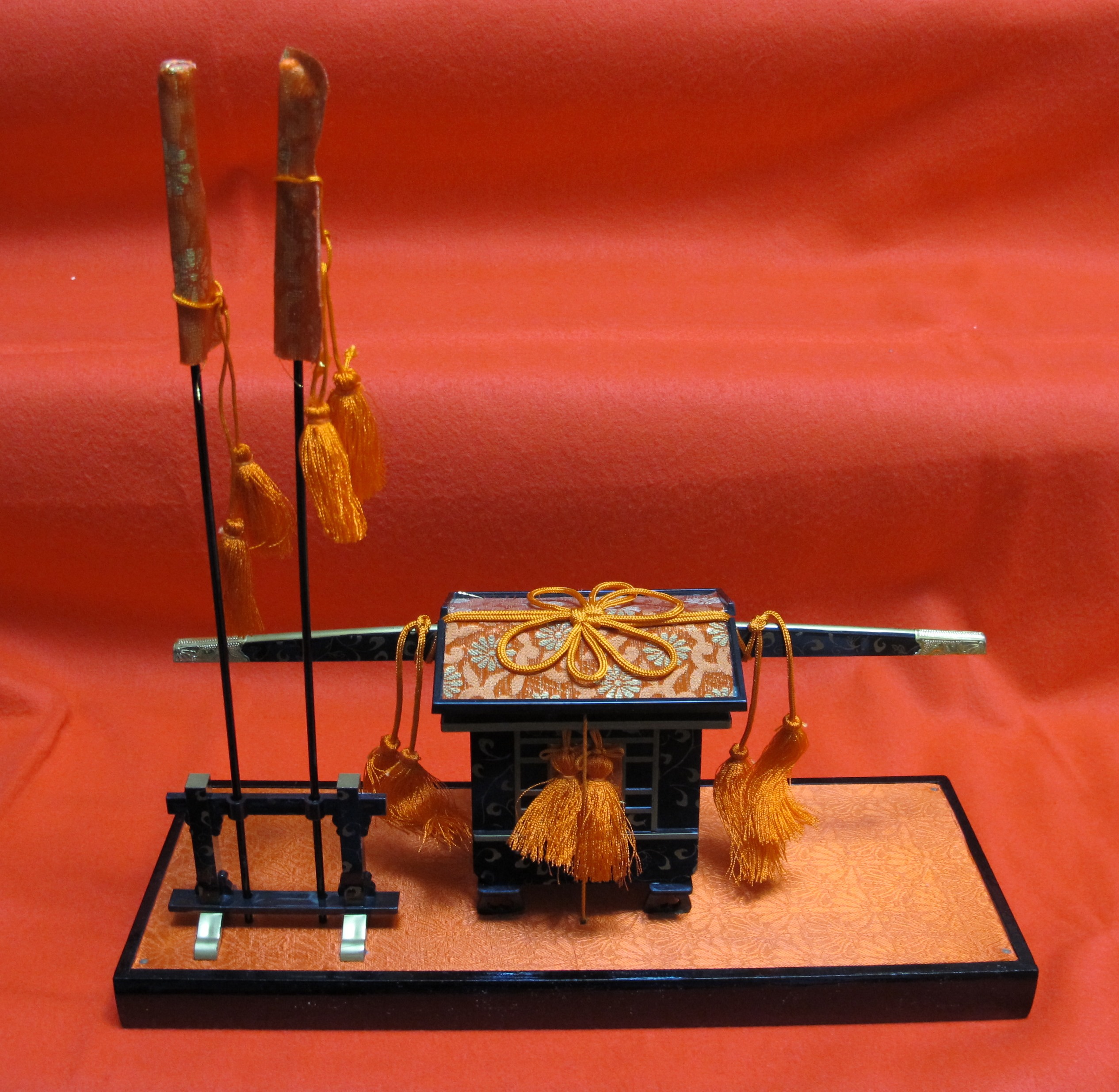 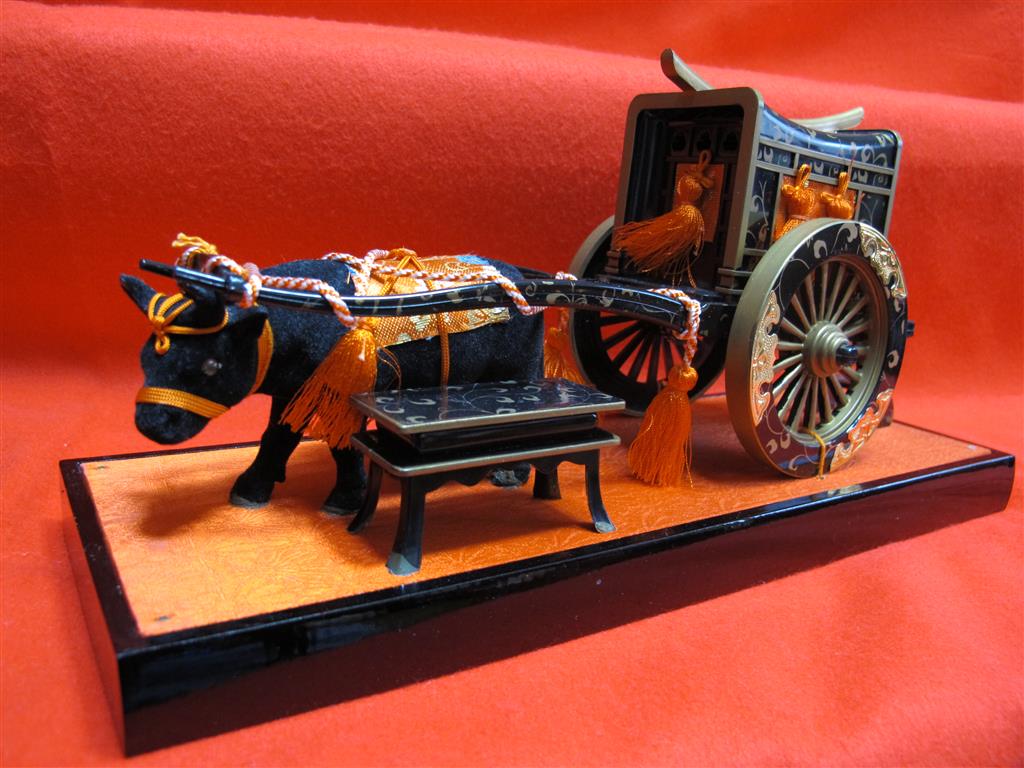 And there we have it: seven tiers and fifteen dolls (the numbers are said to be auspicious) that give us a miniaturised glimpse at how Japanese view their own cultural roots. A set like this is too big for most houses these days, so I feel very lucky to see one for myself. If you would like to see some traditional dolls though, the Kyoto National Museum has an ongoing “Hina Matsuri & Japanese Dolls” exhibition throughout March which may well be worth a look. Our display must be entirely cleared away though, soon after Hina Matsuri is over, for folklore would have it that leaving the dolls out too long, will delay your daughter’s marriage. I fully intend to marry the daughter of this household and so will be happy to help pack it all away. Until then however…

Let’s light the paper lamps!
And decorate with flowers and peach blossom!
Five musicians play with pipe and drum!
Today is so much fun – Hina Matsuri!

You can read the rest of the song lyrics for Ureshii Hina Matsuri in Japanese and English here: http://thejapanesepage.com/audio/hina_matsuri